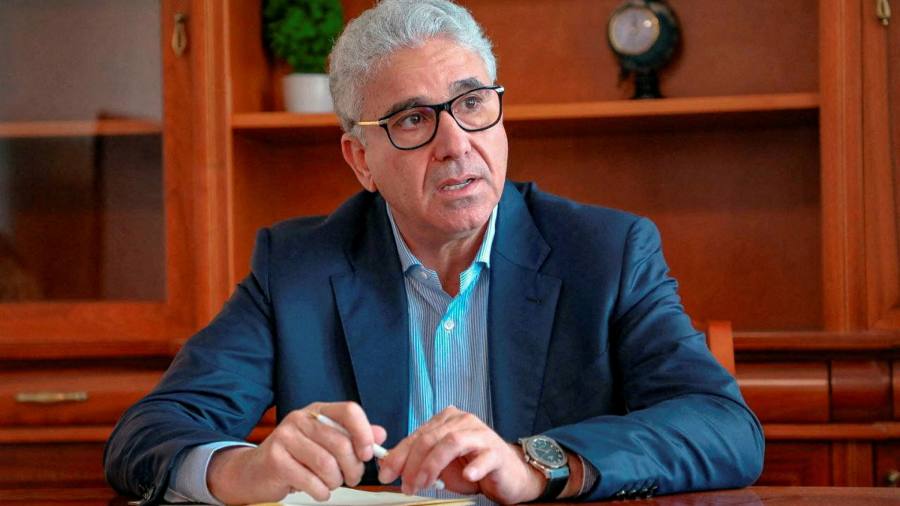 The leader of a new Libyan government has vowed to relocate from the country’s east to Tripoli within “days” to replace a rival administration, despite concerns that such a move risks stoking a fresh bout of fighting in the oil-rich north African state.

Fathi Bashagha’s government was approved by the Libyan parliament this month, establishing a rival to an interim administration in Tripoli that failed to hold December elections. He told the Financial Times this week that he planned to move to the capital in the most “peaceful way possible”, insisting that his government would not be involved in “any violence or conflict”.

“We will be arriving in Tripoli in the next few days and there will not be another parallel government,” Bashagha said in a telephone interview from Tobruk, where the House of Representatives is based. “The reason why we have not entered Tripoli just yet is to avoid what you have pointed out [the risk of conflict]. ”

The Bashagha-led government, which is backed by Khalifa Haftar, the renegade general who controls eastern Libya, is seeking to replace the interim administration based in Tripoli led by Abdul Hamid Dbeibeh. Both have the backing of armed factions and a stand-off between them risks triggering the bitter factional divisions that have blighted the country since disputed 2014 elections. Bashagha said he had reached out to forces on the ground and the political elite to avoid confrontation. Analysts said any move on Tripoli would raise the stakes in the political stand-off.

“It’s a gamble if he goes, because right now the larger part of the forces in the Tripoli area is against Bashagha,” said Wolfram Lacher, a Libyan analyst. “It’s not impossible he would try and then generate momentum when some [factions] shift allegiance in hours and others stand down. But it’s equally possible it would trigger serious fighting in and around Tripoli. “

The UN mission in Libya said on Thursday it was concerned about the mobilization of forces and movement of large convoys of armed groups that have increased tensions in and around Tripoli. Stephanie Williams, the UN envoy, urged restraint.

Mohamed Eljarh, a Libyan analyst in Tobruk, said Bashagha pulled back forces loyal to him from Tripoli to de-escalate the situation after pressure from Turkey and the US. But he warned that while Bashagha was “being restrained,” his coalition partners were threatening to escalate. “Therefore international pressure on him could make him the weakest link in the coalition and lead to it unraveling,” Eljarh said. Turkey was attempting to mediate between Bashagha and Dbeibeh, he added.

The last civil conflict erupted in 2019 after Haftar launched an offensive on Tripoli to oust a weak UN-backed government. It morphed into a proxy war as Turkey intervened militarily to support the besieged government as it fought Haftar. The United Arab Emirates, Russia and Egypt backed Haftar.

Dbeibeh’s government was born out of a truce that ended the civil war and it was supposed to lead the country to elections last December. But they were postponed, with Dbeibeh promising they would be held in June. He has refused to recognize Bashagha’s administration, with both accusing the other of being illegitimate.

Bashagha, who had been interior minister in the UN-backed government that fought Haftar, originates from the western city of Misurata. He is one of Libya’s highest profile politicians and had been considered by some western officials as a potential future leader.

Lacher said that opposition to Bashagha’s government had been exacerbated because of his surprise alliance with Haftar, his former foe.

Bashagha’s government has so far struggled to secure broad international recognition, with Russia its clearest backer, because of concerns over the manner in which the parliamentary vote of confidence took place this month.

A day after the vote, the UN voiced concern over the procedure. Bashagha said the voting process has been “clarified” to the UN and “we’re waiting for a public announcement to clarify their position”.

He said his goal was to lead the country to parliamentary and presidential elections, but gave no timeframe. He said even if Dbeibeh remained physically in the prime minister’s office in the capital, “that does not mean that will stop me from starting my job in Tripoli in another location”.

But Claudia Gazzini, an analyst at Crisis Group, said the concern is that Libya ends up divided again “between two administrations that have a low intensity war”.

The two protagonists could agree to negotiations to settle it, she said, “but it will be difficult”.

“I think Bashagha is still under the illusion he can move into Tripoli without force, because he believes the armed groups there are in his favor, but this might be a miscalculation,” Gazzini said. “The key things to succeed in Libya are money, through control of the central bank, and international recognition, but he’s got neither, for now at least.”