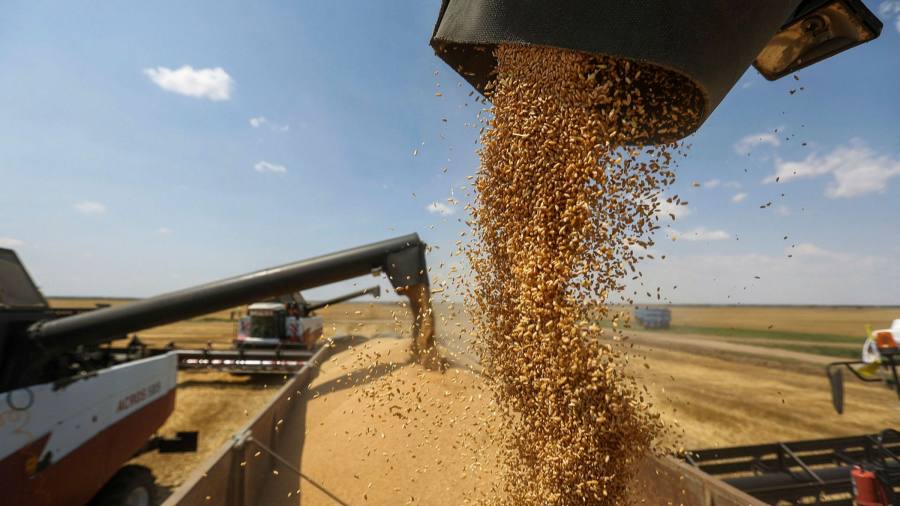 Russia and Ukraine together account for a third of the world’s wheat exports, a fifth of its corn trade and almost 80 per cent of sunflower oil production, according to the US Department of Agriculture.

The attack has led to a ban on all commercial vessels in the inland sea of ​​Azov – which connects to the Black Sea – and the closure of Ukrainian ports. Some 90 per cent of Ukrainian grain exports are transported by sea and the disruption is expected to wreak havoc on food supply flows, analysts said.

The disruption to supplies and the scramble to find alternative sources of grain will hit supply chains already struggling with high demand and rising prices because of poor harvests in key exporting countries such as Canada. “The food price inflation risk stemming from this conflict appears acute,” said Helima Croft, analyst at RBC.

Clive Black, analyst at UK brokers Shore Capital, said: “The current events in Ukraine absolutely lead us to be thinking about the supply chain and inflation outlook with growing concern.”

With Ukraine and Russian inventories of wheat and other grains still waiting to be shipped, analysts said prices would rise further. If a substantial share of the Russian and Ukrainian grain fails to be shipped, wheat prices could rise to levels not seen since the crisis in 2007-08 when soaring grain prices triggered riots in some countries, according to Andrey Sizov at Moscow grains research firm Sovecon .

Ukraine is known as the “breadbasket of Europe” and many countries in the Middle East and north Africa are also heavily reliant on it for wheat supplies. Any disruption in supply would have a severe impact on food security in a number of countries, according to US think-tank Center for Strategic and International Studies.

Lebanon imports 50 per cent of its total wheat consumption from Ukraine, followed by Libya at 43 per cent, Yemen at 22 per cent, and Bangladesh at 21 per cent. “For the 14 countries where Ukrainian wheat is an essential import, almost half already suffer from severe food insecurity,” said Caitlin Welsh, the director of global food security at CSIS.

Other countries reliant on Ukraine and Russia for grain supplies include Egypt, the world’s largest wheat importer, where the two countries accounted for 86 per cent of its wheat imports by value in 2020, and Turkey, where 75 per cent of its overseas purchases of wheat came from Ukraine and Russia. Egypt had wheat inventories until November and had also been diversifying its sources, according to the country’s supply ministry.

For China, about a third of its corn imports come from Ukraine and are used to feed the world’s largest hog herd. “People have corn cargoes booked out of Ukraine,” said Darin Friedrichs co-founder of agricultural research group Sitonia Consulting in Shanghai. Any disruption to those shipments would force Chinese hog producers to scramble for alternative sources including US farms.

The food industry, especially in Europe and the UK, will also be hit by rising energy prices.

The further rise in prices for natural gas, the main ingredient of fertilizer, will affect food prices if farmers can not afford the increase in costs, and could hit crop quality and production if they cut use. Yara, a Norwegian fertilizer company, said in its latest results announcement that high gas prices were a challenge for the industry in Europe, adding to “global food security concerns in a situation with already tight supply across the main nutrients”.