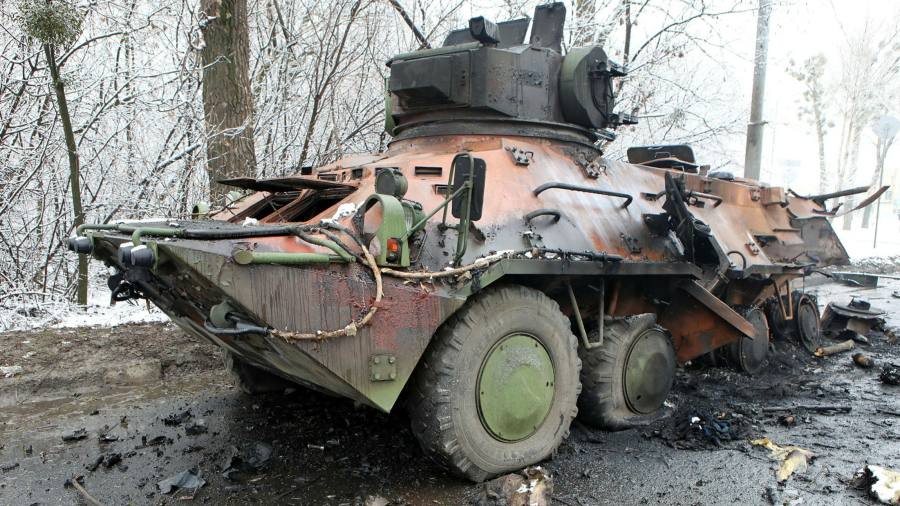 Ukrainian troops repelled a Russian incursion into the eastern city of Kharkiv on Sunday, as Russian forces continued to slowly encircle the capital Kyiv after stepping up an artillery assault on Ukraine’s two biggest urban centers.

Moscow’s apparent strategy of a lightning assault on Kyiv and Kharkiv led by airborne units and special forces has been hampered in the face of fierce resistance from Ukrainian troops, though Russia has made significant gains on the southern coast as it seeks to cut Ukraine off from the Black Sea.

Western intelligence and defense officials said they had been surprised by the level of resistance from Ukrainian troops and their ability to slow the Russian advance and delay Moscow’s key objectives.

But while the invasion has been obstructed by logistical struggles and a failure to capture and hold some strategic sites, officials cautioned that Russia’s superior military capabilities and its ability to continue to ramp up deployments would tell over time.

“The conflict began as a choice made by [Russian president Vladimir] Putin, and the problem is that now having committed himself, it has become a war of necessity, ”said a western official. So Putin needs to win and in order to win Russia may turn to indiscriminate force. . . and I will be very concerned about what they do. ”

Russia’s focus on encircling Kyiv has raised fears of a fierce bombardment of the city and its residents as their ability to flee is curtailed. Residents there have sought refuge in cellars, underground garages and metro stations as they brace themselves for a full-scale assault.

One of Putin’s first acts as president was to oversee a bombardment of Grozny as part of a war on Islamist separatists in early 2000 that left much of it in ruins and killed up to 8,000 civilians.

Overnight on Saturday, Kharkiv in eastern Ukraine, the country’s second-largest city, with 1.4mn inhabitants, was subjected to “intensive exchanges of artillery”, the UK defense ministry said.

On Sunday afternoon, Kharkiv’s mayor said Ukrainian forces were back in full control of the city, after repelling a Russian incursion involving special forces and light vehicles. Citizens were warned to stay in their homes.

There were also unconfirmed reports of Russian airborne troops landing in western Ukraine.

But the Russian military’s key strategic objective still appeared to be the capital.

Russia is “priority[ing] the encirclement and isolation of Kyiv ”, the UK defense ministry said, bypassing other towns as columns of troops sent from Russia and Belarus race towards the city.

Russian troops, which have already taken control of areas north and west of the capital, were fighting for control of Vasylkiv, to Kyiv’s south-west, in the early hours of Sunday morning, Ukrainian officials said.

An oil depot there was set alight, sending flames billowing into the dawn sky, while air-raid sirens blared on Saturday night and Sunday morning.

Meanwhile, in southern Ukraine, Russia’s assault by troops assembled in Crimea, which Moscow annexed in 2014, has seen its forces take control of a number of key locations, such as Melitopol close to the coast.

Russia’s blockage of port cities Berdyansk and Mariupol has in effect created a Russian-controlled land bridge from Crimea to areas of eastern Ukraine held by Russian-backed separatists, according to Rohan Consulting, a conflict analyst.

Separatist forces from the self-declared Russia-backed republics of Donetsk and Luhansk also claimed to have made advances west, into towns north of Mariupol, but these were unable to be independently verified.

If Russia is able to capture or blockade Odesa, a major port to the west of Crimea, it could seal off Ukraine’s access to the Black Sea – the critical export route for the country’s economy.