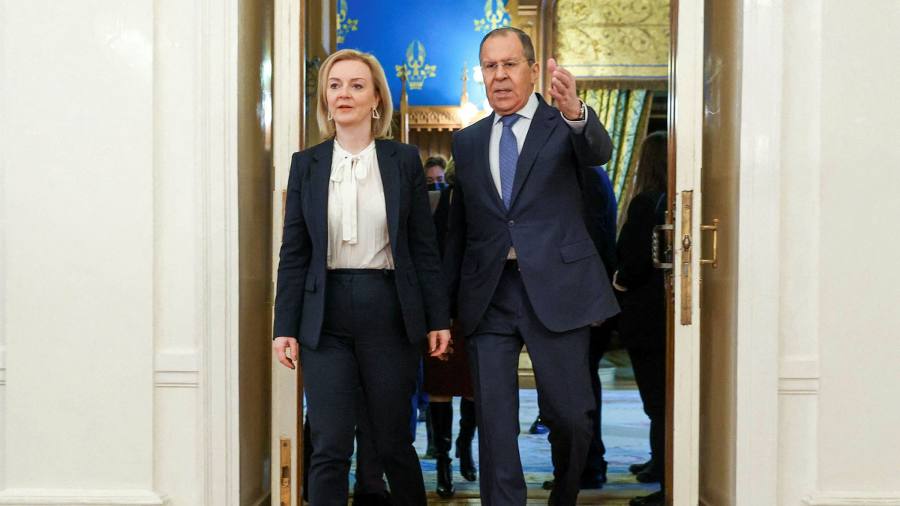 Russia’s foreign minister has described a two-hour meeting in Moscow with his British counterpart as “disappointing” and “a dialogue of a mute person with a deaf person” as European countries continued to struggle in their diplomatic effort to prevent a Russian attack on Ukraine .

Speaking to the press on Thursday, Sergei Lavrov said Liz Truss’s delegation had come “unprepared”, as he reiterated that the Russian military build-up around Ukraine posed no threat and that Moscow’s security demands in Europe had been ignored. Meanwhile, Truss demanded that Russia withdraw the more than 100,000 troops massed on the border with Ukraine.

Truss’s trip – which included a visit to Red Square clad in a fur hat despite the unseasonably warm weather in an apparent attempt to channel images of Margaret Thatcher on a Moscow tour – was the first by a UK foreign secretary to Russia in more than four years .

But Lavrov openly questioned whether there had been a point in holding the meeting. “I am disappointed that our conversation was the dialogue of a mute person with a deaf person,” Lavrov said. “We appear to listen to each other, but we do not hear each other.”

Truss said: “I certainly wasn’t mute in our discussions earlier. I put forward the UK’s point of view on the current situation as well as seeking to deter Russia from an invasion of Ukraine. ”

She disputed Moscow’s argument that NATO’s eastward expansion in the past two decades posed a threat to Russia. “No one is undermining Russia’s security. That is simply not true, ”Truss said.

She instead pointed to the threat to Ukraine posed by Russia, which annexed the Crimean peninsula in 2014, fueled a proxy war in the country’s far eastern Donbas region and has massed troops and military equipment along Ukraine’s eastern flank.

The tone of the comments contrasted with talks held on Monday in Moscow between Presidents Vladimir Putin of Russia and Emmanuel Macron of France that opened with an amicable exchange and lasted more than five hours.

British diplomats had said on Wednesday that Truss would seek to project a harder line with Russia, focusing more on deterrence than other European partners including France by insisting on the economic consequences of another invasion of Ukraine.

“Minister Lavrov has told me today that Russia has no plans to invade Ukraine, but we need to see those words followed up by actions,” Truss said on Thursday. “We need to see the troops and the equipment that is stationed on the Ukrainian border moved elsewhere.”

Lavrov said western concerns about the military build-up, the largest in Europe in decades, were “incomprehensible anxieties”.

His “detailed explanations” had “bounced off unprepared ground”, he went on. “It’s been a long time since I was in diplomatic negotiations that could have been held live on TV, because we did not hear anything secret or confidential beyond the usual grandstanding from London,” he added.

Russian newspaper Kommersant reported that during the meeting, when Lavrov asked ironically whether Truss recognized his country’s sovereignty over Rostov and Voronezh, two Russian provinces near Ukraine where troops are currently stationed, Truss replied: “The UK will never recognize Russia’s sovereignty over those regions” – before being corrected by UK ambassador to Moscow Deborah Bronnert.

Confirming the anecdote, Truss later said it had been a misunderstanding. “There was a point in the meeting where I thought he was talking about a part of Ukraine. But I am very clear that [the area] is a sovereign part of Russia, ”she told Russian news outlet RBC.

One ally of Truss said the talks with Lavrov were “robust” but there was “clearly a healthy level of respect between the two”. Truss invited Lavrov to London for talks in the next few months.

Russia’s ties with the UK sank to historic lows when the former Russian spy Alexander Litvinenko died from poisoning with a rare polonium isotope in London in 2006.

Though other western countries such as the US, France, and Germany have made periodic attempts at unfreezing relations with Russia, the atmosphere with the UK has soured further since the poisoning of another former spy, Sergei Skripal, and his daughter Yulia in Salisbury in 2018 .

The British government on Thursday passed legislation allowing it to impose sanctions on Russian businesses and individuals in sectors including chemicals, defense, extractives and financial services.