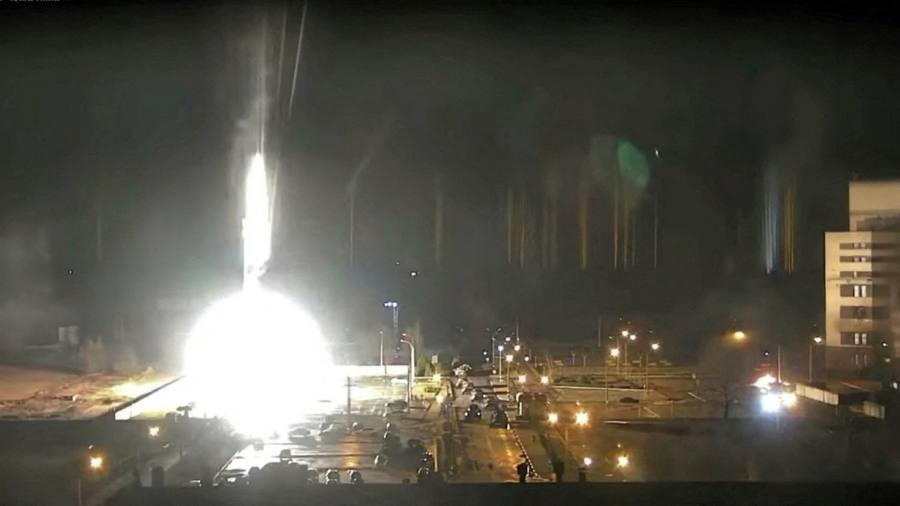 Ukraine’s president evoked the Chernobyl disaster as he condemned the attack by Russian forces on one of its nuclear power plants, the first time in history that an active atomic facility has been targeted.

The assault on the Zaporizhzhia plant, close to the front line in southern Ukraine, sparked a blaze at a building inside the facility which was extinguished quickly. No damage was reported to any of its six reactors, cooling equipment or spent nuclear fuel, and radiation levels were normal.

But experts were unanimous in their criticism of Russia’s assault on what is Europe’s largest atomic power station.

“Firing shells in the area of ​​a nuclear power plant violates the fundamental principle that the physical integrity of nuclear facilities must be maintained and kept safe at all times,” said Rafael Mariano Grossi, head of the International Atomic Energy Agency.

Claire Corkhill, professor of nuclear material degradation at Sheffield University in the UK, said: “For a week after the Russian invasion I was saying reassuring things about the threat to nuclear plants. But now for the first time I’m worried. ”

Zaporizhzhia and Ukraine’s three other active nuclear plants, which together generate about half of Ukraine’s electricity, run Soviet-designed VVER reactors.

They are similar to the pressurized water reactors (PWRs) that dominate atomic power stations worldwide – and are very different from the reactor at Chernobyl, in northern Ukraine near the Belarus border, scene of the world’s worst nuclear disaster in 1986 when its graphite core caught fire.

“Unlike Chernobyl, they have a containment around the reactor,” said Tony Irwin, a nuclear engineer at the Australian National University. “And unlike Fukushima these VVER reactors have separate water circuits to cool the reactor and produce steam,” he added, referring to the site of the 2011 accident in Japan caused by an earthquake.

Even so, a “loss of coolant accident” could take place if both the main electricity supply and its generator-powered back-up failed. Coolant must continue to circulate for a few weeks to remove residual heat after the reactor has shut down, explained Robin Grimes, professor of materials physics at Imperial College London. Otherwise there could be a serious loss of radioactive material from the fuel.

As well as the reactors themselves, the facilities where spent nuclear fuel is stored could pose a radiation threat if they are damaged during an attack. “When the fuel comes out of the reactor it’s still very hot, so it goes into a cooling pond, where it’s most at risk,” said Corkhill. “Later it’s put into dry casks where it’s less of a hazard.”

In an emotional speech after the shelling, President Volodymyr Zelensky said it could have caused as much destruction as “six Chernobyls”. Corkhill said his reaction was understandable, although she played down the risks as being not quite so serious.

While Russian forces were on Friday in control of the Zaporizhzhia facility its Ukrainian staff continued to run the plant. Just one of the reactors is operational, at 60 per cent power, while the others are being shut down or are switched off.

Around Chernobyl itself, 90km from Kyiv, there was anxiety last week when radiation levels rose as Russian forces took over the site. But that turned out to be the result of vehicles churning up radioactive dust around the remains of the stricken reactor, now entombed in a huge steel and concrete sarcophagus within a steel containment structure.

Most experts believe Chernobyl poses less of a threat than Ukraine’s operating nuclear plants, as long as basic maintenance operations continue and there is no deliberate attempt to destroy the containment facilities.

“I have been in touch with Ukrainian colleagues in the Chernobyl zone,” said Corkhill. “They are working but are not allowed to leave the site and go home – and that arrangement can not continue indefinitely.”

The significance of Chernobyl as a symbol of nuclear disaster led Grossi, the IAEA chief, to ask Ukrainian and Russian government representatives to meet him there as soon as possible, to agree safeguards that would allow nuclear plants to operate safely without threat of attack.

Meanwhile, the world’s nuclear industry is watching events in Ukraine with trepidation. Just as its reputation suffered from past accidents at Three Mile Island in the US, Chernobyl and Fukushima, the sector fears bad news in Ukraine could damage the sector’s potential revival as a source of carbon-free energy in the battle against climate change.

“It will polarize opinion,” Grimes said. “Even if nothing bad happens, some people will say: ‘Look at what might have happened’.”