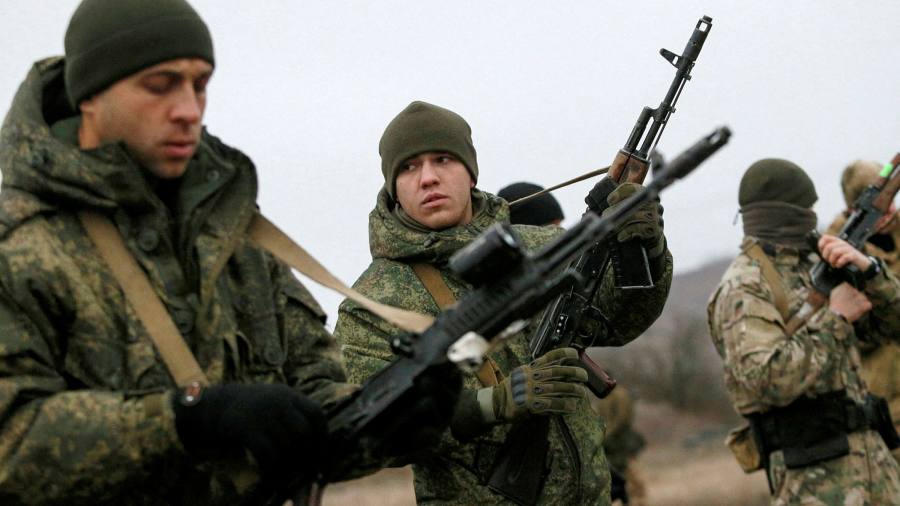 Russia and the Moscow-backed separatists in Donetsk and Luhansk have made increasingly lurid accusations against Ukraine in recent days, claiming attacks that Kyiv flatly denies and many observers believe to be falsified pretexts for starting a war.

Russia’s army on Monday claimed a Ukrainian “sabotage and reconnaissance group” and two armored personnel carriers had penetrated the Russian border, leading to a firefight in which Russia’s army said it killed five Ukrainian soldiers and destroyed both vehicles.

The claims were made as Russia’s President Vladimir Putin on Monday moved to recognize the separatist-controlled Donetsk and Luhansk regions, ratcheting up international concern over the crisis.

They were accompanied by state media footage of rubble and remnants of attacks. Open source investigators at the Bellingcat group have poked holes in some of these videos, alleging at least one shared by the separatists likely had audio of gunfire lifted from a YouTube video.

No Ukrainian armored personnel carriers or saboteurs crossed any borders, he said. “None of that happened. So basically it’s a virtual war, it’s a war which exists in the information space. It does not exist in reality. ”

Whatever their credibility, Moscow’s claims of Ukrainian incursions, which analysts said were targeted largely at a domestic Russian audience, have pushed Kyiv into a defensive position. “Ukraine does not plan any such actions,” Dmytro Kuleba, Ukraine’s foreign minister said. “Russia, stop your fake-producing factory now.”

The conflicting accounts have bolstered US claims in recent weeks, citing intelligence, that Moscow planned to fabricate incidents that would serve as a case belli for launching military operations in Ukraine.

“Prevention by disclosure is a well-known method for activities whose success is based on being unexpected,” Zagorodnyuk said. “A false flag operation that is disclosed in advance, it delegitimizes itself to a great extent.”

“But it seems like they’m so stuck with this plan that they go with it anyway, even if it’s already delegitimized even before it started. So that’s weird, ”he added.

Apart from the conflicting accounts emanating from Moscow and Kyiv, people following the conflict in Ukraine and the west noted with worry Putin’s use of emotive language similar to the kind that preceded Russia’s incursion into Georgia in 2008.

In a joint press conference with Germany’s Chancellor Olaf Scholz last week, Putin repeated a claim he had made before that “genocide” was happening in the Donbas.

Putin has also repeatedly – including during Scholz’s visit – made an analogy between the conflict in Ukraine and NATO’s 1999 bombing of Yugoslavia during the Kosovo war. Some observers interpreted this as laying the groundwork for “humanitarian” intervention on behalf of Russian passport holders who live in the Donbas’ two breakaway republics.

“These messages of ‘genocide’ and of Ukraine being the aggressor are targeting Putin’s domestic audience with the intention to claim that Russian intervention serves some kind of greater purpose, that they are protecting the local population,” said Natia Seskuria, associate fellow with the Royal United Services Institute.

“What we are seeing now is just the preparation for a pretext for a military invasion,” Seskuria said.

Analysts said that while Russia’s military plans were still murky, its mounting allegations were also intended to pile on pressure to Volodymyr Zelensky’s administration.

“This is a psychological operation. They need to break Zelensky, to force him to sign the concessions, ”Oleksandr Danylyuk, chair of Center for Defense Reforms in Kyiv.

Moreover, he added, “they need to break the west and force them to break Zelensky, as he is not going to be broken by Russia”.

As Moscow moved towards recognizing the Luhansk and Donetsk “republics”, Kuleba, the Ukrainian foreign minister, urged restraint. “A lot of emotions out there, but it’s exactly now that we should calmly focus on de-escalation efforts,” he said. “No other way.”