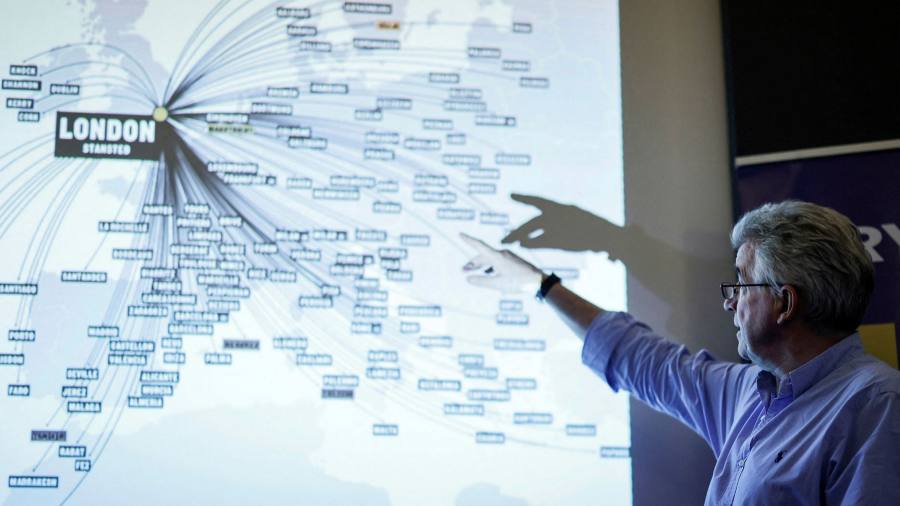 Ryanair boss Michael O’Leary has warned that the travel industry faces a “very difficult” period but has insisted the long-term recovery of its airline remained on course despite Russia’s invasion of Ukraine.

The Irish carrier and its rivals have been forced to cancel and divert some flights because of airspace closures, while also facing surging fuel costs after the price of oil rose above $ 100 a barrel.

“I think it’s going to be very difficult for most airlines for the next 12 months,” O’Leary said on Wednesday.

Aviation consultancy IBA has forecast that the industry’s recovery from the pandemic will be delayed by at least two months after shares took a tumble. The MSCI index of European airline shares has lost nearly a fifth of its value over the past two weeks.

But O’Leary expects Ryanair to ride out the disruption.

Bookings fell 20 per cent week on week on Thursday and Friday following the start of military action in Ukraine, but have since recovered and were down about 9 per cent by the start of this week, O’Leary said.

“I think it will not have a dramatic impact on bookings, clearly if the war does not escalate and spread elsewhere,” he added.

Ryanair has hedged 80 per cent of its expected fuel needs at $ 65 per barrel until March 2023, leaving it well protected from the sudden spike in prices and able to outcompete its rivals on ticket prices, O’Leary said.

But the airline still expects to take a $ 50mn hit on fuel over the next 12 months.

“It is not a huge amount of money, but it certainly makes post-covid recovery much more difficult,” he added.

Ryanair and Hungarian rival Wizz Air have been forecast to emerge from the pandemic as long-term winners thanks to healthy balance sheets and ultra-low operational costs.

However, London-listed Wizz does not hedge fuel, leaving it badly exposed to oil price rises.

“Wizz, who like to portray themselves as a competitor to Ryanair. . . are completely unhedged, which is a crazy place to be, ”O’Leary said.

Wizz moved to reassure investors on Wednesday and said it expected its operating loss for the year ending in March to be “materially consistent” with previous forecasts.

Wizz will fly 7 per cent fewer flights in March than originally scheduled, but chief executive Jozsef Varadi said plans would be redeployed to other parts of its network.

“The commercial and commodity impact behind the geopolitical crisis was in part offset by the improving post-Covid trading environment,” the airline said.

Ryanair will fly its biggest ever schedule from the UK this summer and O’Leary said he expected ticket prices during peak periods to rise because of higher fuel charges and greater demand for travel.

Ryanair would probably suffer losses around the middle of its forecast of between € 250mn to € 450mn for the year ending in March, he added.

Ryanair flew to four airports in Ukraine before the war began. O’Leary said aircraft would be redirected to other parts of Europe “for the foreseeable future”.

“We do want to see Ukrainians succeed. . . as soon as we can return there we will, ”he added.