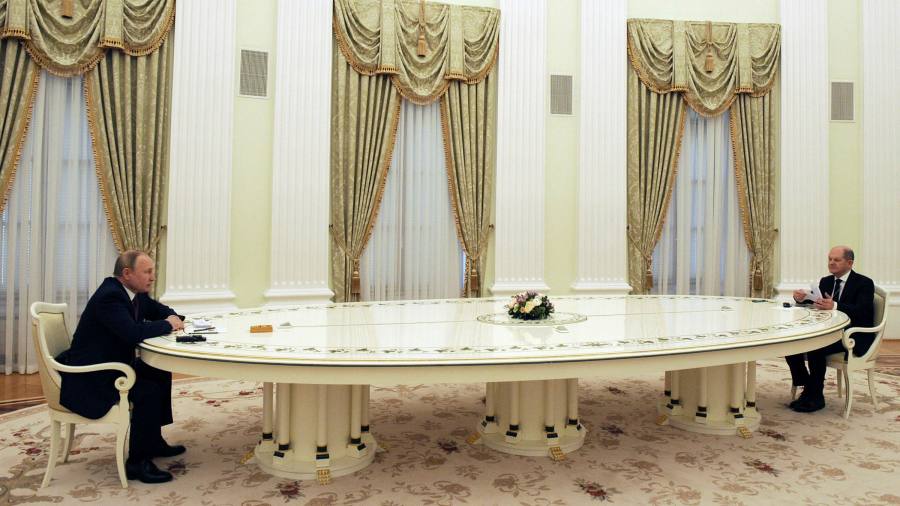 The writer is Fritz Stern Chair at the Brookings Institution

Would he, like President Emmanuel Macron of France, be lied to by Vladimir Putin? Would he be humiliated, like UK foreign secretary Liz Truss at the hands of her counterpart Sergei Lavrov? Worse, would the Russian president ensnare him in a bogus peacemaker role, setting him up as a 21st century Neville Chamberlain?

Many western diplomats were holding their collective breath as Olaf Scholz, Germany’s new chancellor, flew into Moscow on Tuesday for the latest last-ditch diplomatic effort to stave off war in eastern Europe.

In the end, none of these three scenarios unfolded. At the post-meeting news conference, the tone was crisp – no smiles, no first names. Putin slipped into a falsehood about “genocide” in Ukraine’s breakaway Donbas region. But he indicated that he was open to talking about intermediate-range missiles and the scope of military exercises, provided the west was willing to discuss his grievances. Just before Scholz’s plane landed, the Russian government announced a partial withdrawal of the troops encircling Ukraine.

Scholz held his ground. It was their “damned duty and job” to “prevent a warlike escalation”, he remarked. He repeated the threat of dire consequences in case of Russian aggression; troop withdrawals were good, but more would have to follow. He listed western concerns about human rights in Russia and the incarceration of opposition leader Alexei Navalny.

On Ukraine’s bid for NATO membership – which the West refuses to exclude and the Kremlin refuses to accept – Scholz said: “That is not an issue we will likely encounter while we are in office.” Then, with a slow grin, he added: “I do not know how long the president intends to stay in office. I’ve got a feeling it will be a long time, but not forever. ”

Later, there was speculation on social media that the remark on Ukraine was a concession of principle. In reality, it was a shrewd deflection of the issue. In essence, Scholz is proposing a way to put the dispute in the freezer: membership not now, but also not “never”.

But when was the last time Putin was implicitly called a dictator to his face – and reminded that even his grip on power must end some time? It must have irritated the Kremlin that the person sliding this lethal quip in so neatly was a German chancellor, and a Social Democrat to boot.

Indeed, it seems Putin has performed a miracle and forced Scholz’s SPD, not previously known for looking too severely on the Kremlin, to educate itself. The last straw was the announcement – just days before Scholz’s first trip to Washington – that Gerhard Schröder, Germany’s SPD chancellor in 1998-2005 and the original Putinversteher, would join the board of the state-controlled energy giant Gazprom. This was preceded by such a cacophony of reality-denying statements from Berlin that Scholz’s US visit turned into a damage limitation exercise.

After his return, the SPD parliamentary group held an emergency meeting to impose a more critical line. Jessica Rosenthal, leader of the SPD’s youth group, showed more courage than most of her party elders by calling Russia “the aggressor” and Schröder a “representative of Russian interests”.

Last Sunday, President Frank-Walter Steinmeier – a former close associate of Schröder who had accused Ukraine of “saber-rattling” in the past – swung into line with a forceful speech after his re-election as head of state. “Do not underestimate the strength of democracy!” he warned. “I call on President Putin: loosen the noose around Ukraine’s neck!”

Scholz himself underwent a transformation. Wooden and thin-lipped in the afternoon standing next to President Joe Biden, by dinnertime he convinced a gaggle of US senators that he would be reliable. He made a point of going to Kyiv, visiting the memorial to the fall of the 2014 Maidan revolution, and promising more financial support for Ukraine, before heading to Moscow.

Are we witnessing not just the education of a chancellor, but his emancipation from his party? Possibly. But the SPD’s pacifist leftwing remains a force to be reckoned with. Nato records no de-escalation or withdrawal of Russian troops. The Duma is asking Putin to recognize the Kremlin-backed Donbas statelets. Belarus is all but integrated into Russia. Moscow has not given up on subverting Ukraine’s westward path.

In fact, its goals are much greater: the rollback of eastern Europe’s democratic transformation, the neutralization of western Europe and the departure of the US from the continent. That is the extent of the challenge. It is what the SPD, and Scholz, have yet to admit.