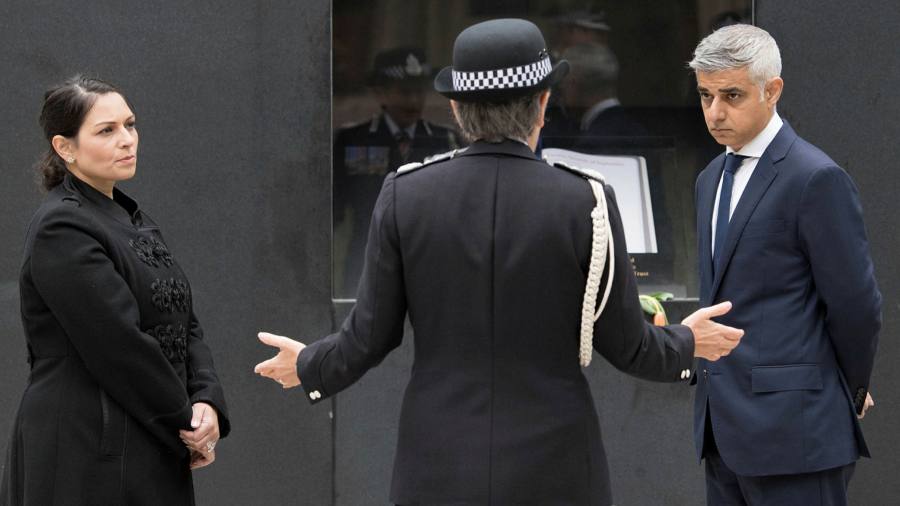 The UK government is embarking on the search for a new head of London’s Metropolitan Police, to lead the force out of its worst crisis in 20 years after Dame Cressida Dick’s unexpected resignation.

Home secretary Priti Patel, who is responsible for appointing the commissioner, the country’s most senior police officer, said she wanted Dick’s successor to be “focused on the basics”, such as reducing violence and tackling the abuse of women and girls.

“It is clear that strong and decisive and new leadership will be required to restore public confidence,” she said in a statement on Friday.

The new commissioner will take on a service that has been engulfed in scandals involving racism, sexism, misogyny and homophobia that have emerged since Wayne Couzens, then a serving Met officer, abducted Sarah Everard last March in south London, and raped and murdered her.

A Home Office insider said the appointment process would take “months”, with Dick staying on for an unspecified interim period. That may mean she will lead the force as it concludes its investigation into the parties in Downing Street and Whitehall during Covid restrictions.

However, in making the appointment, Patel is obliged to show “due regard” for the views of London mayor Sadiq Khan, who precipitated the succession crisis on Thursday by summoning Dick for a crisis meeting that prompted her to resign that evening.

Khan was moved to act over what he regarded as the commissioner’s inadequate response to his demand for culture change following a damning report by the Independent Office for Police Conduct on issues at the force’s Charing Cross station in central London.

The report, published on February 1, found that officers had shared messages full of racist, sexist and homophobic material, including confessions of committing domestic abuse and misuse of steroids.

One senior City Hall official said the mayor was “furious, disgusted and appalled” by the Charing Cross report, which he regarded as the “final straw” after myriad other crises.

Last October the Met apologized for mishandling the search for Nicole Smallman and Bibaa Henry, two mixed-race sisters later found murdered. In December, two officers were jailed for criminal misconduct after taking photos of the women’s bodies and sharing images of the crime scene on WhatsApp.

Also in December, an inquest jury found there were “fundamental failings” in the force’s investigation of four killings in 2014 and 2015 of young gay men by Stephen Port and that, if the first death had been properly investigated, the remaining three men’s lives might have been saved.

One senior policing figure, speaking on condition of anonymity, said Everard’s murder could prove to be “every bit as significant” for policing as the 1993 murder of black teenager Stephen Lawrence in south London. Lawrence’s killing and the Met’s subsequent botching of the investigation led to the 1999 Macpherson report, which found the force “institutionally racist” and made 70 recommendations for comprehensive reform.

Veterans of the Met have said the report and the reforms pushed through by then home secretary Jack Straw delivered significant improvements to the force’s culture.

At the heart of the challenges facing the new commissioner will be the question of how to reform a culture that, according to people with experience of it, is highly defensive and closed to outside influences.

One consultant with experience of working in the force, who asked not to be identified, called it “incredibly insular, almost arrogant” and that officers had learned to circumvent accountability mechanisms introduced after the Macpherson report.

“There’s no humility,” the person said.

Insiders regard tackling the cultural challenges as a higher priority than structural change. However, there have been frequent suggestions that the Met might work better if its national responsibilities, such as counterterror policing and diplomatic protection, were hived off to a separate body, possibly the National Crime Agency.

Babu said it was important to retain an “overarching structure” to allow rapid transfers of staff in emergencies like terrorism incidents.

“Where you start being in different organizations, it can be quite tricky,” he said.

A person close to the mayor stressed that Khan was focused on finding a successor quickly, to reduce instability within the Met. Babu insisted there was “enough talent” to find a credible successor to Dick.

There has also been speculation that Stephen Kavanagh, a former chief constable of Essex Constabulary and now at Interpol, the international policing body, could be a contender.

Babu said the key was to find someone far more open to outside influences than Dick, whose loyalty to the Met proved her undoing.

“It’s about making sure whoever takes over understands the importance of communities and makes sure they engage with [outside] organizations even when they are saying things that are challenging, ”he said.

Canada’s truckers and the politics of anti-vaccine protests


The Met police chief finally falls on her sword