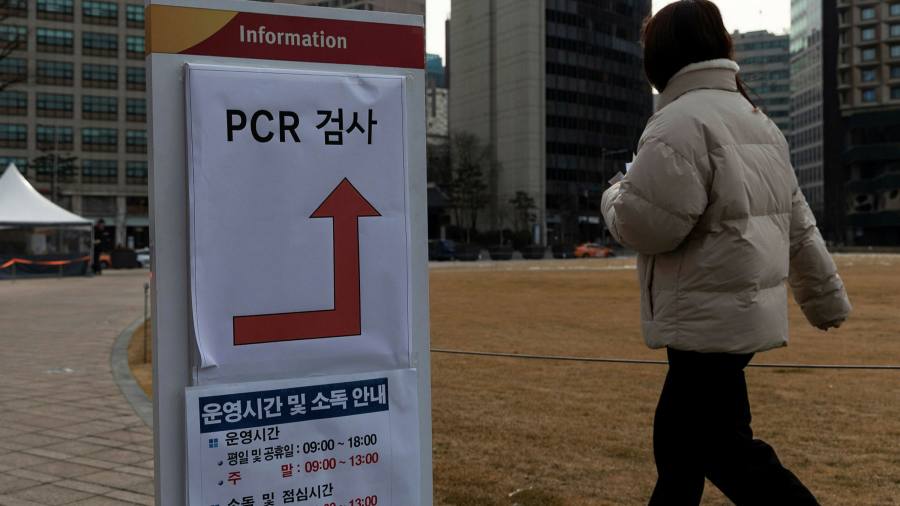 South Korea is abandoning its vaunted test-and-trace system in the face of a surge of Omicron cases that threatens to overwhelm the country’s health system.

Since 2020, President Moon Jae-in’s government has been widely credited for an effective pandemic response that involved mass testing and aggressive contact tracing.

Health officials used GPS monitoring and daily check-up calls even to young patients at low risk of severe infection. But having passed 1mn coronavirus cases over the weekend, South Korea said it would focus its resources on the elderly and vulnerable.

On Monday, Jeong Eun-kyeong, head of the Korea Disease Control and Prevention Agency, said that the speed of transmission of the Omicron variant had forced health authorities to change their approach.

“We are planning to transition towards an antivirus strategy that’s concentrated on maintaining essential social functions while dealing with huge numbers of infections and people placed under quarantine,” said Jeong.

South Korea has recorded just 6,886 Covid-related deaths and avoided a national lockdown throughout the pandemic, which helped its economy grow by 4 per cent last year – its highest annual growth in 11 years.

But since Friday, the country has recorded more than 35,000 cases per day, up from about 7,000 daily infections reported two weeks ago. Health authorities estimate that daily cases could reach between 130,000 and 170,000 by the end of the month.

People younger than 60 with no underlying medical conditions who test positive for Covid will now be expected to monitor their own condition, while family members from the same household will be free to go out to buy medicine, food and other essentials.

Those who test positive and are not suffering symptoms after seven days will not be required to take a PCR test before emerging from quarantine. Health officials, who until now have monitored the movements of those in quarantine, will be redeployed to assist with at-home treatment for the severely ill.

The shift in policy reflects the intense pressure on the supply of laboratory tests and the capacity of health authorities to keep a close eye on those in quarantine.

Seoul’s approach is in marked contrast to the zero-covid policies of China and neighboring North Korea. Hong Kong remains committed to zero-Covid despite a record number of cases reported over the weekend.

South Korean health officials have attempted to reassure the public of the Omicron variant’s relative mildness compared to the Delta variant, with some referring to the benefits enjoyed by countries that had pursued a “herd immunity” strategy.

Nearly 86 per cent of South Korea’s 52mn population have been double vaccinated, with more than 53 per cent having received booster shots.

But Kim Woo-joo, a professor of infectious disease at Korea University Guro Hospital, said that while Omicron’s infectiousness had rendered South Korea’s previous approach unworkable, a “sudden change” in the country’s strategy “could bring about chaos on the medical front”.

“It is the irony of the success of [South Korea’s quarantine policies]. With just a million cases so far, there are too few people who have immunity from natural infection, despite the high inoculation rate, ”said Kim.

“The new cases will continue to spike until at least March before they fall. The country has a long way to go before forming herd immunity. ”