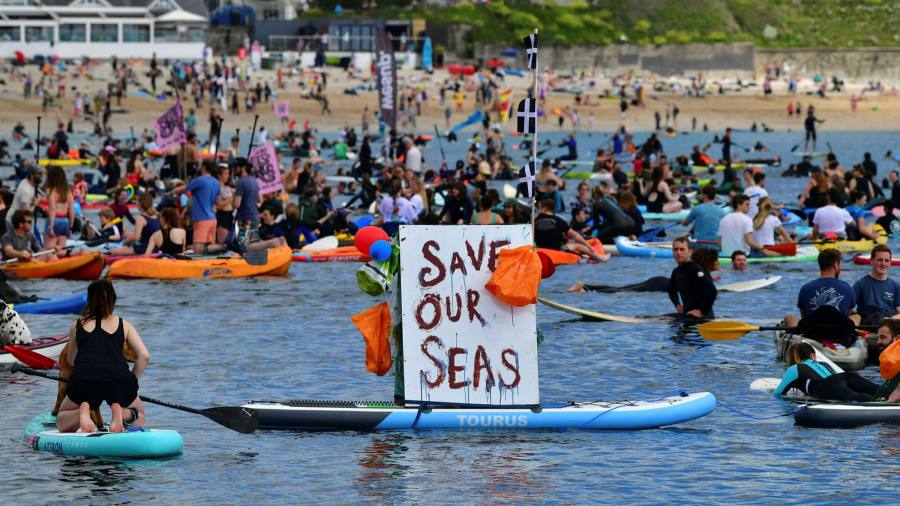 The white sand beaches of Devon and Cornwall are some of the most popular tourist destinations in Britain. Unfortunately, their coastal waters and rivers are also among the most polluted.

Last month the Environment Agency hit South West Water with the lowest environmental rating of the nine large privatised sewage and water companies in England and Wales. The regulator singled out the regional monopoly for poor performance, saying in 2020 it had been “consistently unacceptable” for the 10th year in a row.

South West Water’s dismal record on pollution is one of a number of dubious distinctions for its owner Pennon Group, which include charging the most expensive water bills in the UK, performing poorly on leakage and ramping up debt levels to one of the highest per household.

Almost all the water companies in England and Wales have slashed capital spending since they were privatized 31 years ago. But Pennon, one of three stock market listed providers of water and sewage services in the UK, with a market value of £ 2.8bn, has wielded the ax most vigorously.

After a brief surge in investment in the first few years after privatization, South West Water, which provides services to Devon, Cornwall and small parts of Dorset and Somerset, has almost halved real-terms capital investment in infrastructure.

Its annual spending fell from a 1990s average of £ 320mn to £ 169mn in the 2020s, according to Financial Times analysis of Ofwat data and company annual reports.

Cuts to investment in its waste water system since privatization have been even sharper, falling 60 per cent from £ 185mn a year in the 1990s to £ 74mn in the past decade, according to Ofwat.

These cuts are greater than the national average. Total capital investment across England’s water and sewage companies has fallen by 16 per cent, and wastewater capital investment by 19 per cent in real terms since privatization.

Pennon argues that cuts to capital expenditure followed a substantial injection in the 1990s, which was needed because of poor infrastructure before privatization.

Yet the consequences of that decline are evident not just in the outpouring of sewage and storm water that periodically flow into coastal waters, but also in problems such as the burst pipes that in January left residents in a small Cornwall village without water for 36 hours.

While most other water and sewage companies have managed to reduce leakage since 2018, in Devon and Cornwall water lost through bursts and cracked pipes has increased by nearly 5 per cent over the past three years.

Pennon said it was “committed to delivering a step-change” and “2022/23 will see the highest level of capital investment in the past 10 years”.

“We have some of the best waters in Europe, this year achieving the highest ever bathing water quality at 100 per cent across the south-west compared with [about] 28 per cent in 1991, ”it said.

But while the beaches are often commended for their blue-flag high-quality status, Hugo Tagholm, chief executive of campaign group Surfers Against Sewage, said the sporadic bathing water testing regime, only carried out between May and September, could “mask the reality of sewage spills and the risk they pose to human health ”.

“Even beaches rated as having excellent water quality can suffer from multiple sewage events across the bathing season, let alone out of it,” said Tagholm, who has successfully pressed water companies to release information about sewage spills to warn swimmers.

Surfers frequently become sick from exposure to sewage effluent, he said, while a study by Exeter university found that they were three times more likely to have antibiotic resistant e-coli in their gut than other people.

Yet, despite the environmental failures and criticism in November by Ofwat over poor service, South West Water’s customers are paying the highest bills in England, currently an average of £ 503 a year for water and wastewater combined.

The bills would be even higher without a taxpayer subsidy of £ 50 per customer. This was introduced by the government in 2013 as it accepted that higher bills were needed because the company served just 3 per cent of the population, but had to protect about a third of the country’s coastal waters. From April, Pennon said bills would fall to £ 472 a year, lower than a decade ago.

Residents are in part paying to service South West Water’s borrowings, which are one of the highest per customer. Although it cut its debt by £ 1.1bn, bringing it down to £ 2.2bn in September 2021, it had none when it was transferred into private hands three decades ago.

In addition, it is the only water company in England and Wales to have raised dividends each decade since privatization, according to FT analysis of Ofwat data.

The figures, which include payments to parent companies, showed that the group increased dividends by about 30 per cent in real terms since privatization, from £ 136mn a year on average in the 1990s to £ 178mn a year in the first two financial years of the 2020s.

Pennon said South West Water’s customers benefited from dividend payments as “one in 16 is a shareholder, thanks to our pioneering customer share ownership scheme”.

The group has also been on the acquisition trail, using some of the proceeds of a £ 3.7bn sale of its waste processing business Viridor to private equity firm KKR three years ago. It bought Bristol Water last year, having already taken over Bournemouth Water and the license for the Scilly Isles.

The acquisitions are part of the company’s “focus on sustainable growth in the water sector and its commitment to the whole south-west”, it said. “Pollution performance remains a key area.”

But many of the region’s residents say the company should focus on improving infrastructure more quickly.

“The water-loving public have had enough of sewage slicks and spills,” said Tagholm, who wants more accountability from executives and shareholders. “The message is clear – South West Water must clean up its act.”