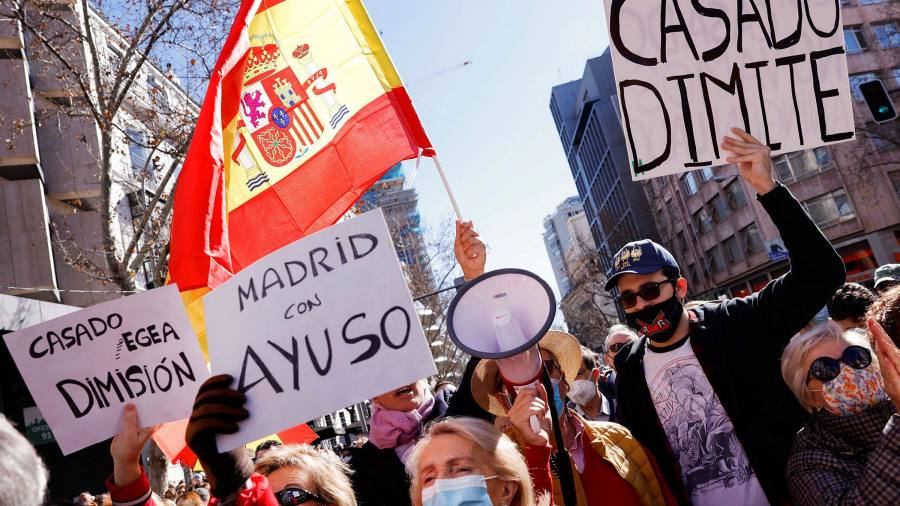 Pressure is mounting on Spain’s opposition leader to end a damaging internal conflict that threatens both his own position and the election prospects of his center-right party.

Pablo Casado, national head of the People’s Party (PP), has been urged to call an extraordinary party congress as he seeks to placate regional leaders and grassroots supporters infuriated by his handling of the crisis.

Several members of the PP’s parliamentary group on Tuesday also called for a leadership election to address the “extreme gravity” of the internal strife.

The feud centers on Casado, party leader since 2018, and Isabel Díaz Ayuso, the charismatic leader of the Madrid region since 2019 and widely seen as a future PP leader.

Casado was forced into an embarrassing climbdown last week after publicly attacking Díaz Ayuso for allegedly using her position to help her brother gain a € 55,000 commission from a € 1.5mn deal to supply face masks to Madrid’s health services in 2020. Díaz Ayuso denies any wrongdoing and accused Casado of being behind the allegations, which surfaced in the media last week.

She also accused the PP leader of trying to “destroy” her by fabricating corruption claims and resorting to espionage in an attempt to uncover compromising information about her.

Casado denies any wrongdoing. He agreed to drop his call for the party to investigate the corruption allegations, effectively resolving the issue in Díaz Ayuso’s favor. But his attempt at appeasement has failed to pacify opponents within the PP.

A PP congress, the only body with powers to elect a new leader, is not scheduled until July. But Carla Subirana, Europe analyst at the Economist Intelligence Unit, said the party was likely to call one within days in an attempt to restore stability.

The bitter dispute comes as the PP faces a growing challenge to its status as opposition leader from Vox, its hard-right rival.

Vox has surged in recent polls and is expected to enter a regional government for the first time after making big electoral gains in Castile-León, where the PP has held sway for the past 35 years.

“The PP’s crisis has important implications for the future of the Spanish right,” said Antonio Barroso, deputy director of research at Teneo Intelligence. “How far Vox advances in the polls, however, will be contingent on how quickly the PP can find a leader who can unify the party.”

The PP’s chances of winning the next general election, due in 2023, “will be slim unless they appoint a new leader”, he added.

Thousands demonstrated outside the PP’s headquarters in Madrid at the weekend to show support for Díaz Ayuso. A poll published by the El Confidencial newspaper showed 71 per cent of PP supporters would prefer her as Spain’s next prime minister, compared to only 14.5 per cent favoring Casado.

Fourteen of the PP’s 17 regional leaders, including its powerful “barons” based in the party’s strongholds, reportedly called on Tuesday for a snap congress and leadership elections. Alberto Núñez Feijóo, the longstanding head of the regional government in Galicia, is seen by many as the strongest contender to succeed Casado.