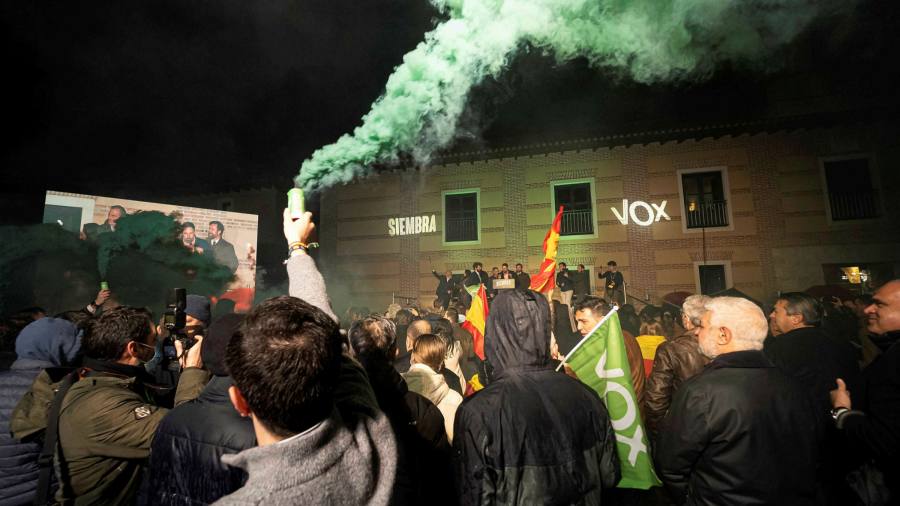 Fuensaldaña hardly exudes power, but the village in Spain’s heartlands of Castile-León is part of an upheaval that spells trouble for the country’s beleaguered center-right opposition.

Locals have given up hope of converting their 15th-century castle into a luxury hotel and reports suggest wolves have taken up residence in the neighboring hills.

But a strong performance by the hard-right upstart Vox party in Castile-León’s regional elections this month, coupled with the bitter feud that has ignited inside the center-right People’s Party, have the potential to reshape Spain’s political landscape.

Days of recriminations involving accusations of corruption and espionage culminated on Thursday with the party engineering the exit of Pablo Casado, its national leader.

The dispute, which pitted Casado against the party’s rising star, Isabel Díaz Ayuso, head of Madrid’s regional government, has underscored the weakness of the PP as it struggles to hold on to voters attracted by the populist message of an uncompromising new adversary.

The effect of this turmoil “will still be felt in the general election scheduled for 2023”, said Carla Subirana, Europe analyst at the Economist Intelligence Unit. “Voters are likely to punish the PP for the benefit of Vox.”

Traditional center-right parties in most other European countries, including France and Germany, have faced similar pressures from the hard right.

In Fuensaldaña, as in Spain as a whole, politics has moved fast since the days when the country was classified as an exception to the rise of the European far right because of an experience of fascism that was still within living memory.

Instead, there is now a real prospect that Vox could become the leading opposition party. It won almost 18 per cent of the vote in the Castile-León regional election, up from 5.5 per cent in 2019, and in the aftermath of the Casado crisis has overtaken the PP in two national polls. In Fuensaldaña, Vox came first.

“Lots of people here like me think the PP is weak and have voted for Vox,” said José Juan Fidalgo, who runs a woodwork company in the village.

He said Casado lacked charisma compared to Santiago Abascal, Vox’s leader, and Ayuso, who emerged the victor in the PP’s internal war. “She should be our first female prime minister,” Fidalgo said.

Ayuso, however, is not yet seeking a national role. She instead joined the overwhelming majority of PP regional leaders in backing Alberto Núñez Feijóo, head of the Galician regional government, to take over from Casado at an extraordinary party conference in April.

Casado is reported to have agreed at a PP meeting late last week not to back a challenger to Feijóo in return for being allowed a dignified exit at the conference rather than being forced to quit immediately.

Feijóo has established his authority by winning four consecutive absolute majorities in the northwest Galicia region. His backers are now counting on his moderate, center-right approach to rebuild the PP as a credible leader to oust the Socialists of prime minister Pedro Sánchez from power.

His biggest challenge will be to give the PP a message compelling enough to win back voters tempted to back Vox. Many in Fuensaldaña expressed reservations about Vox’s plans to clamp down on immigration and scrap gender violence legislation but said they wanted stronger opposition to the Socialist-led government.

Casado had insisted that his party should not form a coalition with Vox in Castile-León, for fear of setting a precedent for other regions or the nation as a whole. But his departure gives the regional party a free hand.

In an interview with the Financial Times last year Casado – seemingly inadvertently – highlighted two of the problems that would bedevil his leadership. He declined to give a straight yes or no answer on whether Vox was a democratic party and expressed frustration with extensive media coverage of other PP leaders, including Ayuso.

It was a prelude to the row that may have wounded Ayuso but has ultimately destroyed Casado, who less than two weeks ago accused his PP comrade of allowing her brother to profit from a € 286,000 commission from a face masks contract with her administration.

In his most explosive comment he told a radio interviewer: “Over and above whether it is illegal. . . the question is whether it is comprehensible that on April 1 [2020] when 700 people were dying in Spain [from coronavirus] you can do a deal with your sister and receive € 300,000 in profits for selling masks. ”

Casado withdrew the claim a day later, after Ayuso said her brother received € 56,000 not € 286,000 and that it was not a commission but a payment for masks. Despite Casado’s entreaties she refused to enter into a peace settlement with the PP leader and it became clear that Casado’s position was untenable.

How to deal with Vox will be one of the most pressing issues for his successor. But more important still will be whether the PP, which governed Spain for 15 years, manages to avoid being taken over by a hard-right rival that entered the national parliament less than three years ago.

“Given the potential risk of a demobilized center-right electorate, a weak PP would make it challenging for the right to win the 2023 election,” said Antonio Barroso, deputy director of research at Teneo Intelligence. Regional elections in Andalusia [region] later this year will provide the next important signpost of the party’s strength. ”