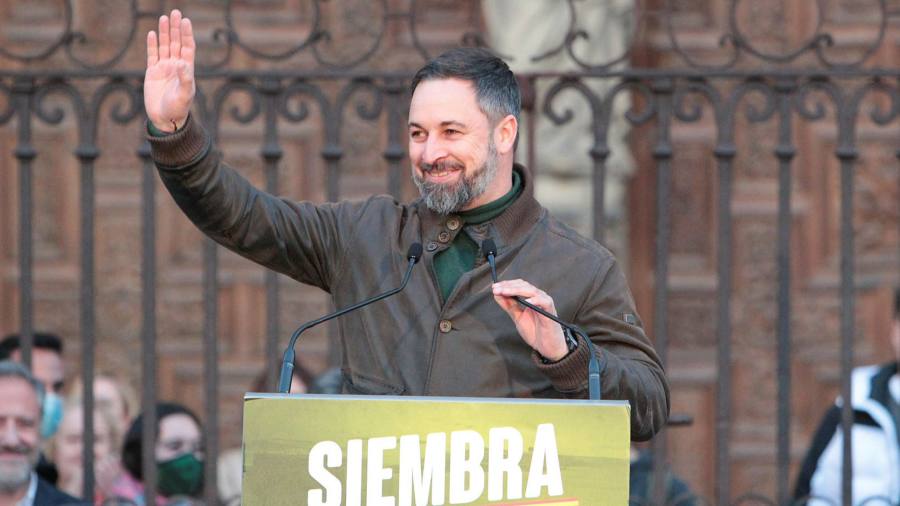 Spain’s hard-right Vox party has marked up big gains in a vote that could serve as a template for general elections next year and the group now plans to enter a regional government for the first time.

The hardline party, which says it wants to “repopulate Spain with Spaniards” instead of immigrants, more than tripled its share of the vote to 18 per cent in polls for the Castile-León region, with over 99 per cent of ballots counted.

The center-right People’s Party, which has ruled Castile-León for 35 years, called the elections a year ahead of schedule in the hope of securing an outright victory, but will instead depend on Vox to form a government.

In a triumphant speech, Vox leader Santiago Abascal made clear his party would demand a place in a PP-led coalition in Castile-León – a move that suggests that any future PP-led national administration may also need to include Vox ministers to attain a majority. Until now, Vox has supported PP-led regional administrations from outside government.

“Vox has the right and duty to [help] form a government in Castile-León, ”Abascal said.

Pablo Casado, the PP’s leader, who has sought to emphasize his distance from Vox, had been desperate to avoid such an outcome. Alfonso Fernández Mañueco, PP leader in Castile-León, said he would start discussions with all the region’s political groupings for support in forming an administration. But, apart from the Socialists, Vox’s 13 deputies are the only grouping big enough to provide the PP with a majority.

“If the PP forms a regional coalition with Vox, it is going to be very difficult for Casado not to include them in a national government,” said Nacho Torreblanca at the European Council on Foreign Relations. But he added that while the PP’s bet on early elections had failed, Vox’s advance helped the right as a whole to outpace the left in the Castile-León election.

With Spain’s next general election due by the end of 2023, the PP had sought to use the Castile-León race to regain political momentum after months of debilitating internal feuds. But although it won 31 seats in the 81-member regional assembly – two more than in the last vote in 2019 – it fell far short of the absolute majority it had hoped to win at the onset of the campaign. The party’s 31 per cent of the vote was unchanged over the two contests.

Castile-León is Spain’s biggest region, occupying an area larger than Belgium and the Netherlands combined, although it is thinly populated with just 2.4mn inhabitants.

Pollsters said the PP had also been badly hit during the campaign when one of the party’s national MPs accidentally backed a key government initiative on labor reform, which only passed thanks to his vote.

Prime Minister Pedro Sánchez’s Socialists, which had come first in the previous Castile-León poll but failed to form a regional coalition, lost seven seats in the assembly, pushed into second place by the PP.

In a confirmation of a trend over the past three years, in which Vox has gained ground at the same time as the country’s liberal party has almost disappeared off the map, the centrist Ciudadanos party, which previously formed a regional coalition with the PP, lost more than two-thirds of its vote and all but one of its 12 deputies.

Ciudadanos said the election had brought about a “very dangerous situation” because of Vox’s plans to enter the regional government. The Socialists said the PP had “opened the door to Vox” and Pablo Iglesias, the former leader of the radical-left Podemos grouping, tweeted: “This is Weimar.”

Various formations that represent sparsely populated local areas markedly increased their support, but did not make enough headway to hold the balance of power in the region’s assembly.