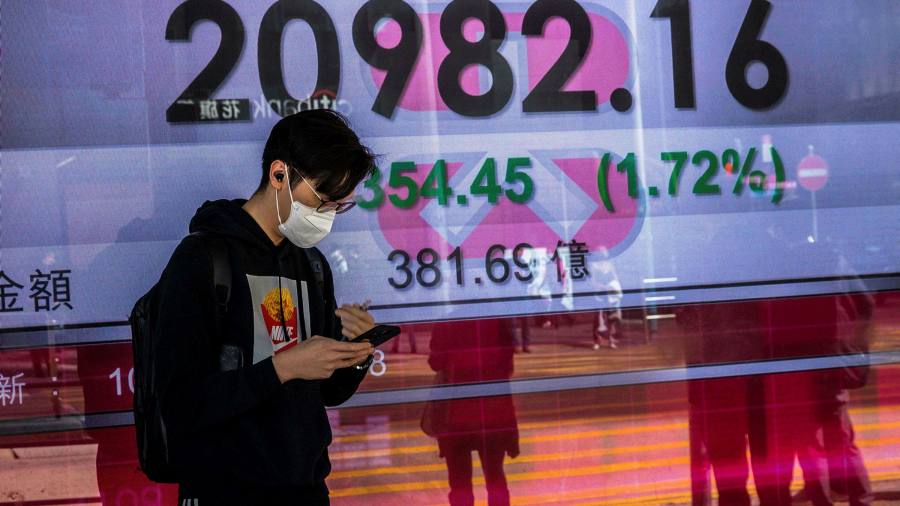 Equities in Asia were largely lower and oil edged up as global investors braced for the impact of tighter monetary policy from central banks, while Goldman Sachs downgraded its forecast for US economic growth over the fallout from Russia’s invasion of Ukraine.

Selling in Hong Kong was amplified by an announcement from the US Securities and Exchange Commission naming five Chinese companies listed in New York that will be delisted if they do not hand over audit documents, triggering a sell-off in US-traded Chinese stocks.

The Hang Seng Tech index fell as much as 8.9 per cent on Friday, after the Nasdaq Golden Dragon China closed down 10 per cent at its lowest level since 2006.

The falls in Asia came after a global sell-off spurred by concerns that surging inflation could drive central banks to tighten monetary conditions even as the war between Russia and Ukraine threatens to derail a global economic recovery.

The European Central Bank surprised market participants on Thursday by announcing it would reduce its bond-buying scheme earlier than initially planned. A surge in the February reading on US consumer inflation to its highest level in 40 years reinforced expectations the US Federal Reserve would raise interest rates.

Clouding the outlook for the global economy, analysts at Goldman Sachs downgraded their US economic growth forecast for 2022 to 1.75 per cent on Thursday evening, from 2 per cent previously.

Jan Hatzius, chief economist at Goldman, said the downgrade was made “to reflect higher oil prices and other drags on growth related to the war in Ukraine”.

“We also expect modest drags on growth from further tightening of financial conditions, lower consumer sentiment and slower growth in Europe, and see additional downside risks if shortages of key metals constrain US production,” he added.

Crude had fallen sharply on Thursday after the UAE announced it would increase daily oil output by 800,000 barrels per day. But analysts warned that the boost to production was unlikely to compensate for expected disruptions from the conflict in eastern Europe.

“The unilateral increase by the UAE without any Saudi participation would not be nearly enough to cover the perceived, or real, market shortage,” said Louise Dickson, senior oil market analyst at Rystad Energy.

China struggles to rein in biggest Covid outbreak since Wuhan