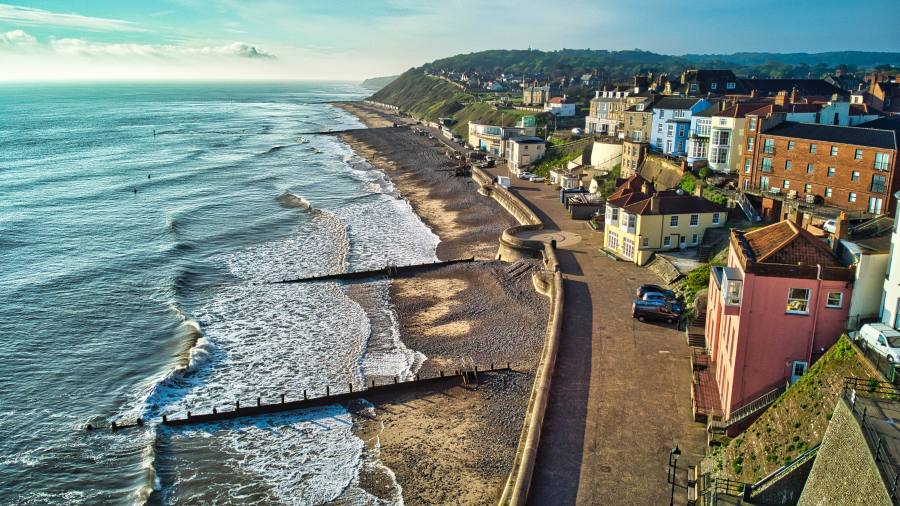 Sitting among reed beds under the big skies of North Norfolk, on the East Anglian coast, the five-storey Cley Windmill is a local landmark. When the Grade II * -listed former flour mill, a guest house for 40 years, came up for sale, Natalie and Varian Bush jumped at the chance of buying it last year.

“Even when it’s raining it’s beautiful here, it’s such a calming place,” says Natalie, who used to work in oil and gas insurance, of the tiny village of Cley next to the Sea. The couple already owned two holiday let cottages in the area. “We saw the opportunity to expand the business – the area was heaving last summer. We have hosted 40 weddings in a year, and plan to reinstate the restaurant that had to close during Covid. ”

Reached by neither motorway nor high-speed train link from London, the northern coast of Norfolk is a largely rural area of ​​unsullied sandy beaches backed by pinewoods, salt marshes and nature reserves. The popularity of certain fashionable villages with high-quality delicatessens and gastropubs – especially Blakeney, Burnham Market and Brancaster – with second-home owners from south-west London led to their “Chelsea on Sea” reputation. Yet the wider area has also been attracting an increasing proportion of empty nesters and change-of-life buyers.

The uptick in demand since the market reopened in May 2020 has led to a shortage of properties, says Ben Marchbank of Bedfords estate agents. “After an incredibly busy summer, the supply of homes for sale began to dry up and force prices upwards during 2021. Three of the four sales agreed this week went to best and final offers, and it’s been this way for 16 months. We’ve never had a period like this. ”

In North Norfolk – the area covered by North Norfolk District Council plus The Burnhams and Brancaster – the average price of a second-hand property increased 17 per cent between 2019 and 2021, to £ 337,450, according to Hamptons using Land Registry data, but the proportion of £ 500k-plus sales nearly doubled during that time to 15 per cent of sales.

In honeypot villages, prices are far higher. In Burnham Market, 2 miles inland, the average sale was £ 802,771 between March 2020 and December 2021, 37 per cent higher than during the previous five years, according to Savills; for the coastal village of Brancaster, the figures were £ 815,896 and 32 per cent.

Seaside villages with sailing clubs – such as Brancaster, Blakeney, Burnham Overy Staithe and Wells-next-the-Sea – command a premium, and you’ll struggle to find one of the highly prized brick and flint cottages for less than £ 400,000. “The villages further east towards Cromer tend to be more affordable as it’s a three-hour drive from London rather than 2.5,” says Marchbank.

Among a number of second-home owners wanting to spend more than just weekends in Norfolk during the pandemic is Lois, a former lawyer from Lewisham in south-east London. She and her husband bought a three-bedroom holiday cottage in the village of Hindringham in 2019 but in July they moved to Norfolk full-time and started their two children at Gresham’s, an independent school, where prep school admissions from south-east England have increased by 20 per cent between [September] 2020 and 2021.

“Struggling to juggle jobs and childcare, we felt something had to change and felt an increasing pull to be in Norfolk,” says Lois, who prefers not to use her full name, and who is setting up a floristry business. “We did not make the decision lightly as my husband still has to work in London for part of the week.”

Their holiday cottage is too small for full-time living so they are renting a larger house nearer the children’s school until they find something to buy – neither an easy task. “There’s hardly anything available to rent long-term and it’s extremely competitive. People who rent houses for life on the large estates in the area – such as Salle, Holkham and Kelling – tend to stay put in them. There are waiting lists, ”she says.

Despite the area’s patchy WiFi, for every family home that comes up to rent in North Norfolk through agency William H Brown there are around 25 people interested, says Rachel Allison, the agency’s area lettings director. “Three years ago, holiday lets were struggling a bit and we saw some owners transfer their properties over to long-term rentals, but not now.”

She says long-term rental rates are the highest they’ve been, with the agency’s traditional three-bedroom homes up 20-22 per cent in two years. “Some local families have been outpriced as local wages in the area are not keeping pace.”

Holiday lettings rates have also been pushed up – by an average of 31 per cent between August 2019 and August 2021, according to AirDNA, which tracks the short-term rentals market. The biggest increases were in Cley (104 per cent) and Blakeney (116 per cent).

The area’s low-key charm and fine links golf courses are an attraction for a growing number of wealthy individuals seeking rentals, says Edmund Parker, who runs a concierge company. These include the Royal West Norfolk at Brancaster, Hunstanton, Sheringham and Royal Cromer. “Some high-profile people want a country house where they are unlikely to bump into anyone they know [like Devon or Cornwall], ”He says. “They do not care it’s not swanky.”

Many weekends drive to the area from Hertfordshire, Bedfordshire or Cambridgeshire. It was a two-hour drive up the A10 or A11 that attracted mortgage broker Roger Phillips and his wife, from Welwyn Garden City in Hertfordshire. As a rental investment then retirement home, they bought The Old Chapel, a conversion in the village of Flitcham, close to the Sandringham and Anmer royal estates, three years ago.

Until their children finish school and they move in themselves, they rent out their three-bedroom property through Sykes Holiday Cottages. The company reports that across its 22,000 listings, bookings were up 24 per cent in summer 2021 compared to summer 2019, reflecting the increase in domestic holidays during the pandemic period when international travel was curtailed.

“It’s very peaceful here, away from the coast, yet prices are going up and, aware of the sensitivity around second-home owners [causing this]we contribute to the local social club and parish council, ”says Phillips.

North Norfolk has the highest proportion of second homes (9.8 per cent) outside of London, according to the ONS. Tim Adams, the leader of North Norfolk District Council, recently said the numbers of second homes in his district are “out of control” and that a system of voluntary contributions from their owners was being considered.

Buyers seeking lower prices have been looking at areas 15-20 minutes inland, whether Burnham Thorpe or Stanhoe, a pretty village with a duck pond surrounded by flint homes, where a three-bedroom detached house sold for £ 446,000 last year. Prices are lower still east of the market town of Holt, where Meadowsweet restaurant recently gained a Michelin star, says Tim Stephens of agent Humberts. “Towards Aylsham it’s very pretty countryside with good villages such as North Walsham and Thorpe Market.” In the latter, the agent is selling a 15-bedroom farm complex with holiday lets on 8 acres for £ 1.5mn.

The average property price paid in Holt and such villages over the past two years dips below £ 400,000, according to Savills using Land Registry data and, in the seaside town of Cromer, famed for its crab, it’s £ 282,515.

Jayne Shillabeer and her husband, who run a Pilates business, bought a cottage in Edgefield, south of Holt, in 2016, after seeing high prices in the coastal hotspots. Yet since the start of the pandemic the couple from Northampton have seen prices “soar” in their village, which is home to the popular pub The Pigs.

“It’s a lovely slower pace of life and most people we meet [through Pilates] are escaping city or suburban life. We’re constantly getting flyers from estate agents telling us they have London buyers who would love our house. One came with a box of chocolates. ”

Marisa Goodby, who made that move from London with her family seven years ago, says the village of Northrepps, near Overstrand beach, is ideally located for Aylsham High School, the Gunton Arms pub – where the art dealer-owner hangs pieces by Damien Hirst and Tracey Emin – and the practical shops of Cromer.

“It’s an outdoor way of life with paddleboarding after school and walks along the beach. Initially I tried commuting every week to London but it was not practical and I missed the family, ”says the former fintech marketer who now works in children’s services.

For Natalie Bush, it’s a (nice) compromise to “commute” an hour to their windmill from their main home near Norwich, from which her husband Varian travels to London by train: “We did not want to disrupt our [three] children’s schooling by moving them up here but am sure we’ll consider it in future. ”

A three-bedroom modern cottage with a paved rear garden and garage in the village of Langham. Blakeney is just over 2 miles away, Holt is 5 miles and Cley Beach is 4.5 miles, or a 15-minute drive. On the market with William H Brown.

A Grade II-listed brick and flint house on Blakeney High Street. The property has five bedrooms, three bathrooms and an open-plan kitchen-dining room leading to a terrace. There is also a brick and flint shed at the bottom of the walled garden. For sale with Strutt & Parker.

A Grade II-listed house with more than 5,000 sq ft of living space including six bedrooms, all en suite. The recently restored property is on nearly 2 acres, including walled gardens, and the beach is less than a mile away. Available through Fine & Country.