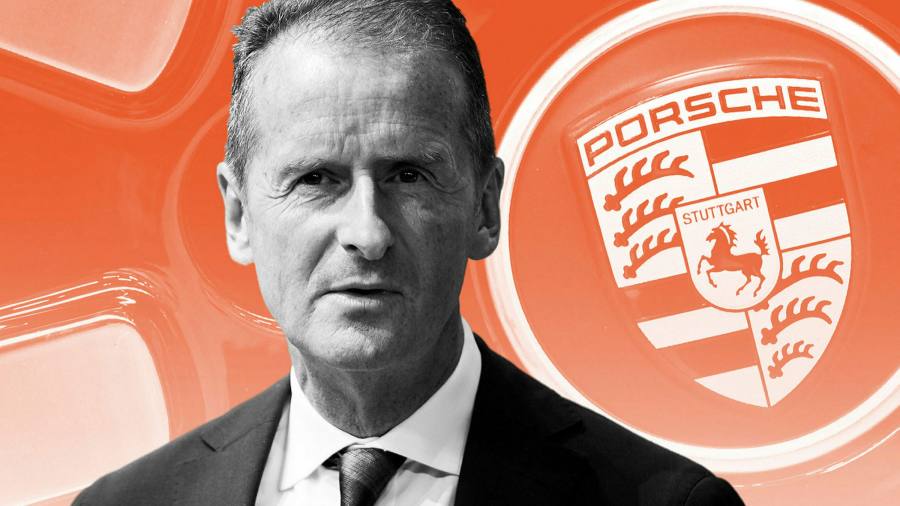 Like many of Volkswagen’s pivotal announcements, the German group’s management board had no control over the timing of a confirmation that it finally planned to list part of the company’s crown jewel, Porsche.

Instead, the drip-feed of rumors from VW’s many stakeholders – which include a secretive family shareholder, powerful unions, the German state of Lower Saxony and 12 independently managed motor brands – forced the carmaker to rush out a statement in compliance with stock market disclosure rules, just as Russia moved forces into Ukraine.

Neither a botched bulletin, however, nor the prospect of war could dampen the case for liberating Porsche, which delivers just 300,000 vehicles out of the 9mn ​​sold by VW Group each year, yet accounts for a quarter of its profits. VW shares initially rose almost 10 per cent on the news as markets relished a € 20bn initial public offering of the historic brand, which would easily eclipse 2021’s $ 12bn float of electric carmaker Rivian.

As Herbert Diess, VW chief executive, made a point of emphasizing last year: “Porsche performs in a league of its own.”

The luxury carmaker, whose origins intertwine with VW’s own, shows “how an automotive icon can remain an outstanding sports and performance brand while repositioning towards electrification”, he added.

In contrast to VW, which has flooded the market with underperforming electric cars, Porsche has focused on excellence.

Following the mantra of its former boss Ferry Porsche, who told his engineers the company “can and may build anything, as long as the product is better than competitors”, the brand most famous for the purr of its engines managed to sell more silent electric Taycan models last year than its storied 911s, delivering 41,000 of the cars to customers, much to the surprise of Porsche’s own executives.

An electric Macan sport-utility vehicle is due to follow but not until the second half of 2023, with Oliver Blume, Porsche chief executive, keen to preserve cash-generating petrol models, vowing last year that, unlike VW, “Porsche will always offer combustion engines ”.

As a result, Porsche is virtually alone among legacy car manufacturers in maintaining profit margins above 15 per cent, and increasing revenues by double-digit figures while speeding into the electric age.

Yet investors have not rewarded VW for its ownership of Porsche. While the brand has been estimated by analysts to be worth between € 100bn and € 200bn, Diess, who has made it his mission to take on Tesla in the electric race by committing € 52bn to develop battery-powered models, has seen his company’s market value lag well below the € 200bn he has long hoped to achieve, never mind the $ 830bn valuation of its US rival.

The Porsche-Piëch family, meanwhile, which indirectly owns more than 50 per cent of VW’s voting shares through the confusingly named Porsche SE holding company, is motivated by “wanting to own an asset like Ferrari, LVMH and Hermes”, according to a person close to the Austrian clan.

The family is still nursing its bruises after being forced to relinquish ownership of Porsche following the failure of its audacious bid to swallow VW in 2009. The aborted attempt, a casualty of the global financial crisis, led to a complex reverse takeover in which Porsche became part of VW, although it continued to be managed by allies of the eponymous family.

Yet the leaked details of the planned IPO, which still needs to be approved by VW’s boards, is already leading to concerns that the Wolfsburg-based company will bungle the listing, in a manner not too dissimilar to the partial float of its Traton trucks arm in 2019, in which it maintained a close to 90 per cent stake, and which languishes below its listing price.

“VW does not have a flawless record when it comes to mergers and acquisitions, to say the least,” said Daniel Schwarz, Stifel’s motor industry analyst, who added that investors might worry that the company, which already mints € 15bn in free cash flow a year, could whittle away the proceeds on expensive projects to placate unions and secure employment.

A prolonged clash with workers late last year led to VW pledging to build another factory close to its Wolfsburg headquarters, where it had already promised to base a research arm designed to take on Tesla.

A person close to VW’s unions, which in effect control the company’s supervisory board due to a loose alliance with the state of Lower Saxony, confirmed that the carmaker’s workers’ council would look to safeguard jobs and the future of German plants before approving any Porsche listing .

Additionally, leaked details from the draft agreement for the planned IPO point to the creation of a much-criticized ownership and governance structure that is not unlike the one that has kept many investors from buying into VW itself.

Porsche’s stock would be split equally into ordinary shares and non-voting preference shares, after which 25 per cent, half ordinary and half preference, would be floated at an expected valuation of between € 80bn and € 90bn for the business as a whole.

This would result in one of the largest IPOs in recent German history. But the Porsche-Piëch family’s investment vehicle could buy all of the ordinary shares on offer, according to people familiar with the matter, leaving just 12.5 per cent of Porsche in free float and threatening to create a stock in which no large investor could build a substantial stake.

People close to VW’s management also warned that there was still a chance that the IPO would be scrapped, either due to internal wrangling or an unfavorable market environment. Significantly, no lender has been officially appointed to lead the transaction, according to a bank involved.

But as one VW watcher quipped, the current plans look eerily similar to the Porsche of old, which was essentially a closed shop to external investors. The brand, they added, was “in danger of going back to the future”.