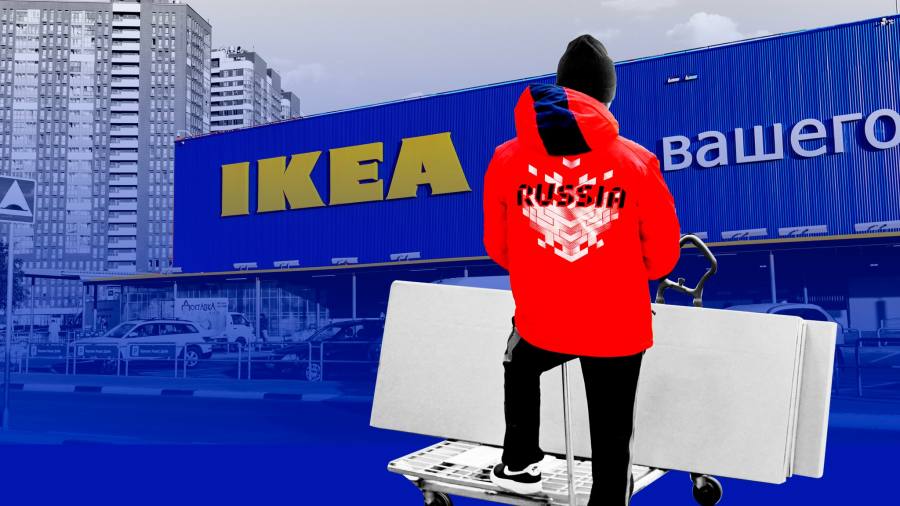 Svetlana Shapovaliants vividly remembers visiting the first Ikea store in Russia, shortly after it opened in 2000.

At the time, she and her husband were in their twenties and living in a “terrible” apartment on Ryazanskiy Prospekt in Moscow. She spent Rbs4,000 – “something like a third of my salary” – on a bunch of items including “some awful blue plates” that she still has.

Later, when the couple were able to buy their own house, they filled it completely with Ikea furniture in what she describes as a “Moscow-Paris-New York design”.

“People would come round and say ‘wow!'” She recalls.

Now a 47-year-old therapist and business coach still living in Moscow, she returned to Ikea last week. This time it was to say goodbye.

When the Swedish company announced that it was shutting down its stores in Russia in response to the invasion of Ukraine, she and her husband jumped in their car. On arrival, they found an Ikea employee with a loudspeaker telling a large crowd that the store was already closed. A young couple walked past carrying some plants.

“We were laughing so as not to descend into depression,” she says. “We understood that we were witnessing an epoch-defining event. And we have no idea what it will be like, going forward. ”

Just as the 30,000 people who queued outside the first McDonald’s in Pushkin Square in 1990 symbolized the start of something new in Russia at the end of the cold war, she says, the huge crowds that made one final trip to Ikea’s stores last week “mark the end of an era ”.

For the past three decades, multinational companies have played an outsized role in Russian society, bringing a slice of the good life to a middle class that had grown up with the drabness of the Soviet era.

Yet over the past two weeks, since President Vladimir Putin launched an invasion of Ukraine, there has been a dramatic exodus of those same foreign companies as 30 years of economic and business links between Russia and the west are being severed. According to Yale School of Management, more than 300 companies have announced their withdrawal from Russia in protest – even if some, such as Ikea, have for now only suspended operations.

Access to foreign consumer goods – and the lifestyles that they embody – has been an important part of the political compact between the government and middle-class Russians since the end of the cold war.

The question is whether the departure of the western companies will fuel opposition to the Putin regime and the war, or simply deepen nationalist anger at the west.

For the western governments looking for non-military means to counter Russia, they hope the psychological impact of the closures will increase the pressure that is building on Putin. While the Russian president sometimes talks about Ukraine in terms of restoring lands that were controlled from Moscow during the Soviet era, the west’s response has been to try and recreate the economic and cultural isolation of the cold war years.

Sergei Guriev, a Russian economist now at Sciences Po Paris, says it is not just the middle class that will suffer: the poor will be hurt even more, from rising food prices and sharply higher costs for imported medicines.

The events of the past fortnight can make it feel as if “modernity is exiting,” he says. “On my last trip to Moscow, I thought how nice and sophisticated everything was”, he adds. Some of that is now being “destroyed.”

Almost every Russian of a certain age remembers their first contact with the new foreign brands that started appearing in the late 1980s. Before McDonald’s opened, there were few restaurants and many cafes were dark and dingy. Russians did not just queue up for the Big Macs – they were enthralled by the brightness, efficiency and wide choice on the menu.

Ikea has been a central player in that cultural transformation. For more than two decades, the Swedish chain has been a huge success in Russia not just because of its easy-to-assemble flat-pack furniture, but because it offered an accessible entry into a new way of living for the middle class.

As well as opening 17 stores around the country, including in Siberia, the company is also one of the biggest operators of the shopping malls that have sprung up in the suburbs of Russia’s main cities. Driving along new, wide highways in their foreign brand cars, middle-class Russians flocked to its 14 Mega malls, all of which have an Ikea as the anchor tenant. (While the Ikea stores have closed, the malls will remain open.)

In the 2000s, Russians started to use the phrase evroremont, or “Euro-renovation”, to describe the rite of passage around revamping a Soviet-era apartment, often by installing a new bathroom and kitchen from Ikea. On real estate websites, Russians will sometimes advertise a rental property as an “Ikea apartment” – code for clean and modern.

“Ikea first and foremost is a way of life. . . When it appeared here, this was tied up with the idea that Russia could have a middle class, ”says sociologist Alexander Filippov, who adds that half the furniture in his home is from the store.

Purchasing consumer goods and appliances in stores such as Ikea was an important change for people who had been used to flea markets, where the origins of goods were often unknown.

“Now, you had this door open to a totally new world,” he says. “Suddenly, everything was available. In the same store you could buy an affordable bookshelf, a rug, a mattress. ”

The boom in stores such as Ikea in the 2000s had a much wider political resonance. In his first two terms as president, from 2000 to 2008, Putin offered Russians an implicit bargain. There would be less of the freewheeling democracy of the Yeltsin years in the 1990s, as the political system became more tightly controlled by the new leader. But in return, he offered a sharp rise in living standards, including the ability to pursue a western form of consumerism.

Ikea’s iconic status among part of the middle class was boosted when it launched a public campaign against corruption in Russian life. In 2009, it announced that it was halting new investment in the country because of the pervasive bribes that it was asked to pay.

The company began to buy its own generators so that officials would not be able to threaten power cuts if bribes went unpaid. A year later the company sacked two senior executives – one of whom was close to founder Ingvar Kamprad – who had allegedly turned a blind eye to bribes being paid to secure power for a store in St Petersburg.

“I really respect Ikea’s story,” says Shapovaliants. “How Ingvar kicked out his best friend. . . in a corruption case. That’s a famous tale. ”

However, over the past decade Putin’s legitimacy has remained much less on rising living standards, as the economy has stagnated, and much more on nationalism and standing up to the west. In the process, the political and cultural importance of western consumer goods has diminished. The annexation of Crimea in 2014, which led to a round of sanctions on Russia’s economy, was popular with many Russians.

Not only has some of the novelty value worn off, but there are plenty of Russian brands that can now compete with multinationals, offering similar products or experiences.

With 847 restaurants, McDonald’s was the leading fast-food chain before it announced its own suspension of operations, but it faces homegrown challengers such as Dodo Pizza, and Teremok, an ultra-cheap chain offering Russian-style pancakes. Several Chinese fast-food brands have become popular in recent years. Ikea also now has domestic rivals such as Hoff.

The initial response of the regime has been to try and mobilize a nationalist backlash against the foreign brands. On Thursday, Putin said Russia would find “legal solutions” to seize assets based in the country from international companies that have decided to close their operations.

“Is there a reason why all these Pizza Huts and Ikeas and so on are not nationalized already?” Russia Today editor Margarita Simonyan wrote on Telegram on Tuesday. “Their shops, warehouses and quick-service cafés are on our land, our people work there – so what’s the problem?”

Speaking on Thursday, Moscow’s mayor Sergei Sobyanin said the government would provide Rbs500mn ($ 4mn) for preferential credits of Russian fast-food chains to help “fill the niche which is being vacated by foreign chains”. McDonald’s network could be replaced by domestic businesses within the space of six months to a year, he said, “especially since the foodstuffs themselves are supplied by Russian suppliers”.

Filippov, the sociologist, says the closures could rally people behind the government. “I do not think it will provoke some serious negativity towards the government,” he says. “We do not know right now how much harder life is going to get, but I suspect that the harder it does get, the more basic there will be for people to identify with each other. . . “We’re all in one boat.”

But he warns about the prospect of mass job losses. “The situation could become very highly strung. . . ”Within society, he says.

Ultimately, the risk for Putin is less about the departure of western brands and more about a massive economic contraction that wipes out a generation of advances in living standards. The Institute of International Finance is predicting a 15 per cent slump in the Russian economy this year, taking real gross domestic product back to the levels of the early 2000s, just after Ikea first opened in the country.

Shapovaliants says she fears for the future of her counseling and training business, which she began eight years ago. “It had just started breathing, growing, and we thought, wow, it’s really going! And now I understand that I most likely have to say goodbye to that. ”

As well as worrying about a return to social instability and crime not seen since the financial crisis in the 1990s, she believes that an important part of urban life will not be the same. “Some brands will be easy to replace, but with Ikea, I’m afraid that will not be possible,” she says. “It’s too cool, too ecological and ethical.”