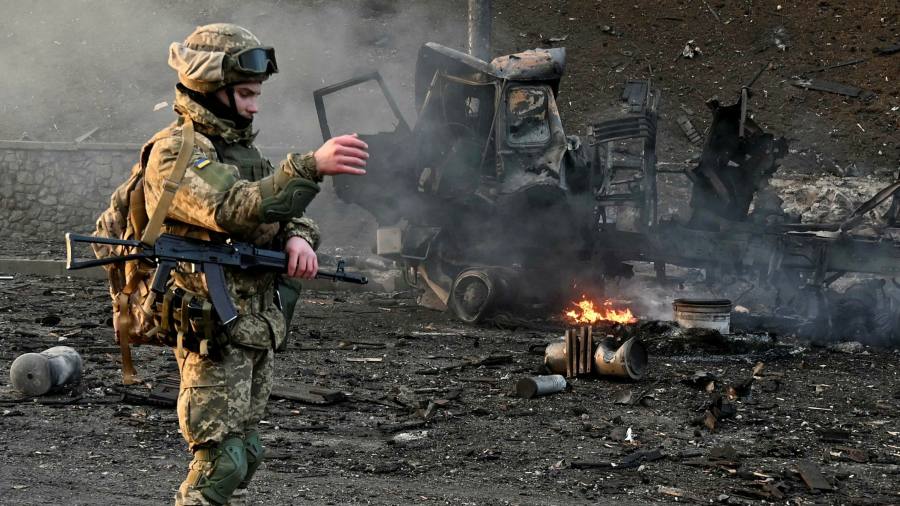 Until a few days ago, the EU debate on “strategic autonomy” pitted states calling for self-sufficiency in vital products against those preaching “interdependence”.

Vladimir Putin’s war of aggression in Ukraine shows both sides were focused on the wrong adversary and the wrong sectors. The acute geostrategic challenge is not, it turns out, dependence on China for semiconductors or face masks but Russia’s ability to shrink the supply of oil, gas and raw materials to western users.

The task is also more existential than they imagined: not retaining economic or technological leadership but countering a land war in Europe of the kind the EU was founded to make impossible. Really being an actor in your neighborhood, let alone on the global stage, at times requires a much more direct approach.

The good news is that, as often before, a crisis has united and focused EU leaders’ minds. With western partners, they have agreed unprecedented sanctions at record speed: targeting Putin personally, ejecting select Russian banks from the Swift cross-border banking network, and restricting some of Russia’s central bank reserves. But the EU remains too tempted by fine-tuned calibration. That is a good ideal for normal legislation and regulation, and a very bad one for a power contest.

It was a mistake to hew to a gradualist approach before Putin’s invasion and think it could be deterred by ominously promising severe consequences always left up one’s sleeve. This reduced the EU to a reactive role, which Putin – a KGB man to the core – could manipulate through his mastery of confusion, ambiguity and contradiction.

It also meant EU actions were priced in. Deterrence would have required “overreacting” to Putin’s escalating threats since last year, not reacting proportionately. Only hitting back much harder than expected would have met him at his own game and had any chance of frustrating his calculations.

The time for deterrence is over; the fight must now be taken to the aggressor. Europe will not do so militarily (though it must keep sending arms to Ukraine). Instead, this again implies the financial equivalent of “shock and awe”. The EU, with the broader west, has the capacity. The question is whether it has the will to wield it fully.

The debate on cutting Russia out of Swift is illustrative inasmuch as it is a bit of red herring. Swift is a messaging system; it is harder for banks to transact without it but not impossible. Conversely, other measures can also block transactions thereby making Swift less relevant. But loopholes – such as EU and US concern about being able to pay for Russian fossil fuels – make partial sanctions only somewhat better than none.

They could do much more: freeze all assets of every person and entity connected to the Russian state, including all Russian foreign reserves they can reach; publicize the nature and ownership of such assets; and criminalize all transactions with Russia-linked financial institutions and intermediaries that enable them. This means the US, the UK, and EU tax havens must stop their repugnant laundering of money and reputation for Putin’s gangster class. Is the west willing to maximally isolate the Russian economy, not just “selectively”?

Make that choice, and ending Swift access fully follows as one technicality among many others. Simply put, the west can tell everyone to pick economic connections with Russia or with itself, just as the US told the world to choose between its financial system or Iran’s.

This would engineer a Russian economic collapse, capital flight and bank runs at least on foreign currency deposits. Putin has built a war chest of reserves, but probably more than half could be seized. Moscow would surely stop oil and gas shipments, forcing the question: which of Russia and the EU is more dependent on the other?

The answer lies in the politics of energy prices, which Putin no doubt thinks have shifted in his favor. But EU leaders can prepare their people for even higher prices as an unavoidable sacrifice for freedom in Europe, while helping vulnerable states and households. The potential reservoir of support for this stance is a strength Putin’s autocracy does not enjoy.

This would be a big step up from anything the EU has yet done. It would mean a de facto policy of regime change. But Ukrainians today face a replay of Europe’s 20th-century nightmares. So if not now, when? Everything we know about Putin should make us expect that his assault will turn more savage. The EU has the ability to demonstrate that overwhelming power can also take a civilized form.

Earnings playbook: A big week of retail reports lies ahead. Here's what investors need to know