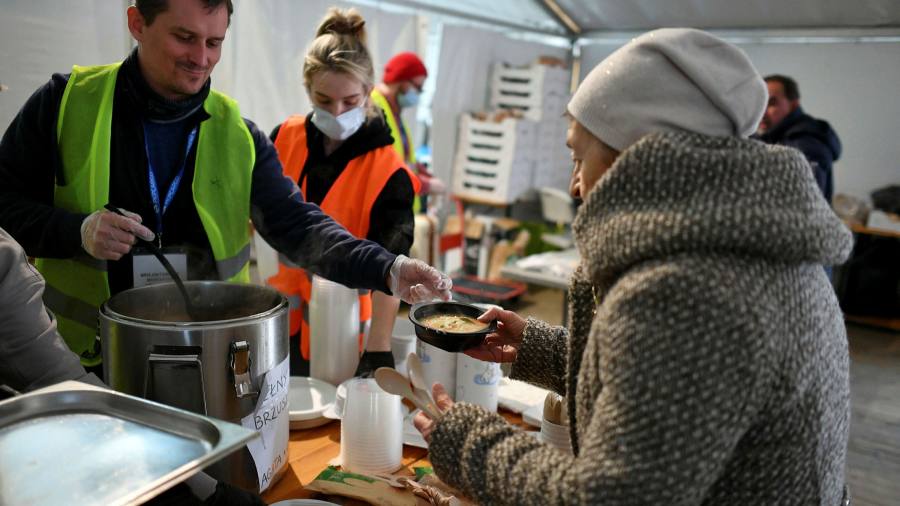 Beata Borucka’s social media channels offer Polish grandmothers tips on everything from using Facebook to staying in shape. But last week, she gave her more than 300,000 followers something different: information on how to become a “temporary grandmother” to Ukrainian children forced to flee to Poland after Russia invaded their country.

The self-styled “most famous grandmother on the internet” teamed up with the creators of an app that paired elderly people stuck at home during the pandemic with others prepared to help with tasks like shopping. In a matter of days, the app was re-engineered to match Polish grandmothers with Ukrainian refugees needing extra help with their children. A week after the launch, almost 1,000 have signed up.

“Polish grandmothers are not very rich. But what we have is heart. And we have time, because generally we are retired, ”said Borucka. “Now the main challenge is to reach Ukrainian mothers and tell them we are ready to help.”

Borucka’s initiative is part of a huge civic mobilization taking place across Poland as the country struggles to provide help and housing to the huge flood of refugees sweeping in from its eastern neighbor.

In the two weeks since the Russian invasion, 2.6mn people have fled Ukraine, in what the UN has described as Europe’s fastest-growing refugee crisis since the second world war. More than 1.62mn have crossed into Poland. With the war showing no sign of abating, neither the refugees, nor those helping them, know how long they are likely to stay.

Despite the uncertainty, the surge has triggered an outpouring of generosity from Poles. Many have donated clothes and food or driven to the border to help transport refugees to cities, or onwards to other EU countries, and tens of thousands have opened their homes to provide accommodation.

But as the crisis escalates, there are growing signs of strain. Aid organizations say the response has relied heavily on the kindness of strangers in the absence of centralized organization. Warsaw’s mayor said yesterday that refugees had already increased the city’s population by 15 per cent. Officials in Krakow, Poland’s second city, warned that it was “slowly losing the capacity to take in more waves of refugees”.

“Basing the system on the goodwill of private citizens will not be enough,” said Agnieszka Kosowicz, head of the Polish Migration Forum. “More co-ordination is necessary immediately, because we are in a situation in which 100,000 people are arriving every day.”

Zofia Jaworowska is among those at the heart of the civil society response. Her non-governmental organization, Grupa Zasoby, matches refugees at Warsaw’s Western Station with Poles offering somewhere to stay. So far, she said, the organization had had 4,500 offers of accommodation amounting to between 15,000 and 20,000 beds, and had already housed 3,500 refugees.

“We could do even more, but we feel it’s better to help fewer people in a way that is completely safe, because we feel responsible,” she said.

Lucja Skolankiewicz is emblematic of how spontaneous the response has been. The student from Warsaw moved out of her flat so three refugees could move in. But before they arrived, she was asked to go to the border to work as a translator and had to leave the keys for the Ukrainians to find in her letterbox. “I keep in touch with them, so I really hope we will meet,” she said. “But I have no idea when.”

Businesses have also joined the effort. Exhibition halls have been turned into reception centers. Some companies have donated goods. Others have donated cash. The Smyk toy chain has given staff time off work to volunteer. Wladyslaw Grochowski, founder of the Arche hotel group, offered to put up 5,000 people for free in his hotels and earmarked 5ml zlotys ($ 1.1mn) for the plan. Last week, a Zabka grocery store in Przemysl, a town some 15km from the border, was offering free food and drink to refugees who came to the shop. “We’ve had so many,” said a cashier.

Poland’s conservative-nationalist government vehemently opposed EU quotas for asylum seekers during the 2015 migration crisis. But faced with an attack by one of Poland’s historic foes on a neighboring country with which Poles share close linguistic and cultural ties, public opinion has been strongly in favor of support.

Ukrainian flags flutter on cars in the Polish capital, while some vehicles display messages of support, ranging from “Glory to Ukraine” to “Fuck Putin”. A recent poll for the Rzeczpospolita newspaper found almost 60 per cent of respondents backed taking in everyone fleeing Ukraine.

Experience with the large Ukrainian diaspora already in the country – more than 1mn lived in Poland before the current influx – has also reassured many Poles that the refugees will integrate into Polish society.

Jaworowska cites the example of Ukrainians who had worked as carers for her own grandparents: “They were all amazing women, and there were so few communication issues and barriers.”

But despite Poles’ desire to help, there are signs that the sheer number of refugees and the speed of their arrival is outstripping Poland’s capacity to receive them. Two weeks into the crisis, many volunteers are on the brink of exhaustion. And cities that have borne the brunt of the influx are running short of space.

In Krakow, Fundacja Brata Alberta, an aid group, said on Friday that the situation in the city was “tragic”, adding: “We are ringing lots of places, but the answer is the same: there are no more free beds.”

The strains are also evident in Warsaw. At the central station, many have been sleeping on the floor next to piles of donated blankets and children’s toys as they wait to travel on or find accommodation.

“There are so many people who do not know what to do, where to go, where they are coming from, who do not know the language,” said Olga, a Ukrainian volunteer, as she took a brief cigarette break amid the crowds swirling around the station.

“They are cold and hungry. There are lots of children, and they are upset and their mums are upset. . . The Poles are very kind, they are supporting us, but there is just not enough space for people. ”

Joanna Niewczas, a co-ordinator at Torwar, a cavernous arena in central Warsaw being used as temporary accommodation for around 500 refugees, warned that volunteers there were receiving inadequate support from the state and were at the limits of their “physical and mental endurance” .

Volunteers were buying medicines for refugees from their own pockets and calling local restaurants to ask them to donate food, she said. Refugees were having to clean the toilets, and despite cases of Covid, there was a lack of face masks and other hygiene products.

To help refugees, the government has put forward a law that will allow Ukrainians to stay in Poland for 18 months and access the education and healthcare systems. The bill also provides for payments of 40 zlotys per day for up to two months to individuals and entities providing accommodation, as well as a one-off payment of 300 zlotys to refugees.

But others say a far more systematic approach is needed, and local officials have begun to appeal for international support. Kosowicz said this would be especially important in caring for refugees with disabilities or serious illnesses.

“The Polish health system and support system for people with disabilities is very weak, and we do not have the human resources to look after children who have serious health problems,” she warned.

With refugees still arriving in Poland in vast numbers and no end to the war in sight, Borucka is also worried about the country’s ability to cope. But Poles had a duty to help their neighbors in their hour of need, she said.

“Before Putin’s aggression against Ukraine, so many Polish families used to have the help of Ukrainians at home,” she said. “My family has had a very strong connection with a Ukrainian family for 30 years. Now we [must] give them something back. ”