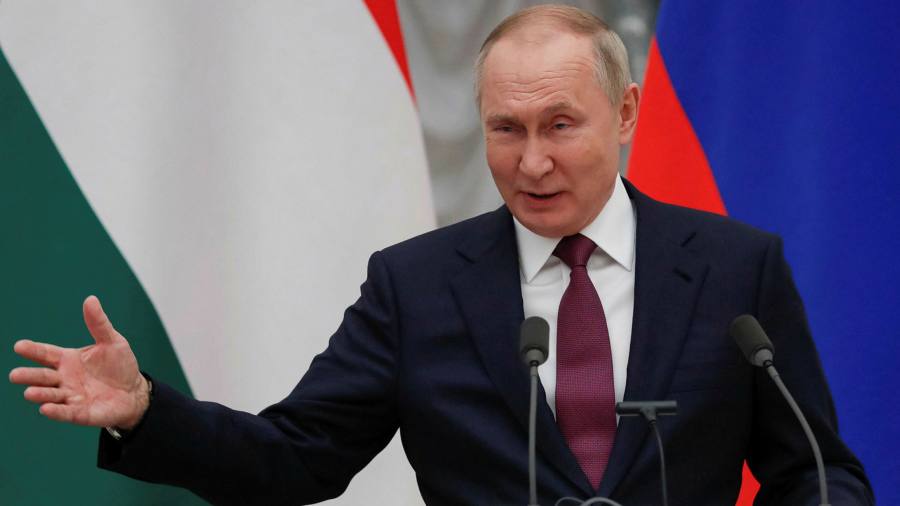 Unwilling to risk a military clash with a nuclear-armed Russia, the west is relying largely on the threat of punitive sanctions to deter Moscow from invading Ukraine. The good news is the US is developing a hard-hitting package and persuading some recalcitrant EU allies to sign up. Less good news is that these are unlikely to be enough, in themselves, to persuade President Vladimir Putin to desist – and the west must brace for pain from both its own measures and Russian retaliation.

If Russia invades, the US and European allies are preparing potentially to bar its lenders from converting rubles into dollars, and restrict secondary trading of newly issued Russian debt. While agreement to bar Russia from Swift, the interbank payments system, seems elusive, other planned steps could do significant damage to its banks and financial system. Washington is also touting blocking exports of some sensitive technologies containing US components to Russia, hitting its arms and aviation industries and even some consumer products. Access to western technology and capital could be barred for new Russian energy projects. The Nord Stream 2 gas pipeline to Germany seems increasingly likely to be halted.

Washington is threatening, too, to sanction tycoons and officials close to Putin, going after their mansions and bank accounts in the west. It has prodded the UK, whose support is vital given London’s role as a hub for Russian money, to prepare similar steps.

Russia has, however, sanction-proofed itself rather well since the west took measures over its 2014 aggression against Ukraine. The Kremlin pressed oligarchs to bring money home in 2015, and banned senior officials from holding overseas assets. Moscow has amassed gold and foreign exchange reserves topping $ 620bn; only one-sixth are now in dollars. Surplus oil and gas revenues have been hoarded in a $ 190bn National Wealth Fund. Government debt is just 20 per cent of GDP.

Moscow also has non-military ways to hit back, and has strengthened the leverage it exerts through Europe’s reliance on Russia for 40 per cent of its natural gas. By holding back from selling extra spot gas in the recent supply squeeze, Russia has helped push European gas storage down to less than 40 per cent of capacity, the lowest ever at this time of year. Liquefied natural gas from suppliers such as Qatar would be insufficient to make up for even partial supply restrictions by Russia. Moscow could also retaliate to western steps by seizing foreign assets in Russia, or restricting repatriation of profits.

Yet while the Kremlin may feel confident of withstanding a short-term shock, western measures would cause even more damage to Russia’s economy over the longer run. Coming on top of the cost of both sanctions and sanction-proofing since 2014, which has led to stagnant growth and living standards, the political blowback for Russia’s president could, over time, be severe.

The sanctions threat remains, then, a vital part of a strategy that includes diplomatic talks, and efforts to increase the military cost to Russia of any Ukraine invasion. Western countries should step up supplies of defensive weapons to Kyiv.

Moscow’s military muscle-flexing also highlights the need to take long-overdue steps. The UK, in particular, should strengthen controls on illicit Russian money, not just as part of any Ukraine-related sanctions but to prevent efforts to subvert its democracy. And Europe must turn talk of making itself less dependent on Russian energy into a reality. Today’s crisis may yet be defused. But western leaders can no longer be in any doubt about the nature of the Kremlin they are dealing with.