The ‘London laundromat’: will Britain wean itself off Russian money? 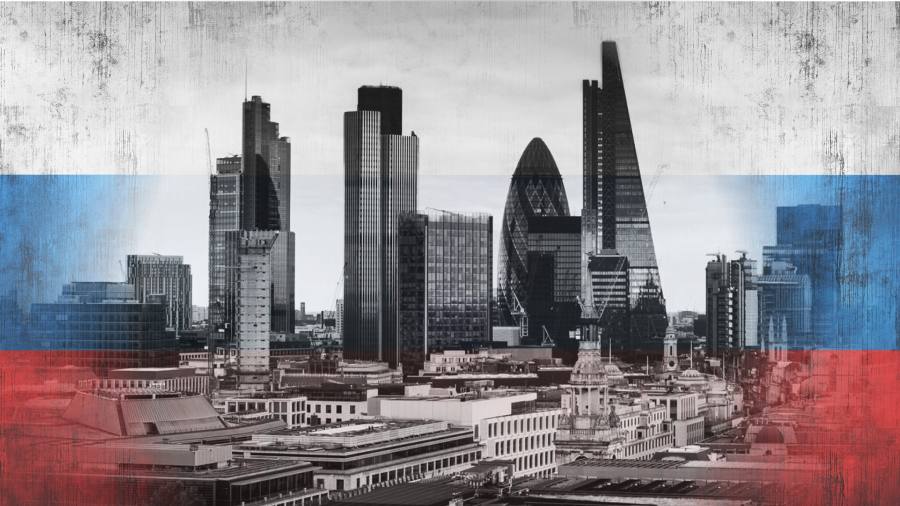 5 Belgrave Square, a stucco-fronted mansion complete with pillared portico, is one of London’s most exclusive addresses, overlooking leafy gardens and nestled between grand embassies and other private residences.

Once home to Sir Henry “Chips” Channon, a US-born Conservative MP whose diaries published during the 1960s were a source of scandal about British high society, in 2003 the Belgravia property, marketed for £ 25mn, became a symbol of a new era in UK prime real estate ownership.

It was bought for members of the family of Oleg Deripaska, the Russian oligarch, an early sign of a flood of Russian wealth into “Londongrad”, as the UK capital soon became labeled.

Another prominent oligarch who invested in London the same year was Roman Abramovich, who bought Chelsea football club. This week, as pressure ratcheted up on Russian tycoons following Vladimir Putin’s invasion of Ukraine, Abramovich put Chelsea up for sale.

Over the past two decades, London became one of the preferred investment locations – if not the favored destination – for Russian oligarchs, as well as a key financial center for Russian companies, all encouraged by British governments of different political stripes.

But critics have dubbed it the “London laundromat”: an apparatus that allowed billions of pounds – some of it obtained through illegal or questionable means – to be siphoned out of the Russian economy and into trophy assets in the UK.

Following Putin’s full-blown war on Ukraine, Boris Johnson declared he wants to put that process into reverse, and impose punitive sanctions on individuals and companies with links to the Kremlin as well as crack down on money laundering.

But despite the bold rhetoric, it is not clear the Johnson government has either the political will or the tools to completely strip illicit money from the UK financial system.

The first wave of Russians to invest in UK real estate “was new money wanting very substantial properties”, according to Andrew Langton, chair of London estate agent Aylesford International. “The properties on the wish list were the biggest and the best,” he says.

The lack of UK rules requiring full disclosure of foreign owners of British property was an attraction for the Russian super-rich, who appreciated the privacy.

“There were no questions asked,” says Charles McDowell, an estate agent who specializes in buying high-end London properties for clients. “If you came along with a photocopy of your passport, that was enough.”

A 2006 judgment in the High Court in London involving Deripaska said he was the beneficial owner of 5 Belgrave Square.

But the title register for the property lists the proprietor as Ravellot Limited, a company registered in the British Virgin Islands. Deripaska’s name does not appear on the title, although a spokesperson for him said members of his family own the house. She added Deripaska was not the beneficial owner.

Deripaska, founder of metals and hydropower company EN +, has been under US sanctions since 2018 as a result of his alleged close relationship with the Kremlin.

The spokesperson for Deripaska – who in 2019 described the US sanctions as being based on “filthy lies” – said his assets were acquired “legitimately and legally”. “Allegations to the contrary are utterly baseless,” she added.

Deripaska’s spokesperson said prior to stepping down from his management position at EN +, he met many senior officials from the Kremlin and relevant Russian government departments. “He had ordinary links, just like any other industrialist of his scale would have in any country around the world,” she added.

Transparency International, the anti-corruption campaign group, has identified £ 1.5bn worth of UK property – nearly 150 land titles – bought by Russians who have been accused of links to the Kremlin or corruption.

More than £ 1bn of those assets are held by companies based in tax havens, the majority in UK crown dependencies and overseas territories, which makes ownership difficult to identify.

In the heady days after the end of the cold war, when Moscow was introducing democracy and aggressively privatizing much of its economy, London quickly signaled that it was open to Russian business.

A visa policy first introduced under the then Conservative prime minister John Major in 1994 and expanded under Gordon Brown’s Labor government effectively sold British residency to overseas millionaires with little in the way of checks over where their money had been made.

“There was a ‘blind faith period’, where if you rocked up with the money then you pretty much got given a visa,” says Tom Keatinge, an expert in finance and security at the Royal United Services Institute, a think-tank.

“The ease with which the Russian government was able to raise funds in London. . . raises serious questions about the government’s commitment to combating Russian state aggression, ”the House of Commons foreign affairs select committee said in a 2018 report.

The committee pointed to the 2017 flotation in London of EN +, then controlled by Deripaska, as an example of the “contradictions inherent in UK government policy towards Russia” given the company’s connections to sanctioned entities. It added Deripaska’s “proximity to the Kremlin was well known”.

Russia’s super-rich have tried to cultivate influential friends in the UK. Lord Peter Mandelson, a former senior minister in Tony Blair’s government who went on to be European trade commissioner, spent three nights on Deripaska’s luxury yacht off Corfu in 2008. He denied doing any favors for the tycoon but critics said his stay highlighted how close some British politicians were to the Russian elite.

A 2020 report by the UK parliament’s intelligence and security committee noted that a number of British politicians had business interests linked to Russia, or worked directly for major companies with ties to the Russian state. Former Tory minister Lord Greg Barker, for example, joined EN + as chair when it floated in London.

The report also highlighted a supporting cast of advisers, including bankers, lawyers and estate agents, who were on hand to provide their services to oligarchs and Russian companies.

It said that Russian money had been put to use in “extending patronage and building influence across a wide sphere of the British establishment – public relations firms, charities, political interests, academia and cultural institutions were all willing beneficiaries of Russian money”.

The report found that certain members of the Russian elite who were closely linked to Putin had donated to UK political parties and had “a public profile which positions them to assist Russian influence operations”.

Labor estimates that since Johnson became prime minister £ 1.9mn has been given to the Conservative party, or individual Tory MPs’ constituency associations, by donors who have either “made money from Russia or have alleged links to the Putin regime”. The opposition party is calling for the money to be returned.

Foreign Secretary Liz Truss said last month that all Tory donors had been fully vetted. “I think it’s very important we do not conflict people with Russian heritage and Russian backgrounds with people who are close to the Putin regime,” she added.

Governments led by former prime ministers David Cameron and Theresa May came under intense pressure to crackdown on London after Putin annexed Crimea in 2014, and following the poisoning of former Russian double agent Sergei Skripal in Salisbury in 2018, which the UK blamed on the Kremlin.

But successive governments have faced a consistent problem: how to distinguish between the Russians whose money has been made in a legitimate manner, and others.

Some high profile UK attempts to expose ownership of illegal riches have fallen short. In 2018, the May government introduced a measure called unexplained wealth orders which, where certain criteria are met, require the owner of an asset worth more than £ 50,000 to explain how they could afford it. But, so far, only four orders have been issued by the courts.

The Johnson government is now seeking to remove barriers to the use of these orders through reform contained in a much delayed economic crime bill, which is broadly aimed at bolstering attempts to root out illicit money.

“There is no place for dirty money in the UK. . . those backing Putin have been put on notice: there will be nowhere to hide your ill-gotten gains, ”said Johnson.

The legislation will establish a register that will require anonymous foreign owners of British property to reveal their identities, although lawyers and campaigners said there appeared to be loopholes.

The government has meanwhile abolished the so-called golden visas awarded to overseas millionaires, but an official review launched in 2018 into how more than 700 Russians obtained these permits has yet to be published.

Critics say the UK sanctions against those deemed to prop up Putin following his invasion of Ukraine are far less comprehensive than those imposed by other western countries.

A senior Russian executive likened the UK sanctions to “Colombia, Mexico, Argentina, and Afghanistan cutting Russia out of the drug trade”, saying they were weaker than those unveiled by the US and EU.

Among several prominent oligarchs, the EU this week targeted Mikhail Fridman, co-founder of London-based private equity firm LetterOne. He has rejected as “false” EU claims that he is an “enabler” of Putin’s inner circle.

Johnson has announced a 10-point package of measures against oligarchs, Russian banks and other companies, but the UK has not sanctioned Fridman or Deripaska.

Labor has demanded to know why Abramovich has not been sanctioned, after the opposition party said in parliament he is a “person of interest” to the UK government because of links to the Russian state.

City executives are now scrambling to figure out their full exposure to Russia, with key advisory firms starting to cut their links. Certain law firms and other professional services groups ended up working for Russian government entities.

The London Stock Exchange has meanwhile suspended trading in 36 companies with close ties to Russia, including EN + and Gazprom.

But some bankers doubt the UK government will have the stomach to fully exclude Russian businesses from London’s capital markets, and question whether British law enforcement agencies will have the financial resources to pursue oligarchs’ highly sophisticated ownership structures that often run through offshore companies.

Chris Bryant, a former Labor minister and member of the Commons foreign affairs committee, claims the government’s latest moves to crack down on Putin’s regime and money laundering in London may be too late to reverse the tide.

“Someone is dragging their heels somewhere and it’s hard not to think they are just too close to the Russians,” he adds.