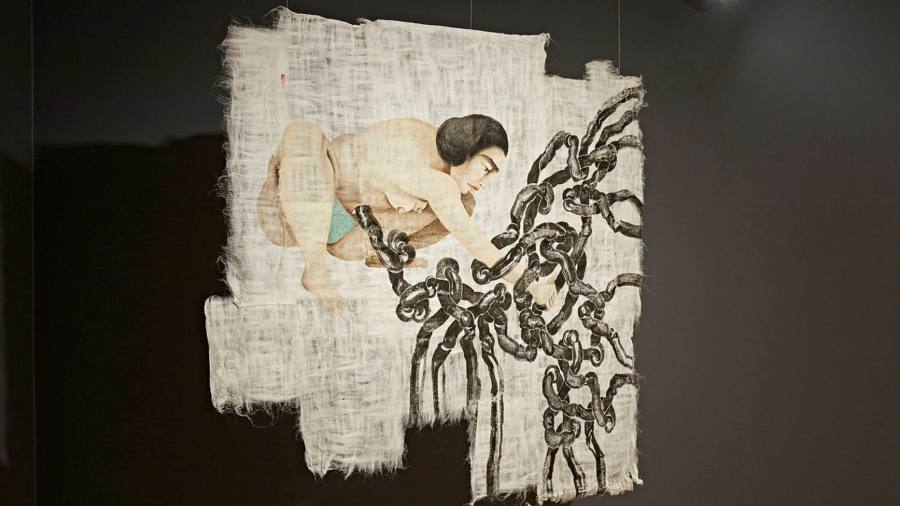 What do you get when you mix up the stylings of Arabic illuminated manuscripts, Japanese woodblock prints, Renaissance figuration and Art Nouveau graphic design? In Hayv Kahraman’s diaphanous nudes – where pigments sometimes threaten to bleed, blot and drip like acid down the canvas – these traditions come to life to spook you once again.

The protagonists of these paintings, on view at London’s Mosaic Rooms in Kahraman’s exhibition Good Feelings, are trapped in a limbo state. You can read that through a personal history. Kahraman was born in Baghdad in 1981. A decade later, during the Gulf war, her family fled the country as part of the mass Kurdish exodus, traveling under false passports through Jordan, Ethiopia, Yemen and Germany before settling in Sweden.

That experience of forced dislocation never went away – the pain present in migrant communities is the leitmotif that snakes across Kahraman’s figures, created out of dense whirls of black, mauve and ocher across earthy Belgian linen.

The artist’s ethereal women – all gauzy skin, dramatic licks of hair and calligraphic sweeps to mark their brow – recur across her work, sometimes appearing to us as dancers, as mannequins, or a priestess engaged in silent ritual. This figure, the artist has said, first came to her while she was studying graphic design in her twenties in Florence. Kahraman visited the city’s museums, earnestly making studies of Renaissance masters. Now she makes images about those images.

You can feel that art history in the counterpoise of “Entangled” (2021), in which two women with coral-pink puffs of hair strike an exaggerated figure serpentinate, weight twisted towards the center of the painting, an arm balletically raised in balance. The duo – like the group in the ancient Roman sculpture “Laocoön and His Sons” – are grappling with threatening knots of jet-black cord in a dangerous game of push and pull; the viperine lines encircle the women, on the verge of engulfing them.

For this exhibition, Kahraman has drawn inspiration from the “second brain”, the neural pathways that run through the gut. Lately, she’s been experimenting with painting with beetroot pickle juice. In one room, the sour little batons – torshia staple of Middle Eastern cuisine (and, incidentally, good for your gut) – are preserved in rows of mason jars.

On the wall opposite hangs the painting “Entanglements with torshi” (2021): the distinctive purple pigment spills out in an intestine-like coil. Four women squat – sharp creases marking the folds of their exposed bodies – as they grasp and knead the guts between them. In another scene, a woman raises a mass of entwined organs, letting the blood drool down her face and across her breast.

Kahraman’s “neurobusts” series (2021) stir and unsettle. In these paintings, the ghostly bodies are put on display as choking, fragmented effigies propped up on steel columns. The organ-like forms emerge once again, this time from the mouths of the dismembered busts, slithering out of puffy lips and gathering around the neck. These broken sculptures are bodies that feel hurt.

Kahraman’s paintings are obsessed with the gaze – ours as viewers, but also how her subjects, trapped in vulnerable, submissive positions, return the look. Art has a way of fighting back, or implicating the viewer in the drama, these images seem to say. Kahraman used to describe her sense of dislocation and trauma through violent images: women in chains or hung from a tree. That seems to have given way to a quieter sense of horror. Her women stare back, their expressions eerie and accusatory.

The conversation with art history continues. In the past, Kahraman has cut into the canvas itself, weaving in strips of older paintings to mend the wounds. Here she takes this deconstructive thinking to the linen surface, a material woven out of yarns of flax that have been broken down by soil bacteria (a series of plinths, dotted with rolls of canvas and wispy locks of thread, detail the process). Nodding to these secret microbial worlds – an allegory for foreign bodies – Kahraman has set to work on the flax fibers. In a set of paintings suspended from the ceiling, the artist has cast her stooped women, black guts streaming from their bellies, across the translucent, matted strands of flax.

Trauma is everywhere these days, of course, from our bookshelves and cinemas to social media feeds and the heart-wrenching images of broadcast news. But what might be the costs, Kahraman asks, of seeing (and valuing) people’s lives through the weight of such pain? On scraps of flax, Kahraman has inscribed the “trauma portfolio” – miniature diagrams that read “Amputations; Physical Trauma; Prosecuted; PTSD ”- a reference to the assessments conducted by NGOs and governments to help support people to claim asylum. Violence, emotional and physical, becomes a crude form of currency. Who is worthy?

The history of art is also a story of wounding and healing. In material terms, think of how a painter might seal their canvas with rabbit-skin glue, to prevent the acids of the oil paints from eating away at the fibers (a Renaissance technique that Kahraman also employs). The articulation of pain in these paintings, in which bodies squeeze up, their organs tugged out, are part of a struggle to heal the fractures too. They seem fragile, but they overwhelm us with feeling.