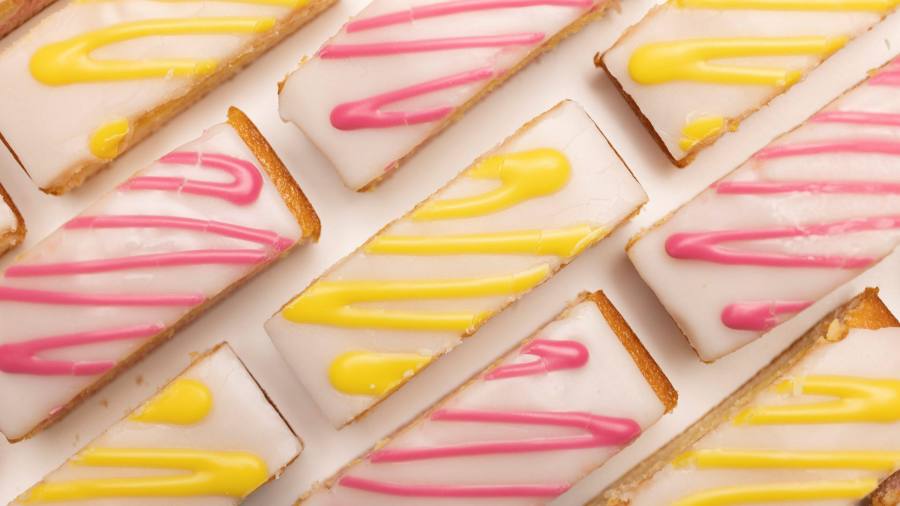 From distinctive pink and yellow Battenbergs to neat Cherry Bakewells, Mr Kipling cakes are about as British as they come.

But the brand is poised to make a bold attempt to crack the US, taking a range of its sweet treats to the home of the Twinkie.

Premier Foods, the UK-listed consumer goods group that owns Mr Kipling, is launching packaged cake products in up to 300 stores across the US by the start of April.

Battenbergs and Cherry Bakewells are not yet making the journey; instead the trial run will include four uncontroversial Mr Kipling cake slices in caramel, lemon, chocolate and vanilla flavors, after the products proved popular in a similar trial in Canada.

The move will open up a much bigger market to Premier, which has a wide product portfolio in the UK, from Ambrosia custard to Bisto gravy powder, but generated less than 10 per cent of sales overseas last year.

“[It could be] a real game-changer, ”said Alex Whitehouse, Premier’s chief executive. “If you do the maths; the US cake market is about five times the size [of the UK]. With relatively modest market share, as long as it’s sustainable, it could become even bigger than our UK market. ”

But breaking into the US is a challenge that has proved difficult for many other UK consumer companies.

British grocer Tesco suffered almost £ 1bn in losses from its Fresh & Easy supermarkets, which it launched in the US in 2006 and sold off in 2013, for example.

Those that establish a foothold often come prepared for heavy losses. Snack food company, Graze, which expanded to the US in 2013 and made $ 200mn of sales there from 2016 to 2020, suffered “multi-million dollar” losses in the same period, former chief executive Anthony Fletcher said.

“Local incumbents are more relaxed about that than probably a British company and, I’d argue, a British public company’s shareholders might be,” he added.

David Wilson, who brought alternative meat product Quorn to the US 20 years ago and now runs a consultancy that has helped British companies such as Green & Black’s chocolate to enter the market, advises clients not to over-egg the Britishness of their products. “Playing up eccentric British recipes is limiting in terms of the market,” he warned.

Premier Food’s international expansion is limited to two brands with “obvious legs”, Whitehouse said: Mr Kipling and Sharwood’s sauces. Both are already selling in Australia, New Zealand and Canada, while Sharwood’s is available in the US.

Mr Kipling cannot rely on nostalgic appeal in a market where its products are unknown. But Premier’s research shows there is an opening in international markets for cakes that are higher quality than long shelf-life products but longer-lasting than store bakery offerings.

In Australia, Mr Kipling has gained 14 per cent of the branded cakes market. After a successful trial of its cake slices in several hundred stores in Canada in 2020, where a full rollout is now planned, Whitehouse is following the same approach in the US.

Premier Foods is tweaking its UK chocolate recipe for US consumers, who are more used to Hershey’s than Cadbury’s Dairy Milk.

Packaging will also change: Angel Slices will be renamed as “Vanilla Slices”, as they compete with much-loved vanilla-flavored incumbents such as Twinkies.

The Mr Kipling sector is targeting is large and growing. Although UK sales of cakes and sweet bakes fell 1 per cent in 2020, amid a home-baking boom, sales in the equivalent $ 11.3bn US category grew 6.3 per cent, as in-store and standalone bakeries closed and shoppers turned to packaged goods, Mintel found.

But the research group expects growth to slow to 4 per cent from 2022 to 2026, as shoppers focus on their health and spend less time at home.

Inflationary pressures are also biting. Andrew Csicsila, managing director at consultancy AlixPartners, who advises consumer brands, said most of his clients were “not thinking of growth or acquisitions or new markets, they’re thinking about growth in current markets and trying to manage supply chain disruptions, from transportation , to component shortages to cost inflation ”.

The company must navigate “short-term fluctuations in pricing”, Whitehouse said.

Mr Kipling will initially make the cakes in the UK, freeze them and transport them to the US, where Canadian baking company Weston Foods will distribute them to US supermarkets. Should the test run prove successful, the company would consider investing in manufacturing facilities in the US, Whitehouse said.

He did not disclose how much Premier Foods will spend on the US trial. During the pandemic, the group has benefited from customers seeking comfort in its familiar brands, which has provided an excess of cash flow.

One top 10 shareholder said the company’s recent performance had helped “provide a stable foundation” to move into the US.

Whitehouse took over in August 2019 and in the two years to October 2021 the company reduced net debt by 30 per cent and grew sales by 7.5 per cent.

“The brand will be playing into an under-developed category and has a good pedigree,” added the shareholder. “If they get it right there is a substantial prize to be won.”