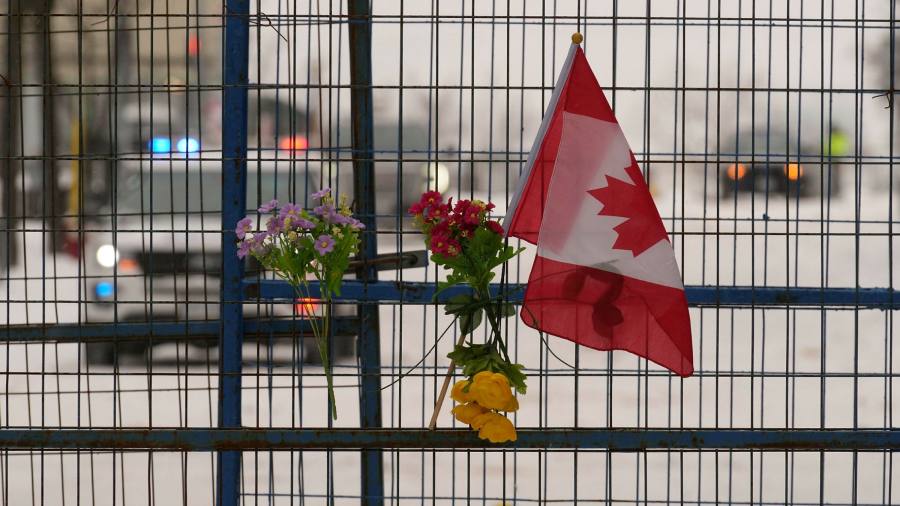 One of the largest police operations in Canada’s history has ended a three-week occupation of the country’s capital by anti-vaccine mandate protesters that prompted fears over the direction of the nation’s politics.

By Sunday morning Ottawa was quiet for the first time in 24 days, as police made a final push to clear holdouts a few streets from parliament.

About 170 people were arrested, 53 vehicles were towed, and dozens more were scared off after police in riot gear swooped on the city, encircling the protesters and pushing them away from downtown. Earlier they had set up a “red zone” in the city, secured by 100 checkpoints.

The demonstration began with a convoy of truckers protesting a cross-border vaccine mandate that spiraled into an anti-government movement that drew far-right groups, anti-vaxxers and millions in donations, including from US sympathizers. As well as laying siege to Ottawa, they blocked vital Canada-US border crossings, including the Ambassador Bridge, linking Detroit in the US and Windsor, Ontario – North America’s busiest, snarling trade.

Protesters were united by a hatred for Trudeau, reflecting increased polarization in Canada in recent years. Their demands ranged from ending restrictions to the government’s overthrow.

About 80 percent of Canadians – and nine in 10 truckers – are vaccinated. Most restrictions, including vaccine passports for restaurants, are implemented by provincial premiers, not Trudeau’s federal government.

Still, the protesters entrenched themselves, blocking Ottawa’s main streets and setting up kitchens, fuel stockpiles, administrative tents, children’s play areas and a stage. With police opting to stand aside to prevent an escalation, residents were subjected to days of continuous honking and harassment. Far-right symbols were seen, including swastikas and Confederate flags. At one of the border blockades, in Coutts, Alberta, weapons were seized and an alleged plot to harm officers uncovered.

But on Friday, police in Ottawa advanced, using pepper spray against protesters who cried “freedom” and “hold the line”. Organizers Tamara Lich, who is affiliated with a western separatist party, and Chris Barber, a trucker, were arrested, as was Pat King, an agitator and ground organizer.

Police on Sunday said they would “look to identify” protesters “and follow up with financial sanctions and criminal charges”.

Interim police chief Steve Bell said the operation would not have been possible had Trudeau not invoked the never-before used Emergencies Act, which gives the government sweeping powers for 30 days to step up enforcement, restrict public assembly, freeze bank accounts and seize assets.

Its predecessor, the War Measures Act, was used by Trudeau’s father, Pierre Elliott Trudeau, to put down a violent rebellion in Quebec in 1970. It could bring up bad memories in the francophone province, which is a key source of votes for Trudeau.

The Liberal prime minister’s opponents in the Conservative party, many of whom backed the “Freedom Convoy”, cast it as an over-reach, while scholars questioned whether the high bar for its use – a serious danger to lives or safety that can not be tackled by existing laws – had been met. The Canadian Civil Liberties Association is taking the government to court over it. 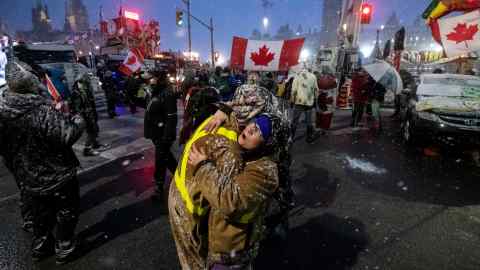 “I think the use of the Emergencies Act overall is not going to damage Trudeau’s brand,” said Lori Turnbull, a politics professor at Dalhousie University in Nova Scotia. “Everybody in Ottawa is so happy to have this out of here and if a government can not protect its own capital, then that raises really frightening questions.”

She added that “this is not going to be the ballot question” at the next general election. Still, Turnbull said, the Liberals should be wary of “looking too excited about it”.

The issue prompted chaotic scenes in parliament. After Melissa Lantsman, a Jewish Conservative MP whose grandparents survived the Holocaust, Trudeau said “fans the flame of an unjustified national emergency,” the prime minister accused the Tories of standing with “people who wave swastikas.”

Pierre Poilievre, the favorite to take over the Tories, praised the truckers and accused Trudeau of “vaccine vendettas”.

According to polling by the non-profit Angus Reid Institute prior to the act being used, two-thirds of Canadians felt Trudeau – who chided protesters as “fringe” – had worsened the situation.

However, 72 percent said the truckers should go home, among them Trudeau’s core voters. “People have short memories,” said a Liberal insider, who said the prime minister was “communicating clearly and decisively” after weeks of inaction by all levels of government.

Shachi Kurl, president of polling firm Angus Reid, said the protest tapped into an anger felt by millions of Canadians, which is not going away. Six in 10, she said, feel disengaged with what happens in Ottawa.

“Through a time of unique crisis in this country, every single leader who had a door A, door B choice to make around the politics of further division versus the politics of ‘calm things down’ have chosen consistently the politics of division, on both sides, ”said Kurl.