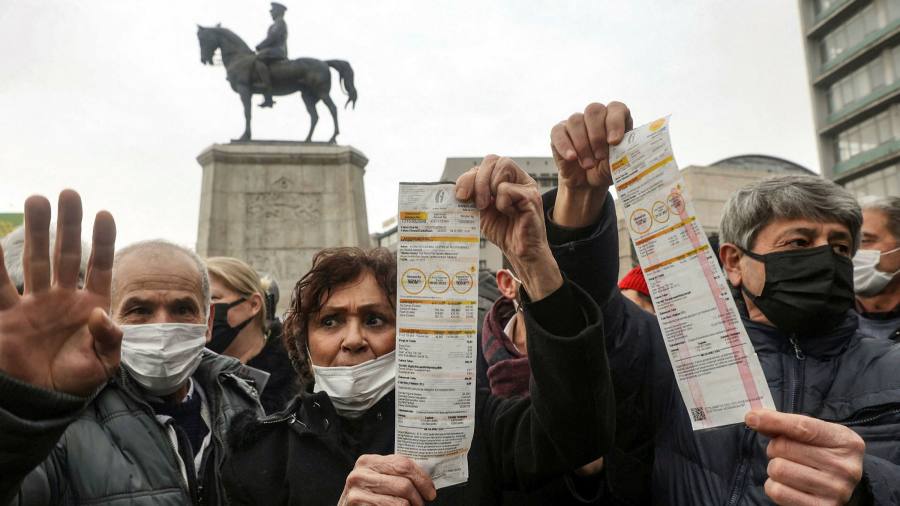 Melike was already struggling with the economic fallout from the coronavirus pandemic when the new year delivered a fresh shock. The Turkish tailor, who owns a small shop in Ankara’s socially mixed neighborhood of Esat, saw her monthly electricity bill more than double from some 200 lira to around 500 lira ($ 36) after recent price rises.

A longtime supporter of Recep Tayyip Erdogan, she has found herself doubting whether she would ever vote for the president again as crushing inflation that reached almost 49 per cent last month has hit her business and her family life.

“I’m undecided – like a lot of people,” said Melike, 46, who asked to be identified by a pseudonym because her husband has a government job. “The main reason is the economy. In the early days [the ruling party] were amazing. But in the recent period, the problems began. ”

Erdogan, who has ruled Turkey for close to two decades, must hold elections before June 2023 but faces growing public anger over the cost of energy, food and other basic needs.

Living costs have skyrocketed after the Turkish leader, a life-long opponent of high interest rates, ordered the central bank to slash the cost of borrowing last year despite rising inflation – a move that sent the lira plummeting by 44 per cent against the dollar.

Electricity prices rose by between 50 and 125 per cent in January as the plunge in the value of the currency combined with soaring global energy prices to produce eye-watering hikes in the cost of power.

Angry social media users posted their bills online while shopkeepers displayed theirs in their windows. Small protests broke out in several cities.

Kemal Kilicdaroglu, the leader of the country’s largest opposition party, announced that he would refuse to pay his bill in protest at the price rises. Turkey’s most famous comedian, Cem Yilmaz, joked that anyone who did not complain about the cost of living was either “a madman or a thief”.

In an effort to staunch the criticism, Erdogan – who had already announced a 50 per cent increase in the minimum wage in January – last week unveiled new relief measures. He pledged an expansion of state subsidies to low income households to help them pay their bills and said that authorities would raise the threshold at which higher household electricity tariffs kick in. “Today, as always, we are listening to the voice of our nation and finding solutions to its problems,” he said.

On the streets of Ankara, however, spiralling living costs are a source of mounting anxiety and hardship.

Fatma Sahin, a 70-year-old retiree, said she had resorted to collecting plastic bags and selling them to the city’s roaming waste collectors to top up her partial state pension. She can not afford to buy meat or even vegetables. “At home we eat pasta, pasta, pasta,” she said. “We are fed up with pasta.”

Kenan, a motorcycle courier for a restaurant, complained that close to half of his daily earnings of around 250 lira ($ 18) were eaten up by the cost of petrol. The 23-year-old, who lives with his parents, said his family had started watching less television to try to reduce their electricity bill.

Yet, in a sign of the challenges facing the opposition, even some of those dismayed by the state of the economy have yet to be convinced that Erdogan’s rivals would be able to fix it.

“Maybe it will take 20 years,” said Umit Ertan, 60, as she helped her husband run their small shop selling lightbulbs, vacuum parts and remote controls. The opposition, she said, was “attention seeking” with stunts such as Kilicdaroglu’s announcement about his electricity bill.

Polls suggest that while Erdogan’s ruling Justice and Development Party (AKP) supporters make up a disproportionate share of the chunk of voters who say they are undecided about who to support in next year’s presidential and parliamentary elections.

Can Selcuki, director of the Turkiye Raporu polling agency, said some may choose to stay at home on election day – a phenomenon that could work in favor of the opposition. But he said that, even in a country where ideological allegiances are more important than policy proposals, Erdogan’s rivals were missing a trick by failing to convince voters on the economy. “People want to hear about economic relief. Just as important as the content, they want to hear it in a credible way, ”he said.

Melike, the tailor, is among those who remain uninspired by the opposition. “If they come to power, I do not think it will be a lot better,” she said. She sees no clear rival to Erdogan, whom she respects for his response to the coronavirus pandemic and his transformation of the Turkish defense industry into a manufacturing powerhouse that makes armed drones, helicopters and tanks. “There is no challenger,” she said.

For now, Melike is focused on seeking to shelter her three children from the worst of the impact of the ongoing economic turmoil. “When my daughter sees that the price of chocolate has increased three times she tells me not to buy it,” she said. “How can a 10-year-old think like that?”