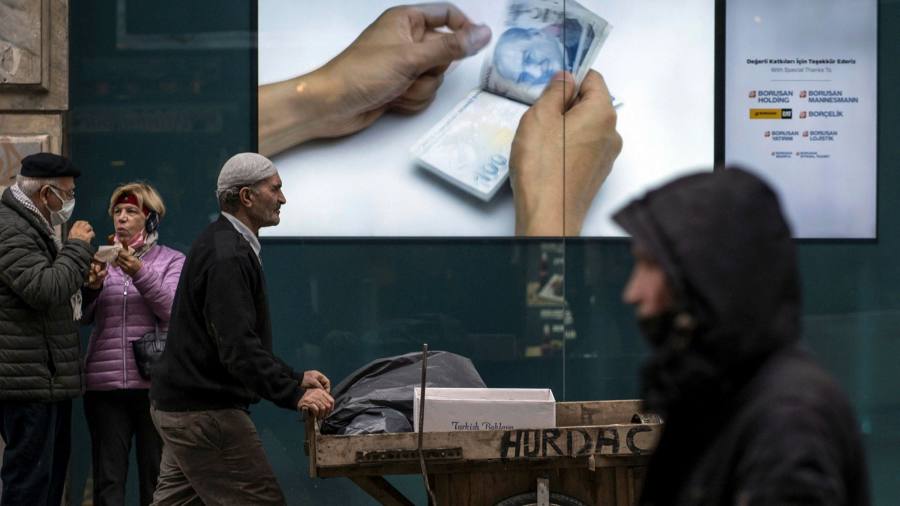 Emergency measures announced by President Recep Tayyip Erdogan last month have helped the Turkish lira to post a relatively calm start to 2022 after a chaotic December even as analysts remain deeply uncertain about its outlook.

New government-backed savings schemes unveiled by the authorities – combined with other steps including a multibillion-dollar intervention by the central bank – have restored temporary stability. But few analysts see those fixes as a lasting solution to Turkey’s currency dilemma, given Erdogan’s determination to keep interest rates far below the country’s rocketing inflation rate.

“I see this as electro shock therapy,” said Emre Akcakmak, managing director at Greenwest Consultancy in Dubai. “The patient was about to be lost and now it’s back to life. But did this cure the patient? I do not think it is a long-term solution. ”

Erdogan’s order for the central bank to cut rates four times, despite rising inflation, sent the lira plummeting in the final months of last year. As it threatened to spiral out of control in mid-December, crashing through record lows of TL16, TL17 and TL18 to the dollar, the president unveiled a state-backed savings scheme aimed at luring Turkish savers back to the national currency.

Interest in the products, which promise to compensate savers who hold lira for any exchange rate losses that they incur, has been limited so far, albeit climbing steadily. As of January 24, TL196bn ($ 14bn) had been transferred to the new mechanisms out of total banking sector deposits of TL5.4tn, according to data shared by the finance ministry with the Financial Times.

Less than 30 per cent of that shift has been driven by savers switching their dollar and euro holdings into local currency.

Still, the announcement helped pull the lira back down from its historic lows and has been followed by an unusual window of calm. The currency, which lost 44 per cent of its value against the dollar last year, is down just 2 per cent since the start of 2022, according to Refinitiv data. This compares with a fall of about 0.01 per cent for MSCI’s broad emerging market currencies gauge.

Turks’ rush to buy dollars, euros and gold, a phenomenon that puts pressure on the lira, has also cooled. Residents’ foreign currency deposits fell three weeks running in the period up to January 14, according to central bank data.

Uptake of the savings scheme could yet be bolstered by companies, which were invited to join on January 11 and have been offered a tax incentive to take part. Paradoxically, however, overenthusiastic signing-up would deepen concerns about the cost of the mechanism to the state, which will foot the bill for any exchange rate losses.

While Turkish officials have hailed the scheme as a triumph, some analysts believe that the lira’s central bank is still spending the country’s foreign currency reserves on supporting the lira, albeit at a less intense pace than in December, when it burned through at least $ 7bn .

Ibrahim Aksoy, an analyst at HSBC in Istanbul, says authorities may be using the proceeds of new regulation, introduced at the start of January, that forces exporters to sell 25 per cent of their foreign currency earnings to the central bank.

Aksoy said that the measure, which bankers say has already come into force, should contribute around $ 1.25bn a week to the central bank’s reserves based on exports of roughly $ 20bn in January. But no such increase has been observed.

“The stability in the lira is coming both from the partial, short-term success of the savings mechanism and from the fact that the central bank is probably supporting the lira,” Aksoy said.

Others cite different reasons for the tranquility observed in Turkish markets. A senior Istanbul-based banker, who asked not to be named, said that he had seen a significant push to defend the level of TL13.8 to the dollar – but that he had not seen any signs of intervention in the financial markets over the past week.

He said that “very low” trading volumes meant that “the lira can appreciate even with small ticket transactions compared to the past”. He added that large Turkish corporates complained of facing pressure from authorities to avoid making large foreign currency purchases if possible.

Erdogan, who has enjoyed a small bounce in his approval rating as markets have stabilized this month, has already declared the savings scheme a great success. Speaking last week, he said it had “skimmed the froth” off the exchange rate, adding: “We do not think we will experience the return of the excessive volatility that comes from unbalanced foreign currency demand in the markets.”

Central bank governor Sahap Kavcioglu said on Thursday that the government’s “lira-isation” plan would combine with growing exports, investment and employment to bring down inflation that stood at a two-decade record of 36 per cent in December – a strategy that has been met by skepticism from economists given the country’s deeply negative real interest rates.

Analysts warn that a host of factors could disrupt the fragile equilibrium. Guldem Atabay, an analyst at the research platform Istanbul Analytics, said that authorities appeared to be gambling on the idea that a strong 2022 tourism season would bring in sufficient foreign currency revenues to eliminate the country’s trade imbalance, long a source of pressure on the lira .

She warned that impending rate rises by the US Federal Reserve could suck capital out of emerging markets and said that a likely rise in Turkey’s inflation rate in the months ahead could cause Turks to start buying dollars again.

“They think they’re very successful in fighting back the deprecionary forces,” she said. “But I’m afraid it will backfire in the medium term.”