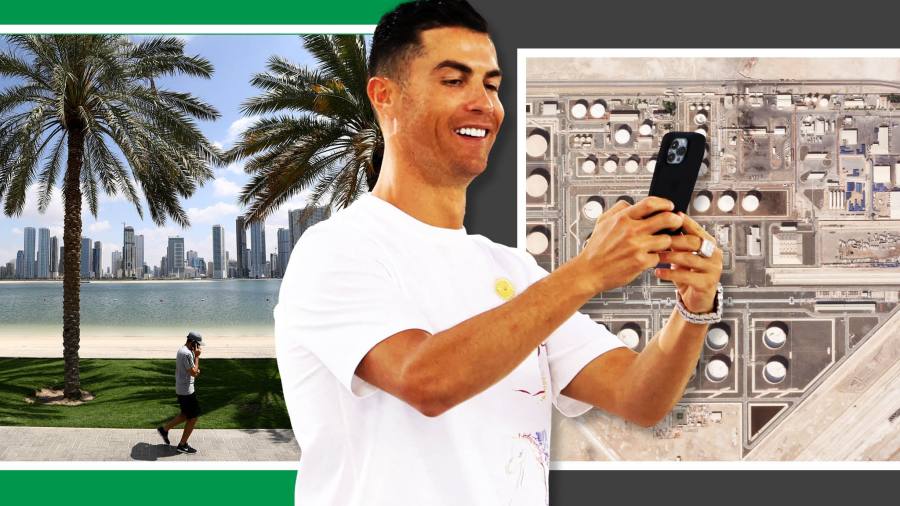 Days after Manchester United’s win over West Ham on January 22, Cristiano Ronaldo and teammates such as Marcus Rashford and Jesse Lingard took to the beaches of Dubai to spend the winter holidays.

The football stars’ visit to the United Arab Emirates underscores the traction of the Gulf’s tourism and trade hub, even when attacks by Iran-allied Houthi rebels in Yemen threaten to damage its reputation as one of the safest states in the Middle East.

Missile attacks in recent weeks have shaken people from their beds in the capital Abu Dhabi. There were explosions and flashes of light in the sky as the UAE and U.S. forces launched interceptors. “It was very scary,” said a British foreigner in Abu Dhabi. “Not something I was expecting or signing up for.”

From Lebanese professionals fleeing instability to Western teleworkers taking advantage of the country’s openness during the Covid-19 pandemic, the UAE has long been an attractive place for foreigners. This includes a constant procession of celebrities since the new year as the number of visitors to Dubai rises back to three quarters of the pre-pandemic level.

The attacks now threaten to suck the United Arab Emirates back into regional geopolitical turmoil as it seeks to focus on economic recovery as it swings out of the pandemic. “What has happened increases the perceived risk and damages the UAE’s reputation as one of the few truly stable countries in the region,” said Cinzia Bianco, a visiting fellow at the European Council on Foreign Relations.

“At the same time, these attacks do not tear that reputation apart and do not put it in full doubt yet because the UAE showed capabilities to intercept them,” she added.

Abu Dhabi had accelerated diplomatic relations with Tehran in recent years to de-escalate regional tensions. In a phone call between the UAE and Iranian foreign ministers on Thursday, Sheikh Abdullah bin Zayed al-Nahyan reiterated “the need to stop the dangerous escalation in the region”, according to the official news agency.

The United Arab Emirates took a leading role in the Saudi-led intervention in the Yemeni civil war in 2015. But it withdrew most of its military forces from Yemen in 2019, after the UAE and Saudi Arabia accused Iran of supplying the rebels with still more sophisticated drone and missile technology.

The recent success of UAE-allied local forces in land battles with the Houthis has prompted direct attacks on the capital, the first of which killed three and wounded six when a fuel depot was hit last month. The UAE and its allies responded with airstrikes on Yemen, which the UN has said experienced the world’s worst man-made humanitarian disaster due to the civil war, with an estimated 250,000 deaths.

Houthi officials have previously claimed to have attacked Dubai with their long-range drones and even mentioned the city’s world fair, Expo 2020, as a potential target in their propaganda. Officials in the United Arab Emirates have only recognized the use of its interceptors in the capital.

In a country of 10 million people, where foreigners exceed the number of citizens by nine to one, there has been a subdued public reaction.

Some of this can be attributed to the security-conscious state’s limited tolerance of freedom of expression. After the second assault, UAE state prosecutors summoned people who had shared dramatic videos of the defensive measures, saying those posts threatened to spread panic.

Multinational corporations, many of which are based in the United Arab Emirates as a launching pad for the oil-rich region, have expressed “measured concern,” said Nigel Lea, Chief Operating Officer of Sicuro Group, a Dubai-based business intelligence and risk analysis provider.

A global company moved two events to be held in the Gulf state in March to London following the attacks. “The local people are worried about it and the people of Abu Dhabi are quite worried about it. We are not used to this, ”said a foreign director based in the UAE. “It gives rise to a lot of concern.”

The United States last week called on the United States to reconsider travel to the United Arab Emirates, citing the threat of missile strikes. “If you have an American travel guide, it’s really hard to bring people in, and we live off that kind of thing here,” the director said.

The risk is that the United Arab Emirates, which is smaller and more densely populated than Saudi Arabia, will begin to face a similar level of threat as its neighbor, which is under constant threat of attack by Houthi missiles and drones. Saudi authorities have said 59 civilians have been killed in the kingdom since Riyadh began its war against the Houthis seven years ago.

“The UAE faces some of the same consequences as its larger neighbor and ally, but the United Arab Emirates is more vulnerable – a larger part of its economy depends on tourism, and it is a major global financial hub,” said Elham Fakhro. a researcher at Exeter University’s Center for Golf Studies. “The last thing it wants is for these attacks to become a regular occurrence and damage the reputation it has cultivated as a safe haven.”

Gulf state residents have over time adapted to a higher level of risk, but before the recent attacks, there was hope that these tensions were disappearing.

Ronaldo appeared to be untouched by the Houthi threat, posting Instagram footage of himself addressing fans and sunbathing on the beach with his four children. Other Premier League footballers such as Liverpool’s Andrew Robertson and Jordan Pickford from Everton posted that they enjoy rounds of golf with the Dubai skyline in the background.

Last Monday’s salvo coincided with the Israeli president’s first visit since the UAE’s normalization of ties with the Jewish state.

Once again, the British broadcaster was awakened by the sound of explosions, but the reaction from friends and colleagues was mild. “There was no discussion at all,” the expatriate said. “Nobody talks about it anymore – it’s like nothing happened.”