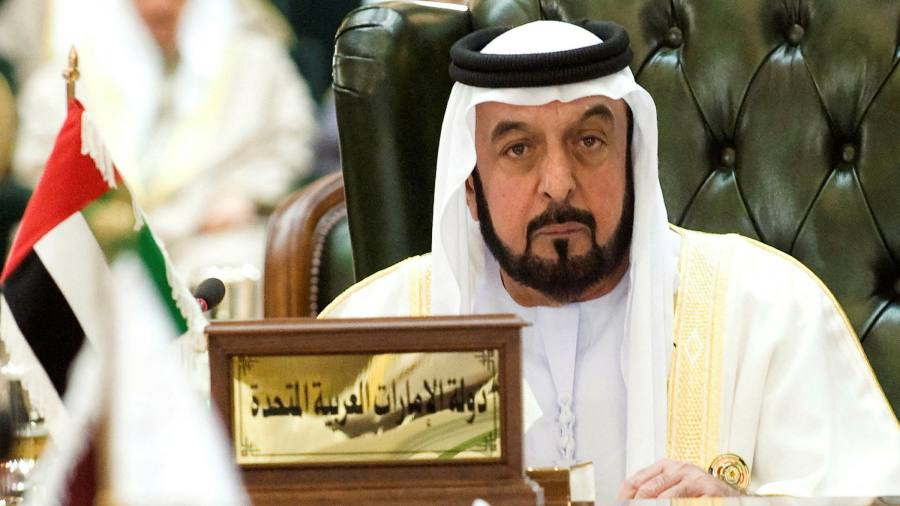 Sheikh Khalifa bin Zayed al-Nahyan, the United Arab Emirates’ president and ruler of oil-rich Abu Dhabi since 2004, has died aged 73, with his powerful brother set to become the Gulf state’s next leader.

Sheikh Khalifa, who presided over the UAE’s rapid economic transformation, had retired from public life after suffering a stroke in 2014. He had handed over decision-making to his half-brother, Sheikh Mohammed bin Zayed al-Nahyan, Abu Dhabi’s powerful crown prince . Sheikh Mohammed is poised to become the next president.

“The UAE has lost its righteous son and leader of the ’empowerment phase’ and guardian of its blessed journey,” Sheikh Mohammed said on Twitter.

The son of the UAE’s founding president Sheikh Zayed, Sheikh Khalifa was “known for his modest style and generous, decent nature”, said Abdulkhaleq Abdulla, a political-science professor. “And thanks to his capable crown prince, the country was not at a loss when he had to step back with illness. The de facto leader now becomes the de jure leader. ”

Sheikh Mohammed’s complete control over political and economic affairs removes any questions about policy direction during the succession period. Under Sheikh Mohammed’s leadership, the UAE has become a more prominent geopolitical player in the Middle East, intervening in an effort to check the rise of Islamism and plug a perceived gap in US commitment to the Middle East. The Gulf monarchy has also become a leading global investor while building domestic industry and financial services as it seeks to diversify away from hydrocarbons.

His ascent to the positions of ruler of Abu Dhabi and then president of the UAE creates an opening for a new crown prince. It is unclear whether he will follow tradition and choose a brother or, as many believe, pick his eldest son for the role.

The UAE gained independence from the UK in 1971. In its early days as a sovereign state, Sheikh Khalifa was put in charge of Abu Dhabi’s development. His eponymous committee granted loans to nationals who wanted to build towers for the growing number of businesses and expatriates seeking to capitalize on the oil boom.

The move helped broaden wealth across key families in the emirate, whose nationals are now some of the world’s richest. The legacy of this period is visible in downtown Abu Dhabi, developed as a Manhattan-style matrix of streets lined with skyscrapers.

In the 1990s, as his father’s health declined, Sheikh Khalifa acted as effective president. During that period, the energetic Sheikh Mohammed emerged with his five full brothers as the leading force within the government. The grouping includes national security adviser Sheikh Tahnoon, Manchester City owner Sheikh Mansour and the foreign minister, Sheikh Abdullah.

When Sheikh Khalifa took over from his father, Abu Dhabi launched a large investment and real estate development program led by his brother that transformed the capital as it sought to match the global ambitions of neighboring Dubai. Over time, Sheikh Mohammed became the go-to man for diplomats and business figures.

When the UAE’s second emirate of Dubai teetered on the verge of bankruptcy after the real estate crash of 2008, the city-state only avoided a sovereign default by requesting bailout loans of more than $ 20bn underwritten by the capital.

Mohammed bin Rashid al-Maktoum, Dubai’s ruler, renamed the world’s tallest tower from Burj Dubai to Burj Khalifa on its opening in 2010. The tribute was interpreted as a recognition of Sheikh Khalifa’s help for Dubai in its hour of need.

The ministry of presidential affairs has announced a 40-day mourning period, with flags raised at half-mast and three days’ closure for government entities and the private sector.