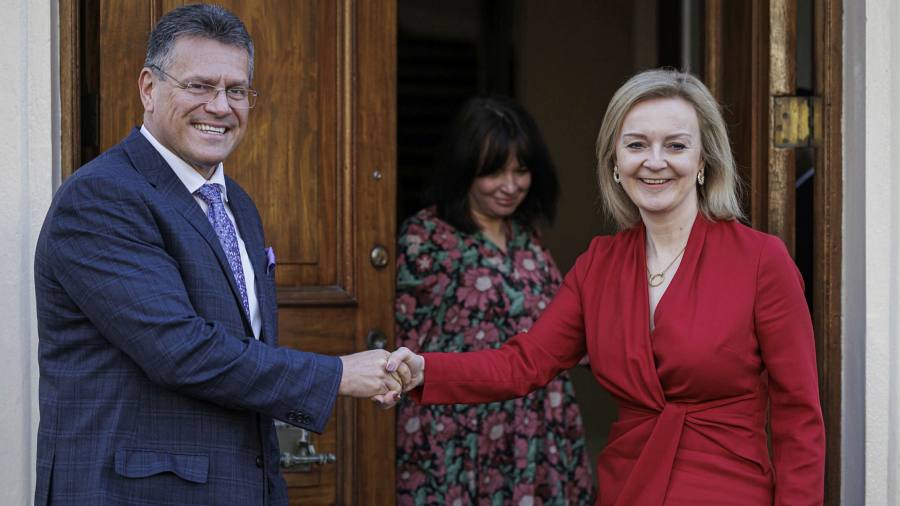 The UK has signaled it could accept customs controls on goods destined only for sale in Northern Ireland, its first significant concession during months of talks with Brussels over post-Brexit trading arrangements.

Liz Truss, foreign secretary, wants to resolve the dispute over the Northern Ireland protocol – part of the EU-UK withdrawal agreement – which has soured relations between London and Brussels as well as convulsing politics in the region ahead of elections on May 5.

Truss, who traveled to Moscow on Thursday for talks on Ukraine, believes Europe needs to work together to tackle the geopolitical crisis in the east. “Liz thinks western democracies need to work together,” said one ally.

London has so far insisted that suppliers of products shipped from Great Britain intended for sale in Northern Ireland only should no longer have to fill in customs forms as dictated by the protocol.

But British negotiators on Friday told their EU counterparts they could accept controls – though far fewer than under existing arrangements or reforms proposed by Brussels.

The verbal offer was considered so sensitive it has not yet been provided in written form.

The proposal came during Truss’s third in-person meeting with European Commission Vice-President Maros Sefcovic, held in London. British officials said there was “a constructive atmosphere” at the talks.

After the meeting the pair issued a joint statement, saying they agreed “on the need for progress in their talks in the interest of people in Northern Ireland, to stay in close touch and that officials will continue intensive discussions in the coming days”.

Truss’s team declined to comment but one ally said she had “put forward a series of constructive proposals to address problems created by the protocol” and to bring the two sides closer together. There was no single “offer” and the UK’s fundamental negotiating position had not shifted, they added.

Under the terms of the Northern Ireland protocol, all goods going from Great Britain to the region must follow EU customs and health rules to avoid a trade border on the island of Ireland itself. But this “Irish Sea border” has offended the Unionist community in the north, which favors remaining in the UK.

The commission in October had offered to create “red and green channels”, in which goods that were clearly destined to remain inside Northern Ireland, such as supermarket deliveries, would only need to provide a single customs form per load. London has now agreed to discuss this idea, but wants declarations to be even less detailed.

The two sides have yet to make progress on the trickier issue of health checks on animals and food entering the region. The commission claimed its offer would reduce them by 80 per cent but the UK is unconvinced.

Any customs agreement could be ratified by a meeting on February 21 of the Joint Committee, which manages the post-Brexit trading arrangements for Northern Ireland. The talks are then expected to be paused during the election campaign.

EU diplomats gave a cautious welcome to the UK proposal. “It’s a positive move but we are not rolling out the red carpet yet,” said one. “There is still a long way between the two sides.”

Any concessions made during the talks with Brussels could anger Eurosceptic Conservative MPs, who dislike the protocol negotiated by Boris Johnson, the prime minister, because it puts a trade border in the Irish Sea – within the UK’s internal boundaries.