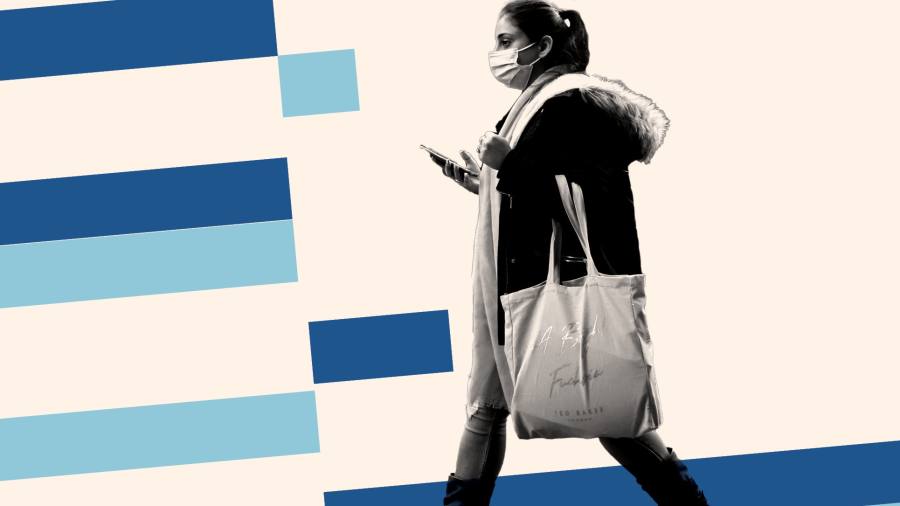 High street sales are now higher than before the Covid-19 pandemic in the overwhelming majority of Britain’s local council areas, a Financial Times analysis of consumer data has revealed.

The recovery has come despite renewed government coronavirus restrictions over the winter and the collapse of spending in shops in the heart of London.

In about three-quarters of Great Britain’s 368 local authorities, in-person sales to British customers in January were higher than two years previously, despite new rules introduced to curb the spread of the Omicron variant. In the average local authority, spending in January was 4 per cent higher than in 2020.

As all parts of the UK remove their remaining Covid restrictions, civic and business leaders are looking for clues as to what parts of the shifts caused by the coronavirus are permanent.

Much spending has moved online, commuting has dropped away and consumers have opted to shop closer to home – but it is not clear how much of this is temporary.

These effects have proved less challenging for midsized towns and cities with modest retail and service sectors. The best performing urban areas were Hamilton, Blackpool, Sunderland, Shrewsbury and Barnsley in January, where spending was up by more than 10 per cent on pre-pandemic levels.

Among the very largest urban areas, Liverpool, in the North West, has proved the most resilient: sales in January were 8 per cent higher than in the same month two years previously, despite the imposition of plan B measures, including a recommendation to work from home if possible.

By contrast, London faces serious questions about the future of its business model. Sales across the capital are still 10 percentage points below their pre-pandemic levels, driven almost entirely by losses in the very center of the city, which relies heavily on shoppers and workers traveling in.

In the City of London, in-person takings by retailers in January were 55 per cent lower than January 2020.

The data suggested a decline in spending in the area owing to plan B, which was announced on December 8. However, in November sales were 35 per cent lower than their pre-pandemic levels, suggesting that the City’s problems may be more permanent, as it was struggling before plan B.

Across Zone 1, the transport fare area that covers the commercial center of London, spending was 30 per cent below pre-pandemic levels – a gap that stood at 15 per cent in November.

This pattern contrasts strongly with the outer edges of the city in the suburbs, such as Zones 3 to 6, sometimes referred to in local politics as the “donut”. High street sales in these areas have been holding steady at 2020 levels since the end of full restrictions in July.

The outer edge of the city is generally less reliant on tourism, traveling shoppers and commuters, and benefited from having some of its residents stay, work and spend locally.

Problems in London’s center, however, are unlikely to stay there as it is so important for employment. Rachael Robathan, leader of Westminster City council, said the West End, home to some of the capital’s best known shopping and nightlife districts, “supports one in eight jobs across the capital”.

Andrew Carter, chief executive of the Center for Cities, said: “The fundamentals of London’s success remain, so in the medium term I expect the city to recover, adapt and grow, but the short term may well be bumpy.”

He added that, despite London’s wealth, the government would need to pay attention to the city’s problems.

The FT’s data set is based on spending by a sample of British bank customers, and records card transactions at merchants whose card payment machines are linked to a geographical location. The data has been shared by the Social Investment Business, a regeneration charity.

Hazel Blears, chair of SIB and a former local government secretary, said: “The solution to the problems in London is not to go back to a world where everyone has to go to the capital to sit in an office. It is to help London adjust to the fact that people have realized they can work remotely in the places they actually want to live. ”

Less populated parts of the country have also benefited at the expense of their nearby cities. East Lothian, which runs along the east coast from the Edinburgh suburbs, remains the best-performing local authority, with spending one-third higher in January than two years ago.

East Lothian has gained from a number of factors. International travel restrictions attracted Scottish visitors to the area, while the localization effect meant that commuters spent in their hometowns rather than in Edinburgh. In addition, the area has traditional small high streets, a factor associated with better outcomes.

One consistent pattern in the data is that high streets with smaller shops have tended to do better, as they are more likely to be in mixed-use areas surrounded by housing and reliant on hyperlocal trade.

But the data revealed a larger beneficiary of the pandemic than any geographic area: online retailers. Even among consumers aged over 75, the group who do the least online shopping, online sales rose from 22 per cent of sales before the pandemic to 31 per cent in January.

Torsten Bell, chief executive of the Resolution Foundation think-tank, said: “There is a redistribution between high streets here from city centers to residential areas, but the big picture is that the pandemic has also sped up the long-term decline of the high street because it has driven consumers online.