The chief executive of UK supplier Johnson Service Group has called for an extension to the country’s energy price cap, as a surge in the cost of fuel threatens to derail the recovery of a beleaguered hospitality sector.

Hotels and restaurants in the UK have been hit by two successive headwinds: the spread of Covid-19 and the rising cost of energy triggered by the war in Ukraine.

The impact has also been felt by Johnson Service Group, the London-listed supplier of workwear and linen to hoteliers and restaurateurs.

Chief executive Peter Egan noted signs of a recovery, but he urged the government to tackle concerns around rising costs and a tightening labor market.

“Coming out of lockdown — although there have been many stops and starts. . . hospitality has been recovering, not just for us, but for the industry overall,” said Egan.

The group swung to a £5.1mn pre-tax profit in the six months to June, which was announced in its latest set of results in September and followed a loss of £13.9mn in the same period last year.

Trading momentum since June “remained encouraging” with volumes in work with hotels, restaurants and the catering industry for the six weeks to the middle of August increasing to 92 per cent of normal levels.

The group noted “highly volatile” energy costs in the first half of the year. Costs were “significantly higher” than the equivalent period in 2019, representing 9.3 per cent of revenue in the six months to June 30.

Egan welcomed the UK’s energy price cap, which subsidises the price of fuel, but called for more support for the hospitality sector.

“The impact of energy increases now and the . . . challenges that pose to ourselves and customers are significant. I think [the] government needs to look at that.” 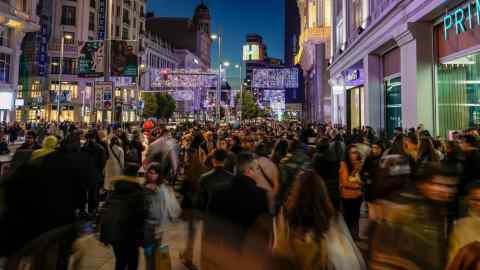 “Employment, particularly in parts of the UK, is still challenging and it would be good for the government to focus on that too,” he said.

“When [we] came out of the pandemic, because of Brexit, Covid and everything else that happened, the UK lost a lot of workers who left the country.”

Conditions were “definitely” better than the doldrums of the summer of 2021, but hiring staff is “still proving to be quite challenging” across the sector, Egan added.

China dumping its draconian ‘zero COVID’ policy could come at the huge cost of rampant infections: ‘This will spread like wildfire’


Disney battles to preserve the powers of its kingdom in Florida