Liz Truss, UK foreign secretary, is to make new proposals to break the deadlock over post-Brexit trading arrangements in Northern Ireland on Friday, saying that resolving the row with the EU was “an absolute priority”.

Truss’s allies said both sides wanted to bridge their differences, although Boris Johnson, the prime minister, warned this week that Britain could still unilaterally suspend parts of the so-called Northern Ireland protocol if no deal was reached.

British ministers have been drawing up fresh contingency plans in recent weeks in the event that Johnson activates the Article 16 override mechanism, possibly plunging the UK into a trade war with the EU.

The “carrot and stick” approach taken by Truss is intended to intensify the pace of the talks, which both sides want to wrap up, if possible, within weeks and ahead of Northern Ireland assembly elections on May 5.

Speaking ahead of talks in London with European Commission Vice-President Maros Sefcovic, Truss said: “We have a shared responsibility with the EU to work towards solutions as quickly as possible that deliver for the people of Northern Ireland.”

Truss, who will host the talks at Lancaster House, wants to reset relations with the EU. Recently returned from Moscow, the foreign secretary has told colleagues she wants Europe to unite over the crisis in Ukraine, not descend into a trade dispute over Northern Ireland.

While Johnson would win some cheers from Conservative Eurosceptics if he suspended parts of the NI protocol – part of the UK’s Brexit treaty – it would open up a range of unpredictable outcomes.

Renewed “no deal” contingency planning by ministers, which stepped up in January, has looked at issues such as possible disruption of medical supplies in the event of an EU trade war, along with much broader economic disruption.

Johnson, who is trying to stabilize his political situation after weeks of chaos, may also recoil from the idea of ​​a trade dispute that could create turmoil at the ports and possible shortages of some products. 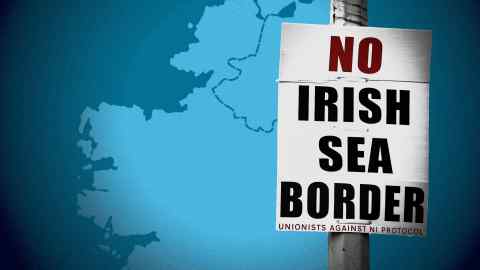 Officials on both sides cautioned against expecting a breakthrough at Friday’s talks, but said there was a joint determination to create a positive atmosphere ahead of a February 21 meeting of the Joint Committee that manages the post-Brexit trading arrangements for Northern Ireland.

Under the terms of the Northern Ireland protocol, all goods going from Great Britain to the region must follow EU customs and health rules leading to the creation of an “Irish Sea border” that the UK government has declared unsustainable.

A source with knowledge of the UK’s latest offer to the EU said that the ideas expanded upon the concept of “red and green channels”, in which goods that were clearly destined to remain inside Northern Ireland, would be exempted from border bureaucracy.

One British official confirmed that both sides were putting new ideas on the table: “We are trying to be constructive and by definition in negotiations both sides are trying to move towards each other.”

Despite the warmer tone from Truss, two senior Whitehall figures confirmed that the government had been actively “ramping up” contingency planning for the use of Article 16.

In October 2021, when Lord David Frost was still the UK Brexit minister, the British government stepped back from the brink of triggering the safeguards mechanism after Brussels warned that it would lead to the suspension of the wider EU-UK trade agreement.

However, Whitehall insiders said that since mid-January contingency planning for a suspension of the TCA had quietly restarted under the leadership of Steve Barclay, the Cabinet Office minister via the Domestic and Economic (Operations) cabinet committee.

According to a person with knowledge of the plans, Barclay advised Johnson that in the event that it triggered Article 16 the government should consider rebuilding medicine stockpiles and prepare for disruption at the Channel ports of Dover and Folkestone as a result of further French retaliatory measures.

“There is a big operation being run out of the Cabinet Office which has caused alarm in some parts of Whitehall,” one of the people said. “It all went quiet after October but really started to ramp up last month.”