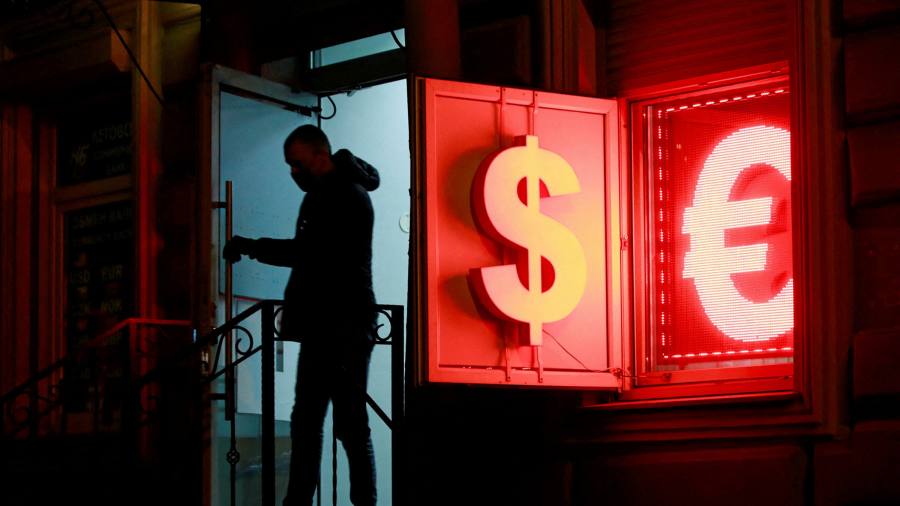 Two years ago, investors were starting to fret about something they could not properly understand.

A virus in China had kept markets on edge for a few weeks and was starting to look like it could be serious. Stocks around the world were suffering knocks of around 1 or 2 per cent a day.

Fear not, the sage minds of Wall Street said, pointing to previous outbreaks of viruses such as Zika and Ebola, which left no lasting damage to stocks. This newfangled coronavirus would probably follow a similar path and prove to be an opportunity to buy the dip, they said. We all know how deep and dark that “dip” turned out to be.

This is not a criticism as such. Hindsight is a wonderful thing. Nonetheless, that period of 2020 should stick in investors’ minds now that market participants have largely decided Russia’s latest display of military force in Ukraine is likely to mimic its annexation of Crimea eight years ago and produce only a modest and well-contained impact on global asset prices. Russia accounts for only around 3 per cent of the global economy, after all – about half as much as California.

Hedge funds that wagered Vladimir Putin would pull back from the brink – and the oligarchs with wealth tied up in Russian shares – have certainly suffered. Moscow’s Moex index has dropped almost 9 per cent this week. This is shaping up to be that market’s worst month since 2009 – well beyond the scale of Covid’s impact.

More broadly, markets have already absorbed a fair amount of Russian stress. In a note earlier this week, Goldman Sachs estimated that the tensions over Ukraine that had been bubbling up for months are responsible for a little over half of the 9 per cent drop in the S&P 500 benchmark index of US stocks so far this year.

The nerves had also pushed some investors into the safety of US government bonds, lopping around one-quarter of a percentage point off 10-year yields, the bank said. Gold – another classic bolt-hole for jittery investors – is also higher in price than it would otherwise have been. The ruble, meanwhile, is around 9 per cent weaker than it would have been without this latest military adventure, considering how far it has fallen compared to a generally upbeat run in similar emerging market currencies.

All in all, nasty, especially for Russian markets, but very manageable.

“Investors should keep things in perspective and not overreact to headlines,” says Emmanuel Cau, head of European equity strategy at Barclays. “Although equities may fall more in the near term, we note that market drawdowns due to past military conflicts did not last very long and were mostly buying opportunities.” The annexation of Crimea generated just a 4 per cent drop in European stocks in a hiccup that lasted eight days, he added.

For some seasoned Ukraine watchers, this all underplays the crisis, especially given Russia’s central role in providing oil and gas to continental Europe. “This is going to be a big conflict. There are massive risks to European energy, ”says Tim Ash, an emerging markets strategist at BlueBay Asset Management. “Beware of unexpected consequences,” he adds, pointing out that the outbreak of Covid-19 and the shock of rapid exits from subsequent lockdowns proved that even true experts in supply chains and inflation have their limits.

The big risk is that through the energy market Putin effectively makes the inflation shock biting into markets much worse and saps economic growth momentum. The US Federal Reserve has already indirectly acknowledged this. Geopolitical “risks”, “tensions” and “turmoil” crop up in the minutes of its January meeting no less than four times.

Capital Economics reckons that in the worst-case scenario, oil prices could hit $ 120 to $ 140 per barrel, well above current levels of a shade below $ 100. Europe’s already elevated natural gas prices are also likely to keep climbing, the research house said, potentially adding as much as 2 percentage points to inflation in advanced economies.

“In normal times, central banks would tend to look through an energy-led rise in inflation, but given the current high rates of inflation, and corresponding concerns about it feeding higher inflation expectations, it’s possible that this adds to the list of reasons for policymakers to raise interest rates, ”wrote Neil Shearing at Capital Economics.

The upshot is that, in markets at least, the latest Ukraine crisis is likely to get lost in the noise about inflation. But it is stalking investors nonetheless. And, in contrast to the pandemic crisis of 2020, if the market reaction does get messy, the Fed is unlikely to step in to help.

Elon Musk accuses Biden of ignoring Tesla, says he would ‘do the right thing’ at White House