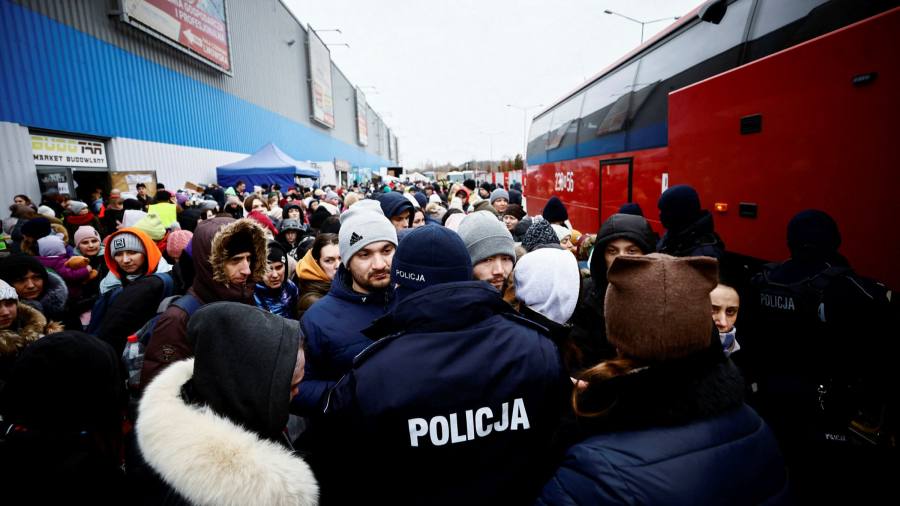 The flood of people escaping Ukraine in the wake of Russia’s invasion has become “the fastest growing refugee crisis in Europe since World War II”, the UN’s high commissioner for refugees has warned.

Filippo Grandi said on Sunday that “more than 1.5mn” refugees had fled Ukraine in the past 10 days, and officials in neighboring countries said they expected the number to rise rapidly.

The exodus has been fueled by relentless Russian attacks on populated areas in Ukraine, with cities including Kharkiv and Mariupol, where a second attempt to evacuate civilians was due to take place on Sunday, enduring particularly intense bombardment.

Poland, which has close linguistic and cultural affinities with Ukraine, and is already home to more than 1mn of its citizens, has been the initial destination for more than half of those fleeing.

Poland’s border force said on Sunday that 922,000 people had entered from Ukraine since the start of the war, including a record of 129,000 on Saturday alone. Officials expect the total figure to surpass 1mn by the end of the day.

Hungary, Moldova and Slovakia have also taken in more than 100,000 refugees each, according to data from the UNHCR.

The surge in refugees has presented a huge logistical challenge for Ukraine’s neighbors, with Moldovan prime minister Natalia Gavrilita warning on Sunday that her country, one of the poorest in Europe, would need urgent support from the international community.

“We are committed to helping all refugees in Ukraine. The government has implemented the most comprehensive humanitarian operation in the history of the Republic of Moldova, ”she said at a meeting with US Secretary of State Antony Blinken in Moldova’s capital, Chisinau.

“But the flow of people is a challenge, and we need the assistance of our friends and partners. We need this assistance quickly and with flexible tools. ”

The flood of refugees has also triggered a huge humanitarian response, with volunteers from across Europe flocking to the country’s borders to provide aid to those escaping the war.

In the main train station in Przemysl, a city in south-eastern Poland some 15km from the border with Ukraine, volunteers have been handing out free food, drinks, blankets, and sim cards. Others have offered free accommodation to refugees, while Poland’s railway has laid on free trains carrying people to bigger cities, such as the capital Warsaw.

Poland’s government has promised to provide financial support to Poles who help refugees, and has also pledged to introduce tax changes allowing companies to include aid to refugees in their costs.

“For a short period, two months, more or less, we want to financially support those Poles, who are devoting their time, their own financial resources to taking in people from Ukraine,” Prime Minister Mateusz Morawiecki said on Saturday.

At the Polish border crossing of Medyka earlier this week, the majority of arrivals from Ukraine were women and children, with men of fighting age required to stay in the country to fight.

Many had traveled for days to escape the Russian onslaught, and then spent a similar amount of time waiting to cross the border itself, with queues of cars stretching back tens of kilometers.

Some who spoke to the Financial Times said that they planned to join relatives already working and living in EU member states such as Poland and Germany. But others were still hopeful that they would one day be able to return home.

“We do not want to flee,” said Veronikova Shumovska, who fled with her children from Kakhovka, a small town in southern Ukraine and was planning to stay with friends of her parents in Poland. “We want to sit it out. Wait until it ends. And then we will all go home to our country. ”