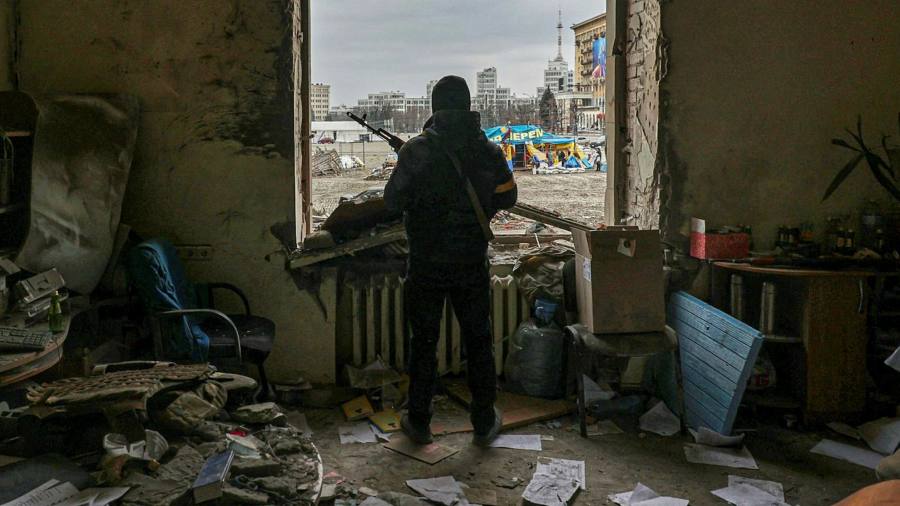 Vladimir Putin unleashed the biggest military offensive in Europe since the second world war when the Russian president ordered troops into Ukraine on February 24.

After months of Kremlin threats against Kyiv, followed by foiled attempts by Western leaders to defuse the crisis, Putin made a speech vowing to “demilitarize and denazify Ukraine”. He then ordered troops to invade the country from the north, east and south.

Within days, Putin’s war on Ukraine was creating images rarely seen in Europe in half a century: civilians sleeping underground on metro station platforms, refugees streaming across borders, city centers littered with rubble after heavy shelling.

Russian forces unleashed some of their worst violence in Russian-speaking cities in Ukraine’s east, including Kharkiv, the country’s second-largest city, where despairing residents were incredulous and angry after a week of bombardment.

Zelensky’s popularity has soared since he stepped into the role of wartime leader, delivering morale-boosting messages while wearing green military-issue T-shirts or sweaters and urging world leaders to rally behind his country.

Moscow meted out heavy bombardment on Mariupol, the southern port city that has been a stronghold of pro-Kyiv sentiment. The attacks knocked out power, hot water, heating and internet services. Isolated residents were left in dark, freezing conditions.

Cities in Ukraine’s south began to fall this week as Russian forces pushed north from the occupied Crimean peninsula, while city officials did their best to keep public services running under occupation.

Some residents of occupied towns said the invading troops were under-equipped or demoralized and taunted them openly, but others said they were worried that the occupiers might take revenge or stage propaganda events claiming locals welcomed the “liberation” of Ukraine.

Ukrainians are volunteering for civic duties, military service or collecting guns in places like Kyiv, where the military halted Russian troops’ advances. Residents of the capital are preparing for expected military assaults and a siege.

Russia’s war on Ukraine has created more than 1mn refugees, the UN said this week. It is the fastest movement of people seen anywhere in the world this century.

Kyiv on Friday warned of the threat of a “humanitarian disaster” in communities devastated by the war. The Ukrainian president’s office said it had asked the International Committee of the Red Cross for help with evacuating civilians and delivering emergency aid to areas hit by the war.

The air, ground and sea offensive ordered by Russia’s president involves three broad fronts. One front is from the south via Crimea, which Russia annexed in 2014. The second is from the east via the provinces of Luhansk and Donetsk in the Donbas region, whose separatist governments Putin recognized on February 22. The third is a broad northern front that has targeted the cities of Kharkiv, Sumy and the capital Kyiv.