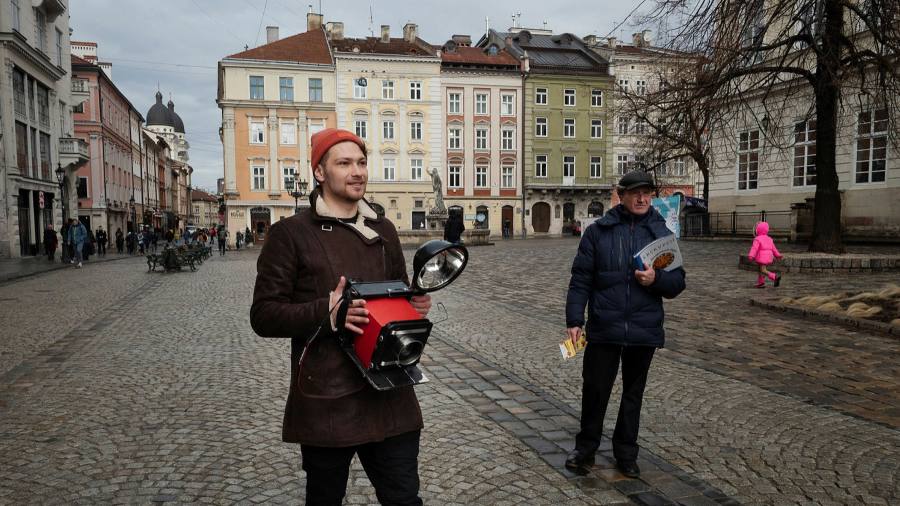 As warnings flooded in that Russia was set to launch a full-blown military assault on Ukraine, Orest Putsentela wondered whether he too should pack his bags – despite living more than 700km from the Russian border.

While normal life continued in Lviv this week, the pressure and anxieties of the escalating conflict have reached the tram-crossed cobbled streets of the city in Ukraine’s far west.

On Wednesday, Putsentela rushed to collect his children after a false bomb threat at their school, one of several intimidating calls to city institutions this week. Then a cyber attack targeting a number of Ukrainian banks left him struggling to withdraw cash.

“And that was just one day,” said the violin-maker, sitting in his apartment surrounded by musical instruments. “The situation is quite stressful.”

Ukrainian authorities blamed Russia for the cyber attack and previously accused it of being behind bomb threats. Despite the uncertainties, Lviv’s 1m residents were sticking with their routines.

“Everyone is going to their jobs, the kids were at school again the next day. It’s normal life, ”said Putsentela, 39. One street performer in the city said he sensed no fear or panic among the passers-by he stopped to photograph in the city’s main square.

Lviv, located closer to the Polish border than to Kyiv, this week became home to several western embassies who relocated there on security concerns, as they set up makeshift offices in local hotels, unsure when they could return. Organizations such as the World Bank and IMF followed suit.

Many in Ukraine, who have experienced eight years of war in the eastern Donbas region, have reacted with incredulity to the ramp-up in tensions this week, when some flights were canceled and a dozen countries called on their citizens to leave Ukraine immediately. The government in Kyiv urged calm, and argued that the embassies’ switch to Lviv was alarmist.

“We can welcome everybody here, we’ve got lots of space,” said Yurko Nazaruk, co-owner of hospitality company! Fest that employs about 2,000 people in Lviv. He flashed a grin and waved to the former glass factory below his office, offering to convert the hipster bar space into a ‘diplomatic co-working’ spot, complete with flagpoles.

Nazaruk’s ventures are often tongue-in-cheek, such as Pravda beer, known for lampooning world leaders on its bottle labels. Next, he said, might be a depiction of French President Emmanuel Macron’s recent meeting, across a now infamously long table, with Russian President Vladimir Putin.

On Friday the US warned that the situation was escalating sharply, with up to 190,000 Russian troops stationed on Ukraine’s borders, a jump from 100,000 last month.

Lviv has made preparations for any assault. “We became relaxed in recent years. . . But the tensions of the past few months have sobered us up, ”Andriy Sadovyi, Lviv’s mayor, said in an interview at city hall.

Officials have stocked up on medical and blood supplies, mapped sites such as pedestrian underpasses that could be used as bomb shelters, made plans for maintaining water supply if power is cut, and worked out how the region could accommodate an influx of refugees.

The city’s energetic response to the threat may be down to its unique identity in Ukraine.

The region, annexed by the Soviet Union in 1945, is almost entirely Ukrainian-speaking, a rarity in a country where the Russian language is widespread. It is also known as a stronghold of patriotism and nationalism.

In the city’s Jesuit Church, a middle-aged couple prayed in front of a large memorial to soldiers from Lviv killed in the ongoing war with Russian-backed separatists in the east. Photos of the dead hung on banners next to a shrine covered in shrapnel and pieces of bomb-damaged military kit.

“Lviv has always been a center for dissidents,” said Vasyl Kmet, director of the library at Lviv’s Ivan Franko University. He described the city as having a long tradition of revolt, honed against the many powers that have ruled it over the centuries.

When the Soviet bloc began to collapse, Lviv led the charge in removing statues of Vladimir Lenin – Kmet can recall helping to carry a plaster bust of the Communist leader from his school classroom. For many in Lviv, any encroachment by Russia is an unwelcome reminder of its Soviet past.

During the 2014 Maidan protests, which ousted Ukraine’s former Moscow-backed president, Lviv residents were “very active, the most active,” Kmet said. An outsized proportion of the protesters killed in those demonstrations were from western Ukraine and Lviv. Many too have been killed fighting in the separatist war.

As Ukraine’s sense of national identity hardens in the face of threats, many in Lviv feel their city is again playing an important role.

Firearms training has been made mandatory for municipal employees, and workshops for the public are widespread too. Putsentela’s 15-year-old son will visit a shooting range next week for the first time, a trip organized via his school.

The craftsman said he did not object, nor had he remembered the effects that the war threats had imposed on his business. They were painful, as the currency fluctuated and imports became more expensive, but it was better, he explained, to “suffer a bit, again, but to have sovereignty”.