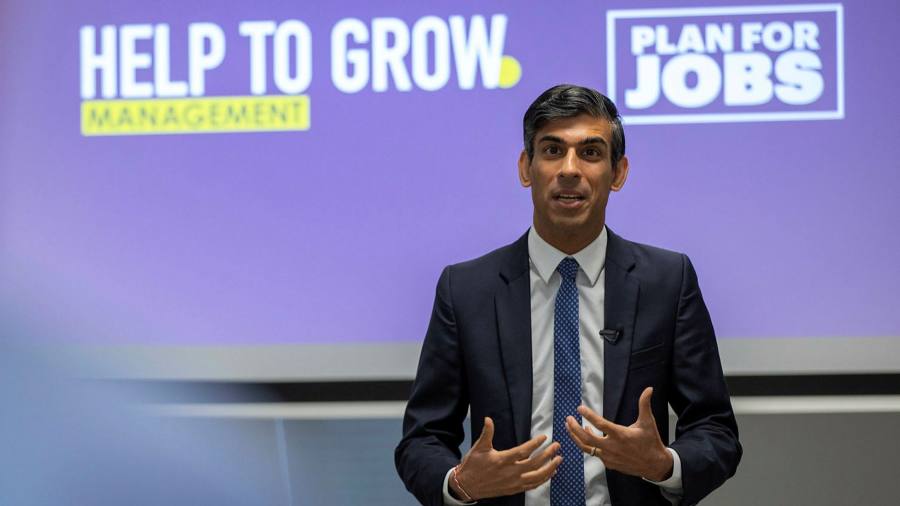 The government’s flagship scheme to boost productivity among small businesses has signed up less than a tenth of its target, leading to criticism that the Help to Grow program excludes many of the companies it aims to support.

Chancellor Rishi Sunak formally launched the scheme in August last year, calling on small and medium business leaders to sign up with a promise to boost their management expertise.

The government said it wanted to give 30,000 SMEs access to world-class business training in areas such as financial management and marketing.

But to date only about 2,500 have enrolled, according to an official close to the scheme, who admitted that the “demand side” was proving an issue despite initial claims that 10,000 businesses had registered interest.

Government officials could redesign the scheme and improve participation given widespread criticism from small businesses which said they had been excluded from it, according to a person familiar with the matter.

The scheme, announced by the chancellor in the March 2021 budget and opened for applications in May, is designed to boost productivity and growth among SMEs, which is seen by economists as a long-term barrier to growth in the UK.

Last month business secretary Kwasi Kwarteng wrote to the FTSE 250 companies, urging them to get behind the Help to Grow business scheme by promoting the program to companies within their supply chains.

Craig Beaumont, chief of external affairs at the Federation of Small Businesses, said the scheme was well-intentioned but badly designed as it excluded as many as 90 per cent of the country’s SMEs.

He blamed this on the program’s requirement that companies must have a minimum of five employees to qualify and called on the government to cut the red tape that was stopping the majority of smaller groups from using the scheme.

Beaumont said the low take-up was especially worrying given the government had made support of small companies a centrepiece of its business plans in last week’s leveling-up white paper.

Analysis from opposition Labor party showed that the scheme would only reach 6 per cent of eligible businesses. By October, the scheme had only signed up 810 companies, according to Labor MPs.

Beis, the business department, did not dispute the suggestion that only a fraction of the original target had been reached. The department said the Help to Grow scheme was giving SMEs the “tools, funding and support to thrive”.

“Feedback from participating business leaders has been very positive so far,” it said. “We urge businesses to sign up if they have not already to learn how to reach new customers, boost profits and expand.”

The Association of Accounting Technicians, a professional body, has also written to Paul Scully, the Minister for Small Business, citing “significant concerns about its unnecessarily restrictive eligibility criteria”.

AAT said the scheme excluded the UKs 170,000 charities and limited participation to just one member of staff per qualifying company. It is “no surprise that the scheme is nowhere near its target of 30,000 participants”, it added.