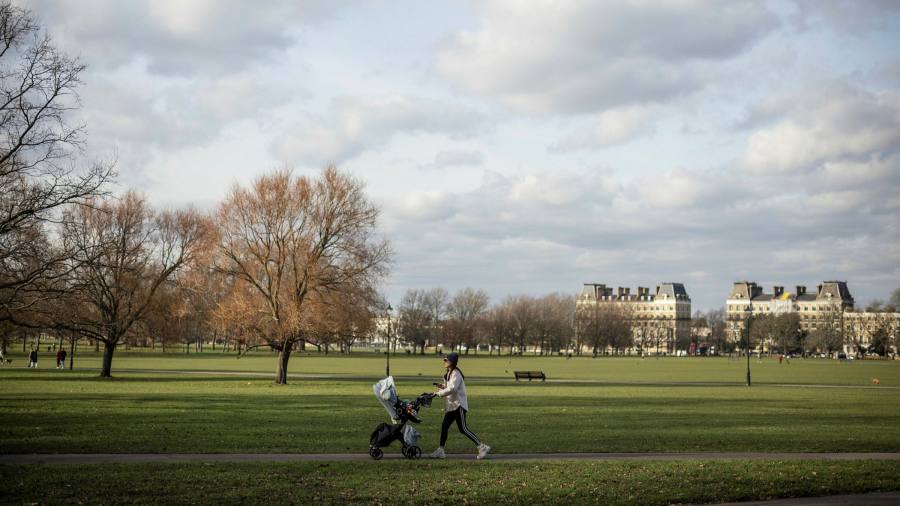 Looking for a base from which to enjoy trips to the theater and art galleries, Katie Turrell, 56, and her husband Atholl have just moved from Buckinghamshire to Clapham in south-west London. In an area once associated with young families, or with university leavers sharing their first home, the downsizing couple bought a four-bedroom house near “Abbeville Village”, a cluster of streets with independent shops and cafes, and love how well-connected their new home is to central London.

“We started off looking in Islington, then realized our money would go further south of the river,” says Katie, who’s newly retired and who lived in west London’s Brook Green 30 years ago. “Our three children [in their twenties] suggested Hackney, Dalston or Stockwell, but we found these a bit edgy. ”

Because Clapham is only 20-30 minutes on the Tube from the West End, Turrell says they do not have to dash out of the opera to get the last train home any more. “Our new neighbors on both sides are older couples,” she adds. “Although I do feel we need either a dog or a baby to be more Clapham. ”

Demand for properties around the 85-acre Clapham Common and its village hubs has meant that property prices have increased more than in surrounding areas.

In the past two years, the average property price in Clapham’s SW4 postcode – the streets around Clapham Junction fall into Battersea’s SW11 postcode – has increased 13 per cent to £ 850,180, according to real estate agency Hamptons using Land Registry data.

“Buyers of flats and houses have been prioritizing green space and village neighborhoods,” says Kesha Foss-Smith of estate agent John D Wood. Being close to the area’s “villages” – which as well as Abbeville, include “Clapham Old Town” and the busy shopping hub of Northcote Road, just across the border in Battersea – is now often as important as being close to one of the area’s Overground or Underground stations, agents say. (Clapham’s three Northern Line stations are notoriously crowded during rush hour – a trend that has resumed after the pandemic hiatus.)

Many younger buyers are helped on to the housing ladder by wealthy parents – with some choosing to buy a place for their children and continue renting it out when they move out. “It’s perceived as a fun [ . . . ] and convenient place by parents helping children on to the housing market, ”says Bradley Slade of estate agent Winkworth.

It is a market that is mostly made up of flats – predominantly Victorian houses converted into two or three apartments rather than new-build schemes. Last year, 71 per cent of the properties sold in Clapham were flats, a figure more or less consistent for the past two decades, despite the pandemic, which has reduced demand for flats in other parts of the capital.

However, prices for apartments are roughly in line with where they were five or six years ago, according to Hamptons. One-bedroom apartments with no outside space in the more affordable areas around Clapham North and Clapham South start at about £ 400,000, with two-bedroom flats starting at about £ 550,000. In the desirable pockets around Clapham Common and Old Town, prices are higher, with two-bedroom garden flats costing upwards of £ 750,000. A three-bedroom split-level flat with a large garden in the Old Town sold for £ 1.45mn last year, Slade says.

But some apartments are struggling to find buyers. According to the data company PropCast, properties for sale in the £ 300,000- £ 600,000 bracket – which in Clapham will be smaller flats – are the least “hot” tranche of the market. Currently, 41 per cent of available homes are under offer, compared with 54 per cent of £ 1mn- £ 2mn priced homes and 61 per cent of properties priced above £ 2mn. A search on Zoopla shows that many flats for sale in SW4 have already had their prices cut by 5-10 per cent.

Tara Cooper, who co-bought a three-bedroom flat off Battersea Rise with her brother seven years ago, says Clapham is still popular with new graduates. “It’s vibrant, easy to get to and it’s more affordable than Fulham and Parsons Green,” says the 28-year-old, who works in the tech sector and now shares the flat with her husband. “But it could do with a good gym that’s not a high street chain.”


Average price of a house in Clapham, according to Hamptons

Many who come straight from university will be renters, and prices have risen sharply in recent months after taking a sharp dip in 2020. While there are cheaper areas, renting a two-bedroom garden flat around Abbeville Road or the Old Town might cost £ 2,700 – £ 2,800 a month, up about 10-15 per cent since before the pandemic, says Sebastian Turk, lettings manager at Marsh & Parsons.

Demand has come from house-sharing professionals who have returned after spending the pandemic at their parents’ homes, and renters moving over from Canary Wharf and Fulham for more space if they are flexi-working. “Currently, most properties are going for best and final offers,” says Turk. “Even a two-bedroom top-floor Victorian conversion flat without any outdoor space [off the High Street] listed for £ 2,015 a month went for £ 2,350 last week. ”

In the catchment area for one of the state primary schools, four-bedroom Victorian terraced houses cost about £ 1.8mn, compared to typically £ 1.6mn outside the area, Foss-Smith suggests.

The average price of a house in Clapham has increased 12 per cent over the past two years to £ 1,516mn, according to Hamptons. Now nearly one in four homes in the area sells for over £ 1mn. At the top end of the market, larger properties in the Old Town – a mix of Georgian and early Victorian houses – can top £ 3mn. In the Old Town’s Grafton Square – developed in 1851 as a garden square with grand terraces on two sides – a four-bedroom, 2,817 sq ft end-of-terrace house is on sale at £ 3.5mn. Other prime streets are Orlando Road, The Chase and Macaulay Road.

On the latter, a detached 5,000 sq ft house sold for £ 6.75mn in 2020, bought by a (relatively rare) international buyer with children at school in the area. “These houses do not come up very often, as people tend to hang on to them for 25 years – it’s a much less transient area than Fulham [for example]”Says Alex Woodleigh-Smith of buying agents AWS Prime.

About 200 years ago, one of the largest houses in the area was built in Clarence Road by the master builder and developer of Belgravia, Thomas Cubitt, for his own family. He also planned a smart suburb of detached Italianate villas for City merchants on the 229-acre Clapham Park Estate, but it was never completed and in the 1950s Lambeth council knocked down what houses were left to make way for council flats. Cubitt’s 22-acre estate was demolished in 1905.

Katie Turrell lives only a couple of roads away, and enjoys discovering the area’s history on her daily walks and forays into her “hipster” fringes, with or without her children. “Clapham has made us fall in love with London all over again,” she says.

Two-bedroom apartment, £ 700,000 An 80-sq m apartment on the upper floor of a period building on Macaulay Road close to Clapham Old Town in SW4. The property is in a well-preserved period building with plenty of natural light. On sale with Savills.

Three-bedroom terraced house, offers in excess of £ 1.55mn A three-bedroom, two-bathroom house on Fitzwilliam Road with planning permission for a rear extension. Measuring 157 sq m, the property is located in Clapham Old Town, and is on sale with Hamptons.

Five-bedroom house, £ 2.85mn A five-bedroom, double-fronted Victorian house on Rodenhurst Road, near the sought-after ‘Abbeville village’, on the south side of Clapham Common. The property, measuring 260 sq meters, has a garden room, and is on sale with John D Wood & Co.