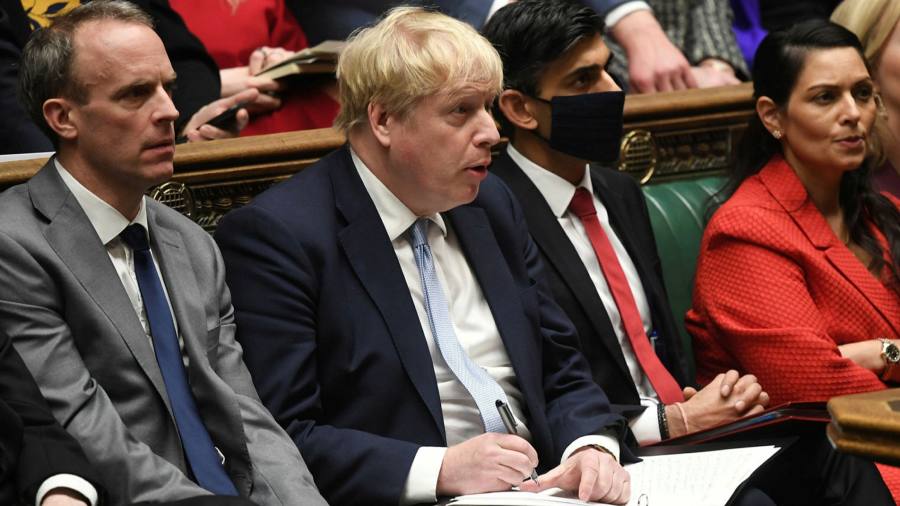 Boris Johnson entered the Commons chamber with the air of a man who had got himself off the hook. By the time he left, his allies were wondering if he had not managed to once more impale himself.

The long-delayed publication of the Sue Gray report into the lockdown-breaking social gatherings in Downing Street had looked like becoming an anticlimax after the Metropolitan Police insisted on all the most sensitive information being removed while it conducted its belated investigations.

Yet even without this information, Gray’s general conclusions were bad enough. The breaches were “difficult to justify” and pointed to an overall failure of leadership and judgment. The filleted report listed 12 events over eight different dates which are subject to investigation, including one in Johnson’s private flat. Police are studying over 300 photographs of various events.

Johnson’s defense strategy was clear. He would accept the report and apologize while shifting focus on to structural failings which he would promise to address through reforms to the Downing Street operation. In the coming days he is expected to clear out officials and advisers, and perhaps his chief whip, as a sign of his commitment to a new sober professionalism.

Yet in a statement to MPs Johnson was soon abandoning contrition. Emboldened by a sense that the rebellion against him was ebbing, he would not commit to ever publishing a full report and even refused to answer whether he was in his flat for the party in question. (Perhaps sensing that the refusal to commit to full publication was costing support, a Downing Street spokesperson later said it would be).

As a tactic this soon misfired. Johnson alienated MPs with a tone of evasion, disingenuousness and bluster. After delivering the mandatory apology, he moved rapidly on to suggest very little remorse. He attempted to smear Sir Keir Starmer, the Labor leader, with a false claim about his blocking the prosecution of Jimmy Savile. Starmer by contrast was dignified and solemn. Worse was to follow when Johnson’s predecessor Theresa May condemned his contempt for the lockdown rules he imposed on the nation. Other Tories also publicly deserted him. One who had obeyed the rules at a relative’s funeral asked if the prime minister thought he was “a fool” for doing so.

The upshot of this is to sharpen the dividing lines for Tories. While the report contained little that was new, its tone was damaging and uncompromising. The prime minister may seek to shift the blame for the culture of Number 10 on to officials, but May’s intervention was a reminder to MPs that such careless contempt for the rules would not have happened in her Downing Street.

Whether this was enough to drive Tory waverers into forcing a leadership challenge is not yet clear but it will have rallied his opponents after a week in which they were being pushed back. Furthermore it makes stark the choice in front of his MPs, since his performance signaled that Johnson’s leadership style is not about to change in any fundamental way. He may get some new advisers and officials, but he has done that once before. He may for a while be more careful about process but history suggests he can not tolerate such shackles for long.

MPs can still find reasons to delay and the odds are still against his being ousted. The police investigations continue; local elections in May will offer a truer sense of voter anger.

More importantly, the carelessness and casual attitudes that underpinned this political crisis – and all the other recent errors dating back to Johnson’s efforts to save a Tory MP who had broken the rules on paid advocacy – will not shift.

The belated commitment to publish a later version of the Gray report after the police conclude their inquiries will, if honored, mean that he can not count on this now being buried. It shows how swiftly Johnson’s allies understood he had mismanaged the Commons and heralds a new dangerous day ahead. If Johnson hoped this was the moment a line was drawn, he may be disappointed.

The report will ultimately have changed few minds. The key facts were already known. Conservative MPs may choose to stick with the prime minister, but he showed on Monday that they would be fools to think he is in any way chastened by events.