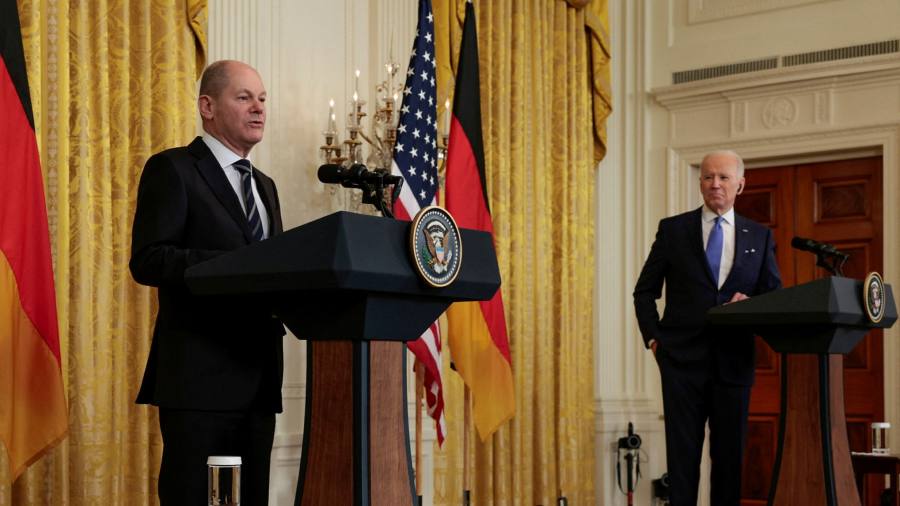 US President Joe Biden and Germany’s chancellor Olaf Scholz struggled to present a united front in the stand-off over Russia’s threat to invade Ukraine after a pivotal White House meeting exposed lingering differences over the fate of the Nord Stream 2 gas pipeline.

During a joint press conference on Monday afternoon, Biden said if Russia invaded Ukraine, the pipeline linking Russia with Germany would not become operational. “There will be no longer a Nord Stream 2. We will bring an end to it,” Biden said. “I promise you, we will be able to do that.”

Biden’s comments on Nord Stream 2, which has strained US-German relations for years, were his most forceful to date and represent a hardening of Washington’s position on one of the biggest sticking points in the transatlantic debate over what sanctions to impose on Moscow in the event of an invasion.

However, Scholz repeatedly dodged questions on the fate of the pipeline, which has been built but is not yet pumping gas, and refused to even mention the project by name. Instead, he offered a generic assurance that “there will not be any measures in which we have a different approach” and said Russia would pay a “high price” for any attack.

Biden was forced to jump to Scholz’s defense, saying Germany had the “complete trust” of the US and was one of its “most important allies”.

The US president said he did not know whether Vladimir Putin, Russia’s president, had made a final decision on whether to invade Ukraine, but noted he had the capacity to launch an attack. Biden urged about 30,000 Americans not working in the US diplomatic corps to leave Ukraine in case they were “caught in the crossfire”.

Biden and Scholz met on a frenzied day of diplomacy intended to stave off an invasion by Russia, which has amassed more than 100,000 troops at its border with Ukraine. Moscow has also started preparations for massive joint military exercises in neighboring Belarus that western officials say may involve the deployment of an extra 30,000 soldiers later this week.

As the US president and Germany’s chancellor addressed the press, Putin and Emmanuel Macron, president of France, were wrapping up their own meeting in Moscow.

The meeting did not produce a diplomatic breakthrough but Russia’s leader said Macron had suggested ideas that could form a basis for future talks on defusing tensions in Ukraine, which he said were “too early” to discuss in public.

Macron, who is set to meet Volodymyr Zelensky, president of Ukraine, in Kyiv on Tuesday, acknowledged the deep differences between Russia and the west over the Ukraine conflict, and said the two sides were looking for “new solutions” to ensure security and stability .

“We are conscious of the gravity of the situation and the imperative need in the interest of all to find the path of preserving peace and stability in Europe,” Macron said after the talks. “There is still time.”

The two leaders began their nearly six-hour negotiation sat alone at opposite ends of an enormous oval table, which the Kremlin said was a social-distancing precaution, then moved on to a lavish dinner including langoustines, Russian fish soup, and a choice of sturgeon or venison.

The wine on offer was from a vineyard on the Black Sea that jailed opposition activist Alexei Navalny, Putin’s most prominent opponent, has claimed is part of a lavish palace allegedly built for the president’s use. Putin has denied owning any of the complex.

The press conference after the talks found Putin in a jovial mood as he twice offered political asylum to Ukraine’s former president Petro Poroshenko, who is facing prosecution in Kyiv on treason charges.

Putin blamed the crisis on NATO’s military support for Ukraine, which he accused of trying to undermine a long-stalled peace process to end the slow-burning conflict in the Donbas border region. He claimed it was Russia that was threatened by NATO’s posture, which the alliance says is purely defensive.

“By moving its military infrastructure right up to our borders, NATO and its member states think they have the right to tell us where and how to deploy our armed forces and think they can demand we not hold some planned maneuvers and drills,” Putin said .

“They’re portraying troop movements along our own territory as the threat of a Russian invasion of Ukraine. Apparently the Baltic states and other neighbors of ours feel threatened. It’s not really clear on what basis, ”he added. 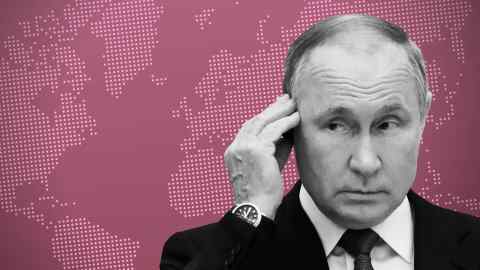 Russia is demanding Nato pledge never to admit Ukraine and roll back its eastward expansion – essentially rewriting the entire post-cold war security order in Europe. Western officials have said those requests are unacceptable but have attempted to find common ground with Moscow on other issues such as arms control.

Putin said Russia would do everything it could to find a compromise on security issues in Europe that suited everyone but warned that admitting Ukraine to NATO could “drag” the alliance’s members into a nuclear war with Moscow “in which there will be no winners”.

On a visit to Washington earlier on Monday, Josep Borrell, the EU’s top foreign policy official, warned the Ukraine crisis represented “the most dangerous moment for European security since the end of the cold war”.

He was speaking after meeting Antony Blinken, the US secretary of state, who dismissed criticism that the US was too aggressive in releasing intelligence about Russia’s intentions with regards to Ukraine. “This is not alarmism. This is simply the facts. We have to deal with the facts, ”he said.