The US House of Representatives has passed a sweeping $858bn defense spending bill that provides $10bn to fund the provision of weapons to Taiwan as the country comes under increasing pressure from China.

The National Defense Authorization Act, which is expected to pass the Senate later this month, provides five years of funding for weapons. It marks the first time the US government will finance weapons for Taiwan, which in the past has bought arms from US companies after Washington has provided approval for the sales.

Beijing has previously signaled strong opposition to the weapons measure, which comes as tensions are high over Taiwan. US-China relations remain tense despite the first in-person meeting between President Joe Biden and Xi Jinping, his Chinese counterpart, on the sidelines of the G20 summit in Bali, Indonesia, last month.

US secretary of state Antony Blinken will visit China in early 2023 to hold follow-on talks with the country’s officials, but relations are at their lowest level since the normalization of diplomatic ties in 1979.

Taiwan has emerged as the biggest flashpoint between the powers during the Biden administration as Beijing has taken an increasingly assertive stance towards the country, over which it claims sovereignty. China’s military has flown increasingly large and frequent sorties of warplanes into Taiwan’s air defense identification zone.

Tensions soared in August after China conducted large-scale military exercises and flew missiles over Taiwan for the first time to protest Nancy Pelosi becoming the first US House Speaker to visit the country in 25 years.

Congress has in recent years become increasingly critical of the Chinese Communist party over everything from the repression of Uyghurs in Xinjiang to the crackdown on democracy in Hong Kong.

It is expected to take an even more critical stance next year when the Republicans assume control of the House. Kevin McCarthy, the top House Republican, on Thursday said Mike Gallagher, a leading China hawk in Congress, would lead a “China Select Committee” that is expected to try to make the Biden administration take a tougher line on Beijing.

“This year’s NDAA takes concrete steps towards preparing for a future conflict with China by investing in American hard power, strengthening American posture in the Indo-Pacific, and supporting our allies,” Gallagher said.

The focus on Taiwan comes as concerns mount that Beijing may take military action against the island in the coming years and that the US and its allies are not sufficiently prepared for a potential conflict with China.

The US government is trying to lower bureaucratic hurdles slowing the supply of arms to Taiwan while boosting deterrence in the Indo-Pacific, including by working more with allies, and particularly Japan and Australia. 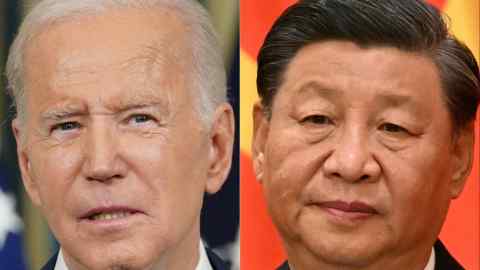 There are also increasingly calls for the US to move more quickly to prepare for any possible conflict over Taiwan, from a faster pipeline to supply arms to the need to ensure the US and Taipei have the right logistical support.

General David Berger, head of the US Marine Corps, this week said he wanted the military to move more quickly in terms of logistical preparations.

“I want us to move faster. Why? Because you never know when the other side’s going to move,” Berger told the Project for Media and National Security. “I’m very confident we’re headed in the right direction but . . . I’ll never be comfortable because I don’t know when they might make a decision.”

Berger added that the US had to posture itself — including in terms of its logistical preparations — in a way that made the Chinese think, “it’s harder than we thought” to take military action against Taiwan.