US stocks bounce back after release of Federal Reserve minutes 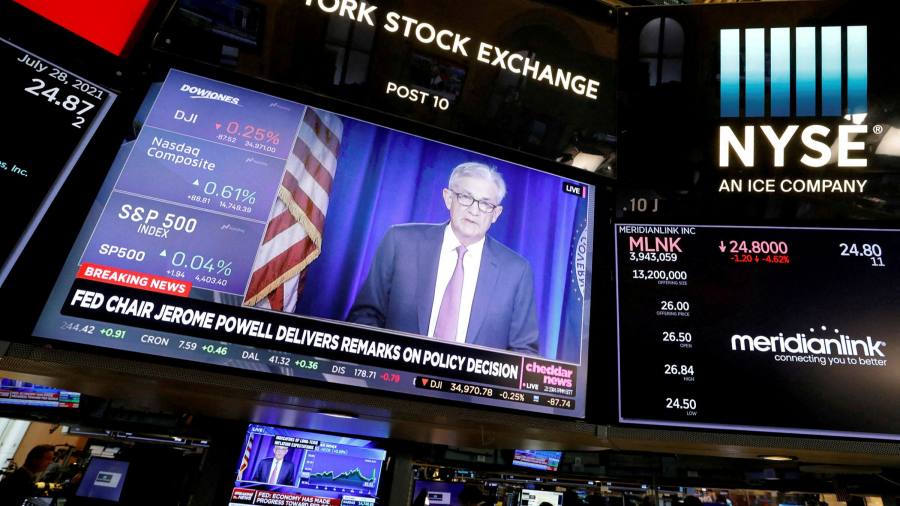 US stocks rebounded into positive territory after the Federal Reserve released the minutes from its latest policy meeting on Wednesday, as traders began to discount the prospect of a supersized interest rate rise in the months ahead.

The minutes highlighted the determination at the US central bank to combat stubbornly high inflation, but some officials also warned about the risks of damaging markets and the wider economy by tightening policy too quickly.

The fact a large group of Fed policymakers did not rally around the view of a half-a-point rate rise, a move some officials have suggested, also stood out to traders.

The S&P 500 index was up 0.1 per cent shortly after the minutes were published, having fallen 0.7 per cent earlier in the day. The Nasdaq Composite was down 0.2 per cent, compared to a 1.2 per cent decline shortly before the central bank’s update.

Pessimistic updates on the situation in Ukraine had already been weighing on stock markets earlier in the day. Jens Stoltenberg, NATO secretary-general, warned that Russian troop numbers near the border continued to rise, saying “we have not seen any de-escalation”.

The comments helped reverse some of the gains that had followed an apparent easing of tensions on Tuesday. Vladimir Putin, Russian president, said the country was withdrawing some troops from border areas to enable “dialogue” with the west.

Joe Biden, US president, later said during a briefing at the White House that there was still “plenty of room for diplomacy” to resolve the crisis. But he also noted that Russia had massed about 150,000 troops along the Ukrainian border and remained “very much in a threatening position”.

Wall Street and European equities had rallied in the previous session as oil prices fell. Yet Mike Zigmont, head of trading and research at Harvest Volatility Management, said the bullish case for equities would be “a tough one to argue” once investors turned their attention away from Ukraine and back to the Fed.

The next meeting of the US central bank’s Federal Open Market Committee is scheduled for mid-March, with economists expecting interest rates to tackle inflation, which rose in January at its fastest annual pace since 1982.

“Investors should be ready for that kind of policy change,” Zigmont said in a note. “I feel like they are not, however, and they will need to adjust as we approach the announcement.”

Investors have closely followed options and futures markets to gauge the potential fallout that could be inflicted on their portfolios by both the situation in Ukraine and the Fed.

A rise in the Cboe’s Vix volatility index, which had surged as high as 32 this week, was indicative of market stress, traders said, with the February contract trading at levels above expiring contracts for March, April and May.

Futures contracts that expire months from now tend to trade at higher prices than near-dated ones because of a relative lack of visibility.

“When that front end spikes, that is when you know there is real fear,” said Matthew Tym, the head of equity derivative trading at Cantor Fitzgerald. He added that it indicated an “imminent fear now rather than somewhere down the road”.

These stocks like McDonald's have pricing power to combat inflation, according to Wolfe Research