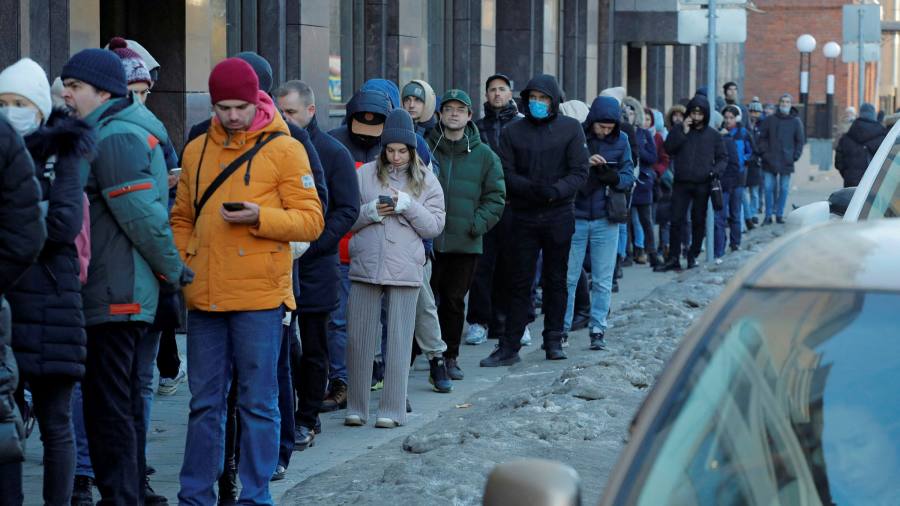 Credit card companies Visa and Mastercard on Saturday said they would suspend operations in Russia, dealing a new blow to the country’s financial system after its invasion of Ukraine.

The decision followed a request by Ukraine’s president Volodymyr Zelensky earlier on Saturday and threatens to further isolate a Russian economy facing crippling financial sanctions and a string of corporate boycotts.

San Francisco-based Visa said in a statement that it will immediately start working with clients and partners in Russia to stop all transactions over the coming days. Once the process is completed, transactions by Visa cards issued in Russia will no longer work outside the country, and cards issued elsewhere in the world will not work within Russia.

“We are compelled to act following Russia’s unprovoked invasion of Ukraine, and the unacceptable events that we have witnessed,” said Al Kelly, chief executive of Visa.

But Saturday’s move to block all transactions will worsen the nation’s financial isolation.

The sanctions announced last week had already caused Russians in Moscow and other cities to rush to withdraw cash from the nation’s banks on concerns that payment card services offered by Visa and Mastercard would stop working. Long queues have formed at ATMs waiting for fresh deliveries of cash and some western experts have warned about the liquidity of Russia’s banking system.

Earlier on Saturday, Zelensky called for the suspension of all commercial transactions, including by Visa and Mastercard, during a video call with US lawmakers.

During the hour-long zoom call with Senators, Zelensky thanked the US for its support but called for more military aid and sanctions to isolate Russia.

In a twitter post following the call, Senator Lindsey Graham said: “Anything that could hurt the Russian economy will help the Ukrainian people and may make this was more difficult for Putin.”

Mastercard, which has operated in Russia for more than 25 years, said that following its suspension of operations, cards issued by Russian banks will no longer be supported by its network, and any card issued outside of the country will not work at Russian merchants or ATMs.

“We do not take this decision lightly,” the company said in a statement, adding that it reflected “the unprecedented nature of the current conflict and the uncertain economic environment”.

The company said it will restore operations “when it is appropriate, and if it is permissible under the law”.

Amid concerns the companies could face retaliatory action from Russian hackers following their action, Mastercard said it would remain vigilant to ensure the safety and security of the global payments ecosystem and its network.

“Our cyber and intelligence teams will continue to work with governments and partners around the world to ensure that stability, integrity and resiliency of our systems continue to guide our operations and response to potential cyber attacks,” said the company.

Earlier on Saturday, PayPal announced it would shut down all its services in Russia.

“Under the current circumstances, we are suspending PayPal services in Russia,” said chief executive Dan Schulman. “PayPal supports the Ukrainian people and stands with the international community in condemning Russia’s violent military aggression in Ukraine.”