With the Russian army poised on its border, Ukraine’s president Volodymyr Zelensky made what might have been a last-ditch appeal to the Russian people to prevent the outbreak of a full-blown war between the countries.

The televised speech delivered by Zelensky early on Thursday morning in Kyiv came as Russia appeared to be inching closer to war after the Kremlin said two Moscow-backed separatist territories in Ukraine had asked Vladimir Putin to “repel the aggression of the Ukrainian regime”.

Listing his deep personal ties to the Donbas region in eastern Ukraine, Zelensky stressed that Ukraine wanted peace and urged Russians to question the information presented to them by domestic state television.

“Lots of you have relatives in Ukraine, you studied in Ukrainian universities, you have Ukrainian friends. You know our character, our principles, what matters to us. Listen to yourselves, to the voice of reason. The people of Ukraine want peace, ”he pleaded. “They’re telling you that this flame will liberate the people of Ukraine, but the Ukrainian people are free.”

Ukraine was encircled by almost 200,000 Russian troops and thousands of armored vehicles, which had been given the green light to step forward and enter Ukraine, he acknowledged. Earlier on Wednesday, Ukraine declared a state of emergency and urged its citizens to leave Russia.

“This step could be the start of a major war on the European continent,” Zelensky said. “The trigger could happen at any moment, any provocation, any spark – that spark could burn down everything.”

Zelensky, a former comic who made an unlikely entrance into politics, has often downplayed the prospect of war with Russia, even as Moscow massed troops along Ukraine’s border and western officials grew increasingly alarmed at Putin’s actions. 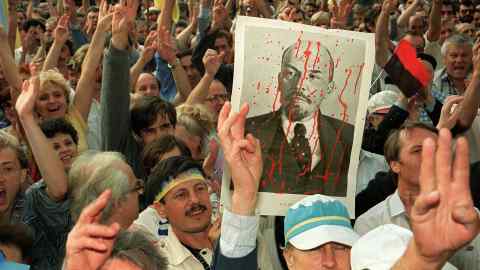 Zelensky urged Russians not to trust Moscow’s narratives about Ukraine, including the often-repeated claim that its citizens supported Nazism. “Ukraine in your news and Ukraine in reality – that’s two different countries,” Zelensky said.

He asked how he could possibly order artillery fire on Donbas, where he said he spent much time, had close friends and buried the relatives of friends.

“We know for sure that we do not need war, not cold war, not hot war, not hybrid war,” Zelensky said. But, he warned, if anyone tried to snatch away Ukraine’s freedom, the country would defend itself.

“Attacking us, you will see our faces, not our backs,” he said, warning of the tens of thousands of deaths that could come.

“I know this speech of mine will not be shown on Russian television,” he said. “But the citizens of Russia must know the truth. And the truth is this needs to stop before it’s too late. ”

“Do Russians want war?” he asked. “I wish I had the answer, but the answer depends only on you.”