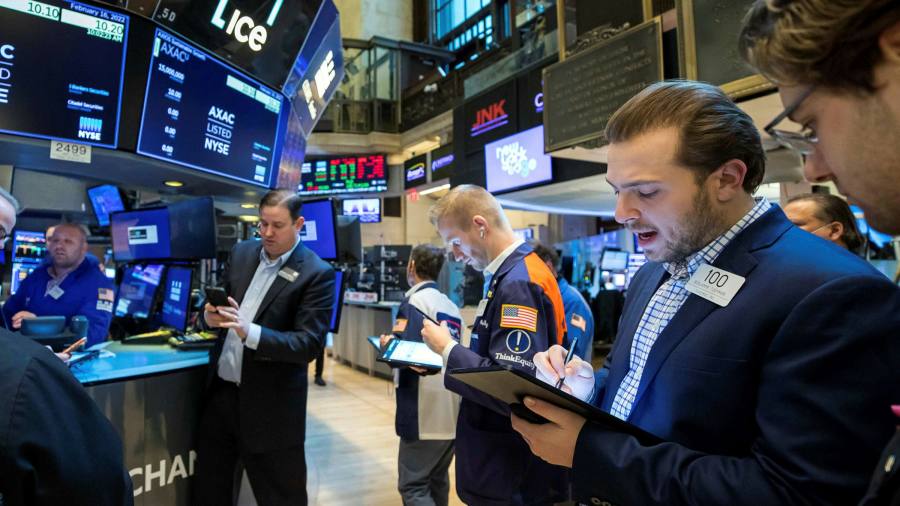 Wall Street and European stocks sank on Thursday while haven assets rallied, as the US said Russia was on the brink of invading Ukraine within several days.

The blue-chip S&P 500 index was down 1.5 per cent in the afternoon in New York and the tech-focused Nasdaq Composite lost more 2 per cent, leaving both benchmarks down more than 2 per cent so far this month.

In a tweet on Thursday morning, Linda Thomas-Greenfield, US ambassador to the UN, said “the evidence on the ground is that Russia is moving towards an imminent invasion”.

Speaking at the White House later on Thursday, US President Joe Biden said there was a “very high risk” of a Russian invasion, adding he believed that Moscow was engaged in “a false flag operation to have an excuse to go in”.

Russia’s Moex share index dropped 3.7 per cent, while the ruble lost 1.4 per cent against the dollar.

Elsewhere in Europe, the region-wide Stoxx 600 index closed 0.7 per cent lower and London’s large-cap FTSE 100 dipped 0.9 per cent. Meanwhile, the mid-cap FTSE 250 slid 1.2 per cent, with travel stocks among the steepest fallers.

Financial markets have whipsawed over the past week as developments in Ukraine added to nerves already frayed by surging inflation and central banks’ tightening monetary policy.

“The [stock] market was under pressure already, with geopolitical tensions now adding to that, ”said Hani Redha, global multi-asset manager at PineBridge Investments. “It was already raining and now it’s pouring.”

The market unease spurred investors to seek haven assets such as core government debt and gold.

“Everything is unconfirmed and we’re at an impasse until we get more confirmation,” said César Pérez Ruiz, chief investment officer at Pictet Wealth Management. “It’s natural to take a bit of profit at this point.”

He added: “Markets are already nervous about the [Fed] moving too quickly [with interest rate rises] and killing the economic cycle. ”

Money markets have priced in more than six quarter-point rate rises by the Fed this year after US inflation surged to a four-decade high in January.

Minutes from the Fed’s policy meeting on Wednesday highlighted its officials’ determination to combat stubbornly high prices, although some warned about the risks posed to markets and the wider economy by tightening policy too quickly.

Oil markets remained choppy. Brent crude, the international benchmark, fell 2.4 per cent to $ 92.56 a barrel, having fluctuated during the week in response to speculation about how possible western sanctions on Russia could disrupt fuel supplies.

Why I wrote Tomorrow’s Capitalist, my upcoming book on the stakeholder capitalism movement