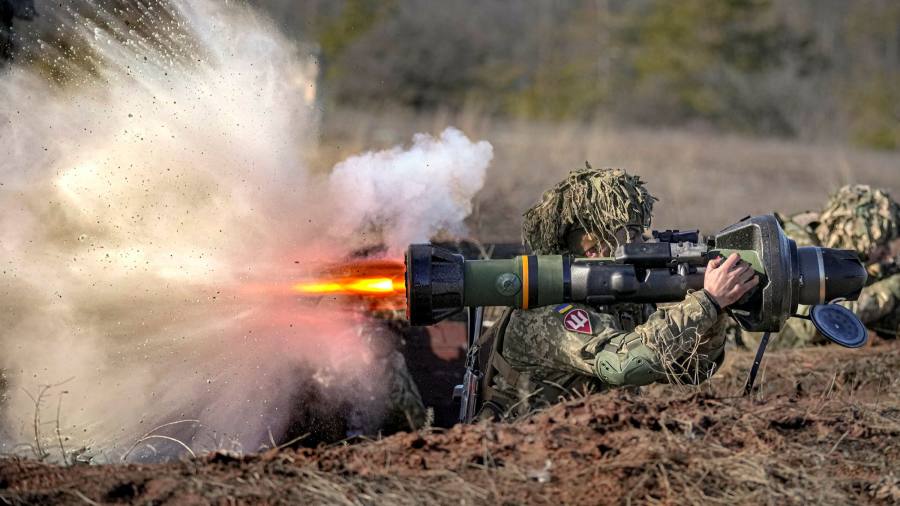 NATO members have held back from supplying offensive military support to Ukraine for fear of provoking Russia. That may be about to change.

Western countries, including the US and UK, have already provided Kyiv with training and defensive NLAW and Javelin anti-tank weapons as well as Stinger anti-aircraft missile systems to help deter a Russian attack. They are now weighing how to support Ukraine resistance forces if Russia decides to further invade or continue intimidating its neighbor, according to western officials.

“If Russian pressure is prolonged, we will need to take a very different approach to what we have done so far and look hard at how to manage that confrontation as part of an enduring process,” said one senior western official.

Washington estimates Russia has massed between 150.00 and 190,000 troops on Ukraine’s borders, who, combined with missiles and air cover, could quickly overrun Ukraine’s 261,000 active personnel.

But a well-supported resistance would make a Russian occupation prohibitively costly and NATO allies hope that such a prospect could shift President Vladimir Putin’s calculus against launching a full-scale invasion.

It was in the west’s “collective interest that Russia should ultimately fail and be seen to fail” if it launched a full-scale invasion, UK Prime Minister Boris Johnson told the Munich Security Conference on Saturday.

“A lightning war would be followed by a long and hideous period of reprisals and revenge and insurgency,” he added. “If Ukraine is overrun by brute force, I fail to see how a country encompassing nearly a quarter of a million square miles. . . could then be held down. ”

Johnson held talks with his counterparts from Latvia and Estonia, where they “agreed to continue working together to impose a significant cost on Russia should [it] decide to further violate Ukraine’s sovereignty ”.

US defense secretary Lloyd Austin and General Mark Milley, chair of the joint chiefs of staff, have already warned their Russian counterparts that an invasion would be followed by an insurgency like the one that drove the Soviet Union out of Afghanistan, the New York Times reported last week. Biden administration officials have also told allies the CIA and Pentagon would help any Ukrainian insurgency with covert and overt aid.

Two people close to the Kremlin told the Financial Times the military cost of an occupation was already so obvious that claims by US and UK intelligence that a Russian invasion was imminent was evidence of western “hysteria”.

“Nobody thinks Ukraine is something you can just grab,” said one senior former Kremlin official. “It’d be very unpopular domestically because so many people have relatives there, and you can not hold the territory because of partisan warfare.”

Ruslan Pukhov, director of the Center for Analysis of Strategies and Technologies, a Moscow-based defense think-tank, said Russia would likely stick to “managed escalation” in the eastern Ukrainian region of Donbas, ravaged by a conflict with Moscow-backed separatists since 2014 and Russia’s annexation of Crimea.

“I do not believe in a large-scale military campaign,” Pukhov said. “It’s not clear what [Russia] would get out of a campaign involving taking territory other than more problems. ”

Unless Moscow extensively co-opts local collaborators, occupying the entire country would require 20 Russian combatants for every 1,000 Ukrainians, equivalent to a force of almost 900,0000, according to a 1996 Rand study.

Recent polls also indicate that while most Russians believe the west is to blame for the current tensions, they have little appetite for war. Their Ukrainian relatives would also get caught in the crossfire if Russia used the brutal counter-insurgency tactics it employed in Syria and Chechnya.

“In Aleppo and Grozny, Russian forces could reduce the towns to rubble, plant a flag on top and declare victory,” said Mark Galeotti, a Russia military expert. “But Ukraine is a brother country.”

Ukraine has a long history of resistance movements, and the government passed a law last year for “total national defense” that gave special operations command responsibility for organizing resistance forces.

Nationalist insurgents fought Soviet forces in the west of the country until 1949. Much of the fighting against Russia-backed separatists in the Donbas was also undertaken by volunteer battalions, who notched up some battleground victories and have since been incorporated into the national guard.

“The resistance in Kyiv would be huge,” said Andriy Zagorodnyuk, a former Ukrainian defense minister and director of the Center for Defense Strategies think-tank.

Ukrainian army units have been trained for guerrilla warfare, with small groups of 20 to 50 troops using “mosquito” tactics of attack, Zagorodnyuk said.

NATO allies, which have long experience of training and equipping missions from Afghanistan, Syria and Iraq, have also increased military aid.

Over the past year, the Biden administration has approved about $ 850mn in military equipment for Kyiv. Among Nato allies, the Netherlands last week authorized delivery to Kyiv of protective military equipment as well as sniper rifles, while Canada delivered machine guns, night vision and surveillance devices.

Even so, sustaining a resistance movement is difficult, analysts caution, and carries significant risk to human life and of a wider conflict between NATO and Russia.

Western special forces have been in Donbas for several years, said a Ukrainian military intelligence officer, acting as frontline observers to study Russian tactics and help Ukrainian forces with targeting. Support for an insurgency would imply deeper involvement.

Insurgents could receive training and shelter across Ukraine’s borders with Romania, Slovakia and Poland. In turn, Moscow could interpret every insurgent operation as NATO aggression, which could lead to further escalation, especially if a border incident occurs, according to Emily Harding, senior fellow at the Center for Strategic and International Studies.

Another complication is eastern Ukraine’s open terrain, which makes it ill-suited to guerrilla warfare. The cost to life may also render futile resistance.

“There has been a lot of talk about Ukrainian resistance – a gun in every window,” Samuel Cranny-Evans, an analyst at the Royal United Services Institute, told UK MPs this month. “But given that we have seen what Russian counter-insurgency looks like in Syria and Chechnya. . . that eventuality should be treated with some level of concern because it would be potentially a humanitarian disaster. ”