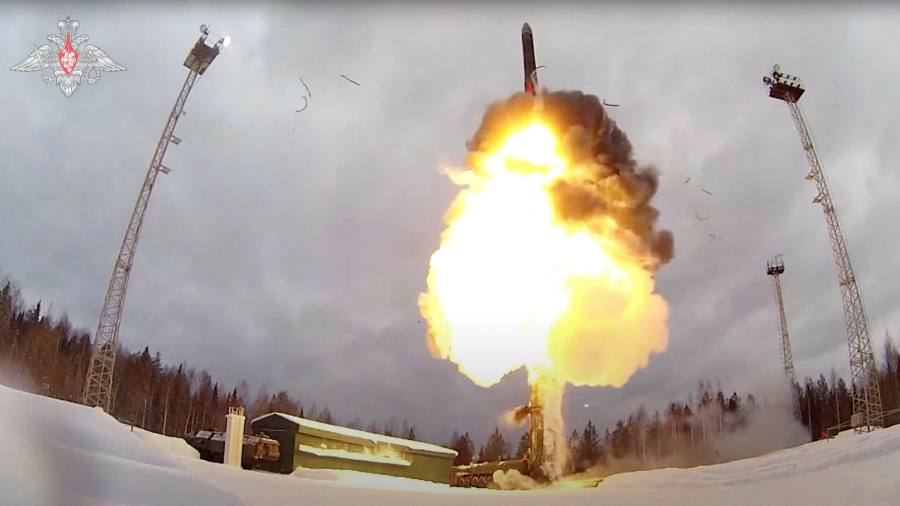 Western capitals have long been anxious about Moscow’s military doctrine, which allows it to use nuclear weapons to end a conflict as part of its “escalate to de-escalate” strategy. So when on Sunday Russian President Vladimir Putin put strategic nuclear forces on high alert, they took it seriously.

Putin’s decision to prepare Russia’s nuclear weapons for increased launch readiness – the first time since the Cuban missile crisis that a nuclear power has taken such a step – sparked immediate condemnation from the US and NATO that it had made the world “much more dangerous”.

“This is not only an unnecessary step for him [Putin] to take but an escalatory one, ”said a senior US defense official. “Unnecessary because Russia has never been under threat by the west or by NATO and certainly was not under any threat by Ukraine. And escalatory because it is clearly potentially putting at play forces that, if there’s a miscalculation, could make things much, much more dangerous. ”

Announced amid an invasion of Ukraine that has struggled to achieve Moscow’s primary objectives and a day after the US, EU and other western allies unveiled potentially crippling economic sanctions, it signaled the Kremlin felt that it had no option but to intensify its threats, analysts said .

“There’s a real possibility Putin could turn to nuclear weapons if he continues to experience military setbacks and sees the diplomatic and political situation crumbling,” said Caitlin Talmadge, a nuclear policy expert at Georgetown University.

“It’s not just a response to how his conventional campaign [in Ukraine] is going, but to these other developments, with sanctions and Germany sending weapons to Ukraine, ”she added. “The entire picture to him looks pretty bleak. If he wanted to use tactical nuclear weapons to achieve [his aims] in Ukraine, he could do that. ”

Putin’s order, which applies to Russia’s traditional nuclear deterrent and its new hypersonic missiles, does not mean he is ordering Russia to prepare for a nuclear strike.

But according to Russia’s nuclear doctrine, published in 2020, the Kremlin “reserves the right to use nuclear weapons”, including for the prevention of an escalation of military actions and their termination on conditions that are acceptable to the Russian Federation and / or its allies. ”

Western countries interpreted that as a lowering of the bar for the use of nuclear weapons: until 2020, Moscow’s stated policy was to use nuclear weapons when “the very existence of the state is threatened”.

“This really is Russia’s military strategy to backstop conventional aggression with nuclear threats, or what is known as the ‘escalate to de-escalate strategy’. The message to the west, NATO and US is not get involved or we can escalate things to the highest level, ”Kroenig said, adding that he thought Putin was bluffing.

Putin’s decision on Sunday comes after he warned, at the outset of his invasion of Ukraine last Thursday, that any attempt by other countries to “meddle” would be met with consequences, a phrase interpreted to mean possible nuclear attacks.

Since Thursday’s invasion began, Russia has failed to capture Kyiv or Kharkiv, Ukraine’s two biggest cities, and suffered heavy losses against a far stronger Ukrainian defense than even its allies expected.

In addition, western countries have agreed on a sanctions package that cuts off some Russian banks from the global Swift financial messaging network and attempts to prevent Russia’s central bank from using its $ 630bn worth of international reserves, the toughest economic restrictions imposed on Moscow.

The nuclear announcement also came shortly after Russian and Ukrainian government delegates agreed to meet for talks, the first such discussions since the invasion began. Lawrence Freedman, emeritus professor of war studies at King’s College London, said Putin may see the threat of a nuclear strike combined with the offer of a potential peace deal as a “way out of this mess he is in”.

“While this might be an attempt to deter the West from imposing new, harsh sanctions on the country’s financial sector or supplying weapons to Ukraine, the move escalates tensions between Russia and the west to an unprecedented level,” said Andrius Tursa, eastern Europe expert at political risk consultancy Teneo. “The fact that Putin is turning into a pariah on the international stage makes him even more dangerous and unpredictable.”

Under the order, Russia could begin dispersing intercontinental ballistic missiles from their bases and fitting them to long-range heavy bombers, threatening the US, or moving tactical warheads from their centralized storage facilities to their deployment locations, threatening Ukraine, said James Acton, a senior fellow at the Carnegie Endowment.

While conventional clashes between nuclear-armed Pakistan and India in 2000-2001 alarmed the world and Israel began preparations to make nuclear weapons deployable during the 1973 Yom Kippur war, Putin’s decision is the first time a recognized nuclear state has overtly moved to such a state of preparedness since the 1962 stand-off between Washington and Moscow over Soviet nuclear missiles in Cuba.

Putin’s order is a “preliminary command” rather than active preparations for a strike, said Pavel Podvig, a senior research scientist at the UN Institute for Disarmament Research in Geneva.

“In peacetime the system is there, but the circuitry is disconnected. So you can not physically transmit the signal even if you want to, ”Podvig said. “Even if you press the button, nothing would happen.”

Podvig warned, however, that “there is a deficit of rational thinking in certain quarters” that added to the tensions. “People said invading Ukraine was crazy and irresponsible – this is an order of magnitude higher.”