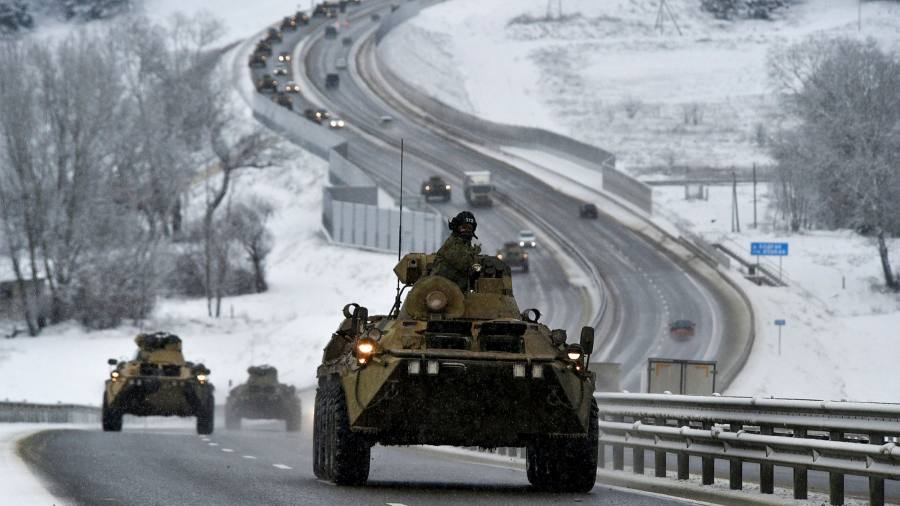 The US and its European allies are getting “pretty close” to agreeing a far-reaching package of potential sanctions aimed at deterring Russia from attacking Ukraine, a senior US state department official has said, as he warned that Vladimir Putin could act any time.

Derek Chollet, counselor at the state department, said the Russian president would suffer a “major strategic setback” if he invaded Ukraine given the scale of the penalties being lined up by the west. Any sanctions ultimately agreed would be “dynamic”, meaning the allies could “evolve and innovate” after the imposition of the initial tranche as they seek to maintain pressure on Moscow.

“We are progressing apace – and if the contingency arises where Russia moves we are going to be ready,” Chollet said in an interview with the Financial Times following talks with EU counterparts in Brussels on Thursday.

Some EU member states have in recent days expressed private concerns about the impact further Russian sanctions will have on their domestic economies, while broadly standing by the west’s pledge for swift and severe penalties in response to a Russian invasion of Ukraine.

Officials however insist they remain confident that the EU will respond quickly alongside the US and other allies if Putin moves in the coming days or weeks. The EU goal has been to tee up a package of sanctions in co-ordination with the US, UK and others to be ready well ahead of any action by Russia, in contrast to 2014 when the west was caught off-guard by Putin’s move on Crimea.

Chollet said the advanced state of sanctions planning meant the situation was “night and day” compared to 2014, when it took months for the west to settle on sectoral sanctions following Putin’s annexation of Crimea.

“Putin should not question in any way the credibility of what the US and the Europeans have said about this,” he said.

The European Commission has been consulting with EU capitals to gauge their views on differing sanctions options, while keeping the full details of its plans private – in contrast to the US which has been more public about its intentions.

Any sanctions package would need to be agreed in detail and unanimously signed off by all 27 EU member states, most likely after an emergency summit of leaders.

Italy’s ambassador to the EU warned of the economic impact of sanctions on Italian businesses, during a private meeting of diplomats last week, according to multiple people familiar with the discussion. The ambassador supported the EU-US work on the sanctions package while stressing the costs needed to be evenly shared between member states.

Brussels is determined to minimize the extent to which member states negotiate carve-outs from the sanctions package in order to dull the impact on industries with big exposure to Russia.

Nevertheless, diplomats expect unity to hold. “The response would be a quick and good one; we have never seen this kind of unity and appetite to act, ”said one.

Chollet insisted the “door to diplomacy is open” but warned the deployment of Russian troops in Belarus was worrying because it “suggests optionality in terms of what they may be thinking of doing in Ukraine”. The Russian naval presence in the Black Sea was similarly “very concerning”, he said.

“They are in the window where they could do anything,” he said.

However, he added that the “perverse reality” was that Putin’s moves had only strengthened NATO. “They have meant more military capability along the eastern flank. They have brought Ukraine closer to the EU and the United States. And they have strengthened the transatlantic bond. That is the reality we are dealing with today. ”