Who’s who in Downing St after Boris Johnson’s reset? 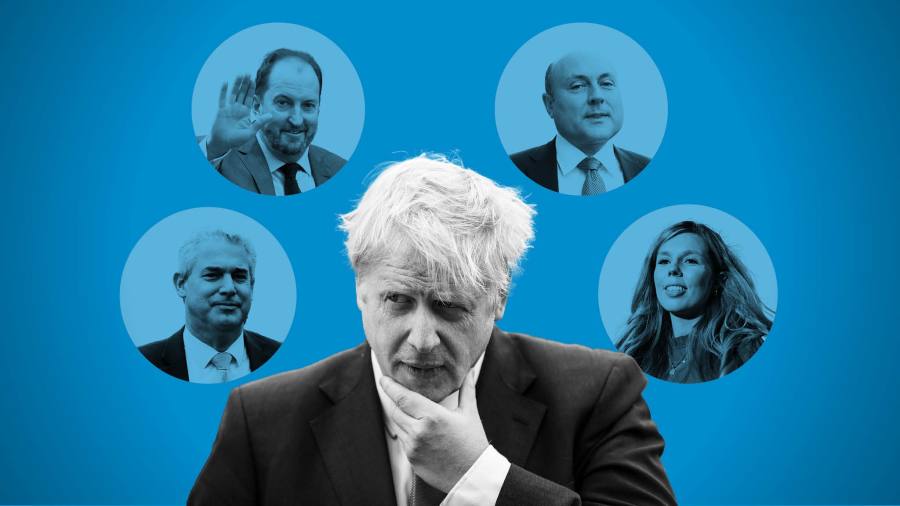 Boris Johnson’s “reset” of his Downing Street operation began on Monday with the prime minister singing Gloria Gaynor’s I Will Survivein an unlikely duet with his new communications chief, Guto Harri.

With many Tory MPs still openly discussing moves to oust the prime minister, Johnson needs his new team in Number 10 to turn things around quickly, after months of chaos at the heart of the British government.

Johnson’s survival strategy involves a number of key personnel changes, intended to reassure his party’s MPs that he can get a grip. The overhaul also represents a political shift to the right. These are the key figures:

Barclay, seen by Johnson as “Mr Fixit”, is the most important element of the new team, an experienced figure who already sits in the cabinet as the minister in charge of the Cabinet Office – the engine room of government.

A former Treasury minister and Brexit secretary, Barclay is charged with providing clear direction from Number 10, speeding up delivery of policies, building links to Tory MPs and ending factional infighting at the center.

“He demands high standards of data and delivery, he’s impatient with officialdom and he works incredibly hard,” said one ministerial colleague. Barclay is also seen as a brake on public spending.

The new chief of staff, who replaces Dan Rosenfield, is also a close ally of Rishi Sunak, the chancellor; his appointment may help to calm tensions between Johnson and his neighbor in Downing Street.

Some have questioned how he can be chief of staff, while also serving as a minister and MP. Barclay has told friends that most of his day-to-day work in the Cabinet Office will go to other ministers.

Harri worked at the BBC for 18 years before becoming Johnson’s director of external affairs at London’s City Hall. Johnson pleaded with him to sort out a Number 10 communications operation that fell apart during the “partygate” scandal.

The former journalist is a trusted but forthright adviser, who will expect Johnson to listen to him. In the past he has been highly critical of his “sexually incontinent” boss.

Cummings tweeted on Monday that Harri was “a pro-Remain lobbyist”, dubbing him “Huawei Harri” after the work he conducted for the Chinese telecoms company while an executive at public relations firm Hawthorn Advisors.

A spokesperson for 10 Downing Street said Harri’s work had been “entirely legitimate” and in the public domain. One minister said his appointment might help bring back “the happier Boris” from City Hall days.

However, Harri’s duet with Johnson, recounted to the Welsh language website Golwg 360, did not go down well with Angela Rayner, Labor’s deputy leader, who said: “They think it’s all one big joke, don’t they?”

Formerly an executive at Rothschild & Co and Sky, Griffith is a small state Conservative whose appointment is intended to placate rightwing Tory MPs who believe Johnson has abandoned the party’s core values.

Griffith, who replaced longtime Johnson ally Munira Mirza, also promised to reconnect policymaking to Tory MPs with the re-establishment of backbench “policy boards”, but some fear that this could lead to the party moving to a more ideological rightwing position.

Some “red wall” Tory MPs representing northern seats are nervous about a former City executive representing the wealthy Sussex seat of Arundel being put in charge of framing the next Tory manifesto.

In spite of his deregulatory enthusiasm, Griffith opposed reforms to planning rules, which might have allowed many more homes to be built in his constituency.

The fact that the prime minister’s partner is going nowhere has not stopped what her spokesperson has called a “brutal briefing campaign” by “bitter ex-officials” hoping to undermine her.

Carrie Johnson’s allies insist she plays “no role in government”, but some rightwing Tory MPs say the former Conservative media chief and her allies are to blame for a drift towards more progressive policies.

One Tory MP said Carrie Johnson and her friends in key Number 10 positions – notably Henry Newman, a senior adviser, and Baroness Simone Finn, deputy chief of staff – were to blame for “soft pedaling on Brexit and green policy” and for being too “Woke”.

Newman has been shunted out of Downing Street to work for his old boss Michael Gove in the shake-up, to the delight of some Tory rightwingers, who believe his departure will lessen Carrie Johnson’s influence. Downing Street insiders said he offered to leave to “take the heat off” the prime minister.

Sajid Javid, health secretary, said the attacks on the prime minister’s wife were “misogynistic”. He said: “It is sexist. I think the partners of politicians should be off limits. ”

David Canzini is set to take a senior role in Number 10 to improve relations with Conservative MPs. The longtime Tory staffer, has close ties to Sir Lynton Crosby, the Australian political adviser.

A popular figure among Brexiters, he advised Eurosceptic Tory MPs on the 2019 “Chuck Checkers” campaign, which fought against Theresa May’s compromise Brexit deal.

One Tory MP, however, said the hard-nosed Canzini would be divisive: “David is like Lynton without the finesse and tact. The Brexiter wing will be delighted but I’m not sure what the centrists will feel. ”


Why investors should worry about a fightback against activist Elliott